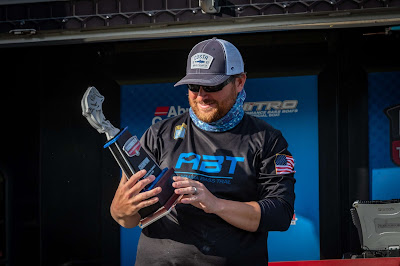 There were times Saturday when Jordan Wiggins wondered if he had enough magic remaining to write the fairy-tale ending for a special week on the Harris Chain of Lakes.

He had to work for it, but the 29-year old Cullman, Ala., resident proved in the end that dreams really do come true in central Florida.

Wiggins won the Bassmaster Team Championship Classic Fish-Off on Saturday with a two-day total of 10 bass that weighed 31 pounds, 9 ounces. His limit of 9-0 on Day 2 was significantly less than the tournament-best 22-9 he caught a day earlier, but it was enough for him to punch his ticket into the 2021 Academy Sports + Outdoors Bassmaster Classic presented by Huk.

The Classic is scheduled for March 19-21 on Lake Ray Roberts near Fort Worth, Texas. Wiggins is the 54th and final angler to qualify for the next edition of the biggest bass tournament in the world.

“I’ve been shaking all day just thinking about making it to the Classic,” he said shortly after receiving a congratulatory hug from his wife, Whitney. “I’ve dreamed of this ever since I’ve been going fishing and I’ve been fishing a long time. This is awesome; just unreal.”

Wiggins and his fishing partner Wesley Sams qualified for the Bassmaster Team Championship via the Alabama Bass Trail. They won the team portion of the tournament earlier this week with a two-day total of 39-8 and were one of three teams that advanced to the Classic Fish-Off.

Wiggins continued with the hot hand during the fish-off, when the top six anglers had their weights zeroed and started fishing individually. Wiggins’ 22-9 bag on Friday was anchored by a whopping 8-12 largemouth that was the heaviest catch of the week and gave him a 7 1/2-pound cushion heading into the final day.

Wiggins suspected the final day would be a grind, both mentally and physically, and it was. He fished all week on the same stretch of eelgrass and Kissimmee grass where Lake Harris meets Little Lake Harris, but the bite wasn’t nearly as productive Saturday as it had been the three previous days.

Feeling the pressure, he remained on the deck of his boat for seven consecutive hours, not even stopping to take a drink despite the 80-degree temperature.

Wiggins mustered a limit, but he was concerned one of his five competitors might catch a Harris Chain heavy and overtake him. They also failed to find big bass Saturday, however, with Andy Walls of the Minnesota B.A.S.S. Nation weighing the big bag (12-10) to finish second overall with 23-5. Sams caught 10-6 and placed third with 21-2.

“I knew when I put the boat in this morning that it wasn’t going to be a good day,” Wiggins said, noting the patchy cloud cover over central Florida on Saturday.

“If you’re in Florida and you don’t have much knowledge of the lake, you want the sun. It’s your friend, especially when you’re fishing grass. I still won by a good amount, but I’m disappointed I didn’t catch them better than I did. I’m just lucky the other guys didn’t have great days either.”

Wiggins threw a white Z-Man Evergreen ChatterBait JackHammer with a White Trash Little Dipper to catch every bass he weighed in both the team portion and the fish-off. He said the key was getting the bait nudged against the Kissimmee grass and moving it slowly through the small area between it and the eelgrass.

Wiggins had fished the Harris Chain before, teaming with Sams to finish 30th in the 2018 Bassmaster Team Championship. Both anglers said that experience gave them a chance to learn how the fishery works and they utilized the knowledge this year.

Wiggins also thanked his brother Jesse, who loaned him his truck to make the drive to the Harris Chain. Jesse is a pro angler with three previous Bassmaster wins to his credit, including the Southern Open on the Harris Chain in 2017. Jesse also fished in three Classics, finishing third in 2019 on the Tennessee River in Knoxville.

Jordan, 19 months younger than Jesse, said he and his brother are very competitive.

“He holds that over my head, that he’s fished the Classic,” Jordan said. “But now I’m going too, and he can’t say anything anymore.”