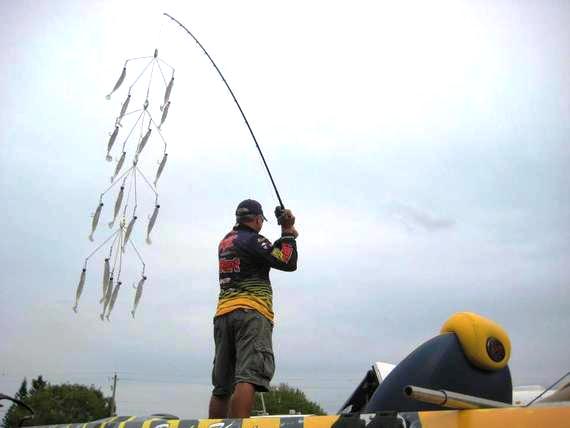 I've been emailed this photo a few times. It really shows how boring winter can be and how big the Alabama rig craze has become.
Posted by IBASSIN.COM at 7:54 PM 0 comments 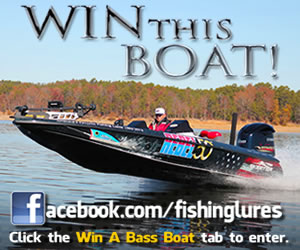 http://www.facebook.com/FishingLures
Win this Skeeter bass boat!
To celebrate 50 years of making America’s Favorite Fishing Lures we’re giving away a fully loaded 2011 Skeeter FX21 bass boat wrapped in Rebel 50th Anniversary graphics. It comes fully rigged with a 250 Yamaha SHO 4-stroke, Humminbird electronics, Minn Kota trolling motor, Power Pole and more. All you have to do is Like Lurenet.com’s Facebook page and submit your entry. Then, you’re in the running for this amazing grand prize, valued at over $60,000!

B.A.S.S. and Rapala challenges anglers to ‘snap to it’

BIRMINGHAM, Ala. — B.A.S.S. member Adam Tucker did it. Now B.A.S.S. LLC and Rapala are challenging other anglers to “snap to it” and enter the 2012 Rapala Photo Contest.
For the best snapshot, a monthly winner will receive six Rapala lures and recognition in Bassmaster Magazine. The photo must be of an angler with a bass caught on a Rapala lure. Fish size doesn’t matter, but photo quality does, and the Rapala lure used to land the fish must be visible in the photo. B.A.S.S. judges will select the month’s best submission based solely on those criteria. (Hint: make sure the digital camera is set to a fairly large file size because a tiny file can’t be turned into a magazine photo.) 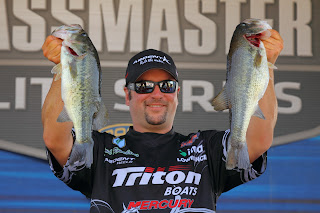 JOSEPHINE, Penn. – Picasso Lures is proud to announce the addition of Bassmaster Elite Series pro Fred Roumbanis to their pro staff.
Roumbanis, a 33-year-old pro from Bixby, Okla., has become one of the most popular anglers on the Bassmaster Elite Series since its inception in 2006. That's not to say that Roumbanis is all show and no go, Roumbanis has compiled a set of career statistics that would make any pro with 86 Bassmaster tournament entries jealous.
Read more »
Posted by IBASSIN.COM at 7:02 PM 0 comments 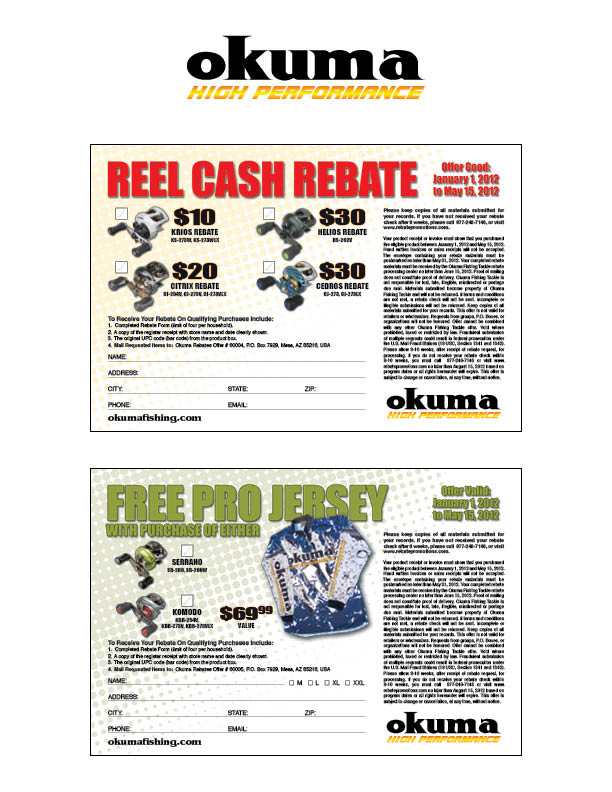 Many asked if the Okuma rebates will be offered in Canada. I double checked with the Okuma guy and yes they will. So, the next time you're at the tackle shop or the next Spring Fishing show have a look at the Okuma reels.
Posted by IBASSIN.COM at 6:51 PM 0 comments

ORLANDO, Fla. -- Chris Lane of Guntersville, Ala., made it look easy on Florida’s Harris Chain of Lakes in the kickoff event of the 2012 Bass Pro Shops Southern Open series.
Lane was the only angler to weigh in 20 or more pounds of bass each day on the way to his third B.A.S.S. win, totaling 72 pounds, 11 ounces over the three-day tournament. Clifford Pirch of Payson, Ariz., finished second with 58-1.
All of Lane’s Bassmaster victories have come in Southern Opens. His first two, in 2006 and 2010, came on Lake Okeechobee.
“I got tell you, I had an emotional ride over here,” Lane said. “My dad had a little episode about 3 weeks ago. I’m just glad he’s here to see it.”
Citing the need to slow down and fish his areas thoroughly, Lane used a variety of baits to claim the title and a provisional berth in the 2013 Bassmaster Classic on Oklahoma’s Grand Lake o’ the Cherokees, Feb. 22-24. If Lane fishes the remaining two events in the Southern Open season, he’ll cement the spot in bass fishing’s greatest championship.
“I caught fish on several soft plastics, including 7-inch Gambler Sweebo worms, Gambler Cane Toads and the Gambler Big Easy, but I found my bass with a chartreuse Luck-E-Strike RC2 crankbait,” Lane said. “I used it as a search bait. When I found bass with it, I’d pick up the soft plastics and really work the area over.”

OKEECHOBEE, Fla. – Win a major bass tournament once on a particular lure or technique and it gets a little attention. But win the same tournament two years in a row on the same lure and technique and suddenly you have garnered a lot of attention.
Such is the case with 29-year-old Brandon Medlock of Lake Placid, Fla., who has now won the EverStart Series Southeast event two years in a row with the same lure.
In last year’s January event, Medlock posted weights of 28-01, 16-05 and 19-02 for a three-day total of 63-08. This year he outdid himself with weights of 17-8, 35-7 and 15-3 for a three-day total of 68-2.
The win earned him yet another $35,300 payday.
“The first time I won, I was in shock,” Medlock said. “And to win again, now I’m even more in shock. I just don’t know what to say.”

Anyone know the name of this worm?

It was a day of regulars and records on the Harris Chain of Lakes at the Bass Pro Shops Southern Open.
The regulars were local anglers like Chris Lane and Tim Frederick, who continued to show their dominance. The record – at least for BASS history on these waters – belonged to Bassmaster Elite Series rook Jared Miller of Norman, Okla.
Lane, formerly of Lakeland, Fla., and now residing in Guntersville, Ala., had another stellar day after weighing in 20 pounds, 8 ounces Thursday. His 5-bass limit weighed 23 pounds, 14 ounces, giving him a two-day total of 44-6 and the lead going into the final day of competition, but he said it wasn’t easy.
“I really had to slow down and change some things,” Lane said. “The fish changed overnight because it was a little colder. The water temperature was 58 degrees this morning, when it had been in the low 60s on previous mornings.”
Lane has been remarkably steady thus far, but admits things can change in a hurry on the Harris Chain.

20.Jan.2012 by Rob Newell
FLW PRESS RELEASE
OKEECHOBEE, Fla. – Before the EverStart Series event on Lake Okeechobee began this week many participants thought it would be possible to see a 30-pound plus bag of fish put on the scales.
But after the day-one weigh-in where only one limit broke the 20-pound barrier, the hopes of seeing a 30-pound limit of fish kind of wilted away.
Today, Brandon Medlock of Lake Placid, Fla., showed the Okeechobee weigh-in crowd what they wanted to see: a five-bass limit weighing 35 pounds, 7 ounces. That’s not a misprint: 35 pounds, 7 ounces.
Medlock’s monster mash brought shock and awe, anchored by a 10-pound, 8-ounce Big O giant that easily took the big fish honors.


Here is the top 20 weights. It is crystal clear that some anglers found a few big ones.

19.Jan.2012 by Rob Newell
FLW PRESS RELEASE
OKEECHOBEE, Fla. – The day-one takeoff of the EverStart Series Southeast event on Lake Okeechobee was like Christmas morning all over again. Even before dawn broke the horizon, anglers were delirious with anticipation over opening the many gifts that Santa-chobee had promised them.
Those gifts were in the form of tight green mats of vegetation, adorned with bows of hyacinths, and anglers could not wait to see what big green monsters lived inside the promising packages.
But it appears that perhaps not all anglers had been good boys this year as many were sorely disappointed with what they received. By noon some pros would have even been happy with a couple of stocking stuffers for their empty livewells.
In short, the numbers of 20-pound limits – and even 30-pound limits – that were predicted failed to materialize, leaving many pros scratching their heads. Instead, one lone 21-pound, 6-ounce bag broke the 20-pound mark.
Some of the usual Big O suspects still topped the leader board at day’s end, but all were at a loss as to happened to their fish. The number of bites pros were receiving fell off dramatically. The large concentrations of fish that continually thumped lines in practice had evaporated, leaving those who did well to scramble way more than they had planned to.
Read more »
Posted by IBASSIN.COM at 10:07 PM 0 comments

Both B.A.S.S. and FLW started their Southern divisional tournaments today. FLW is on Lake Okeechobe and B.A.S.S. started on the Harris Chain of Lakes. Each are big bass waters but very different bodies of water.

The Harris Chain is a network of canals, lakes and dead ends. Staging bass commute these areas looking for spawning areas. Bass and bass anglers need to navigate endlessly to reach quiet spawning grounds. Anglers and bass hope to find a secluded area out of view of prying eyes.

Considering the blast of cold weather we just got, it is difficult to consider mid-January as the start of the tournament season. Yet, even as most of us reach for a heavy jacket, anglers are getting ready for the start of the FLW EverStart Southern Division on the Big O.

Drop shotting is a great technique. Heavy drop shot is a great adaptation on this proven technique.  Exchange the light line and spinning gear for a flipping rod and braided line will allow you to fish the drop shot rig in places your never imagined. Its a great way to present soft plastic baits in deep grass, standing timber, drop offs and other deep bass locations.
Posted by IBASSIN.COM at 6:24 PM 0 comments

Here is a look at the X-RIG


Weights will be 2 or 3 assorted per pack. Lead natural colour. Pricing to come.

Here is a look at the new Croaker Frog by Vok.

It's been a busy week. Sorry for not getting the new info to you sooner but I've been writing article after article. So what is new? Considering the holidays are over and the weather is finally cold, a lot of bass fishing stuff is new.

Alabama Rigs
I also most had the new Guru's "Rig" in my hands. They just arrive Wednesday morning while I was shopping.  I wasn't going to be close to the office so I couldn't scoop up a few samples. Next week, I should have some time to pass by and get some. Expect some photos sometime midway through next week.

New Frogs
There are 2 new hollow body frogs for this year from Vok Fishing. The truly life like model is called a Croaker frog and the more traditional bait is called a Samrai Frog. Photo coming ASAP.

X-Rigs
I got a phone call early this week. The designer of the X-Rig scolded me for using such a poor picture of the rig. So, I have samples of a few sizes so expect some much higher quality photos of the X-Rig shortly.

"Set The Hook" Introduces the CX4-D, CX4 and CX2
Peter Savoia, owner of Set the Hook, has released his version of the Alabama Rig.  Creatively called the CX4-D (Canadian X4 Dragger. patent pending) and the CX-4. He also has a two arm one called CX2-W (Canadian X2 walleye rig).

Here are the stats on the rigs
The CX4-D and CX4 (traditional Alabama Rig design)
- Designed for dragging on the bottom with two prongs
- Made in Canada
- constructed with .040 Stainless Steel wire
- 30lb duo-lock stainless snap swivels (snaps can be removed to just have the barrel)
- 3 D eyes
- Hard epoxy finish
- Legs are 6" long straight
- 3/4 and 1/2 oz heads versions

Designed for trolling two worm harness
- 050 stainless steel weir
- only available in 3/4 oz
all the same features as the cx4.

Fastach's new X Rig is the answer for all who were looking for a Jika Rig. This version uses the unique Fastach system which allows anglers to quickly slip on or off any size of weight. This rig substituted the welded O-ring with a small yet ultra strong swivel to provide a solid line tie and prevent line twist. Using custom VMC worm hooks, this X Rig is ideal for finesse all the way to heavy cover presentations.  Expect them in stores in 2012 at a very reasonable price.
Posted by IBASSIN.COM at 1:28 AM 0 comments