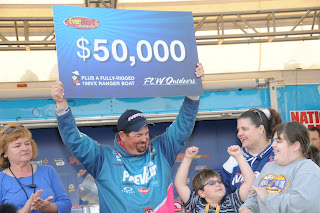 PARIS, Tenn. – Through out the practice period of the EverStart Series Championship on Kentucky Lake, well-known Kentucky Lake pro Dan Morehead privately maintained that at least one of the four tournament days he was going to go big with the Alabama rig.
“I’ve been to some of my old stomping ground with the rig and it’s been unbelievable,” Morehead said before the tournament began. “I’m not going to sit here and say that I’m going to catch 20 pounds on it everyday – I think I can realistically catch 12 to 15 pounds a day on it for sure. But at least one of those four days it’s going to get right and I’m going to have 20 pounds with it.”
And today was that day. After calling his shots with daily catches of 15-3, 12-12 and 14-0 the last three days, Morehead saved the best for last, hauling in a final-day catch of 19 pounds, 5 ounces and giving him a four-day total of 61 pounds, 4 ounces.
Read more »
Posted by IBASSIN.COM at 10:56 PM 0 comments

Dan Morehead of Paducah, KY., used every bit of his local knowledge to win the FLW EverStart Championship on Kentucky Lake. Everyday, the leader board shuffled due to moody bass and fluctuating weather. Morehead put together consistent limits throughout the tournament and save his best for last. Sunday's creel totalled 19-05, Dan's best bag of the week and the heaviest of the final day. He edged out Jim Tutt of Texas by 6 pounds. More details will follow on how he won. Speculation is very high that the Alabama rig, a multi-lure contraption with fever pitch popularity, played a vital role in Dan Morehead's win.

Combs put together a five-bass limit weighing 27 pounds, 4 ounces, for a total of 55-12 to hang onto the lead going into the final day of the world championship on Lake Conroe. He’s still ahead of Toyota pro Mike Iaconelli of New Jersey, who had 25 pounds Saturday and trails with 51-12.

“It’s a grind, it really is,” said Combs, who guided on Lake Amistad in Del Rio before moving east to Huntington earlier this year. “I caught a 6-12 pretty quickly with the second flight going by me, and then another one but then went about three hours before I caught another one.”

Zoom pro Todd Auten of South Carolina surged into third place after switching gears from shallow to deep water Saturday. He caught 24-4 and has a total of 41-12, well behind Combs and Iaconelli … although one big bite on Conroe could swing the pendulum and two big bites could be a complete game-changer.

Today the common theme among Kentucky Lake leaders was shad and/or current far down the Tennessee River.
After following up his 17-pound, 11-ounce day-one catch with a strong 16-pound, 13-ounce limit today, Lendell Martin of Nacogdoches, Texas, now leads the EverStart Championship with a two-day total of 34 pounds, 8 ounces.
While Martin has admitted to throwing the Alabama rig when he returns to the Paris area every afternoon, it’s not his primary lure – or lures – when fishing down in Tennessee.
“I’m fishing suspended fish, off steep breaks that fall of into 20 to 25 feet of water,” Martin said. “The last two days I’ve pretty much just fished two spots that keep replenishing. It’s really all about the shad, when the shad show up, the bass start biting. The fish are not necessarily schooling – occasionally I do see one bust a shad – mostly they’re suspended and when some shad come by it gets the bass active and I can catch one or two pretty quick.”
Read more »
Posted by IBASSIN.COM at 8:12 AM 0 comments

Texas Pro, Lendall Martin proves consistency is the ticket on Kentucky Lake this week. His day 2 creel of 16-13 coupled with yesterday's bag of 17-11 was enough to take the lead. Martin's 34-08 proved the big bite is off. Marrtin is a veteran angler who competed on the Bassmaster trail in the late 1980s and 1990s. He knows how to fish and play the game. If his fish don't move, he'll catch them.

Here is a quick look at the EverStart Championship tournament on Kentucky Lake. Considering all the hype surrounding the new super Alabama Rig, this tournament is clouded in a lot of mystery. With so many future super stars fishing, this Championship might be the launching pad for the legends of tomorrow.

Last of 2011 Tour Opens settles Forrest Wood Cup berths
23.Oct.2011
FLW PRESS RELEASE
GUNTERSVILLE, Ala. – Pro Paul Elias of Laurel, Miss., caught a five-bass limit weighing 23 pounds even Sunday to lead wire-to-wire and win $100,500 at the Walmart FLW Tour on Lake Guntersville presented by Mercury with a four-day catch of 20 bass weighing 102-8.
The catch gave him the win by an amazing 17-pound, 3-ounce margin over Robert Behrle of Hoover, Ala., who caught a total of 20 bass weighing 85-5 and earned $34,021.
Elias came up just short of the previous FLW Tour total tournament weight record of 106 pounds, 10 ounces that was set by Brandon McMillan of Belle Glade, Fla., at the 2011 season opener in February at Lake Okeechobee. Elias said the Guntersville event marked the fourth time he has cracked the 100-pound mark in tournament competition.
“Somehow the Lord blesses me and I manage to win one of these things every three or four years,” said Elias, who boosted his career winnings to $1.29 million. “To be 60 years old and to be able to compete against these young guys … it’s great.
“I am worn slam out,” Elias added. “I’ve only won one other tournament where I led every day, and it’s exhausting.”
Read more »
Posted by IBASSIN.COM at 10:10 PM 0 comments

﻿
﻿ Legendary super pro, Paul Elias wins his first FLW tournament plus $100 000 cash payout on the strength of the little known Alabama rig. Catching 102-08 pounds for 20 bass, he easily dominated the field of anglers. His performance was flawless. He caught 40 pounds more weight than tenth place angler Alex Davis who had a respectable four day creel of 62-10 pounds of bass.

More to follow on the win and Paul's use of the Alabama rig.
Posted by IBASSIN.COM at 7:50 PM 0 comments

Email ThisBlogThis!Share to TwitterShare to FacebookShare to Pinterest
Labels: Paul Elias bass fishing+ rigging + how to fish+ how to use + luigi de rose, who won the flw tournamnent on lake guntersville

The Alabama Rig? What is it?

Once every few years, some one creates a crazy bait that is a killer. As of recent, we have witnessed the wildly creative Chatterbait and Jika Rig. Think of how strange that first Senko or Gitzit looked but nothing is as wildly weird as the Alabama rig. What is it? It's a modified salt water umbrella rig that is used for trolling for stripe bass or blue fish. Over the past few days, Paul Elais, 1981 Bassmaster Classic Champ, has dominated the FLW Lake Guntersville tournament with one. He is attaching 5, yes 5, swimbaits to it and just killing the bass and other competitors. Actually, almost all of the top five pros are all using this rig. More will come of it for sure. Check out the photos and rig at http://www.thealabamarig.com

More details to follow
Posted by IBASSIN.COM at 4:44 PM 0 comments

With the Lake Simcoe Open, sponsored by Bass Pro Shops, only days away, I wanted to find out how the bass have been biting. Last year, the conditions were ideal for a smallmouth slam and that was what happened. Two major league records were broken: heaviest 5 bass tournament creel of 31.5 pounds and largest bass, a 8.05 pound smallmouth, ever weighted in a tournament in Canada.
The Bass Pro Shops Lake Simcoe Open has become Canada's premier one-day bass fishing tournament; especially if smallmouth are your game.  Largemouth rarely factor in this tournament and considering the last few years a limit of 25 pounds didn't raise an eyebrow, this is a true trophy smallmouth fest.
Read more »
Posted by IBASSIN.COM at 9:50 PM 0 comments

Fall can be a tricky time to catch smallmouth and largemouth bass. Learn from outdoor writer, Don Sangster as he explains his views on selecting the correct colours and styles of jerkbaits.

Ibassin.com goes fall smallmouth fishing with fellow outdoor writer Don Sangster. It is Canadian Thanksgiving and we hope the smallmouth are eating more than just turkey. Come along and check out how Luigi De Rose and Don Sangster figure out how to catch smallmouth in a deep, clear lake.

Happy Thanksgiving!
Was on the water yesterday with outdoor writer Don Sangster and we had a good day. Here are some tips that worked for us. Morning was clear, calm and warm and it was jerkbait time. Make sure you bring a few deep diving ones. Don caught some on them. Twitching it really slowly seemed much better than the rapid jerking I was doing. Once the day warmed and a ripple was on the water, it was all spinnerbait. Working it fast and jerking the bait around paid off.

We shot some video of the day and it will be on the YouTube channel soon.
http://www.youtube.com/user/ibassindotcom

Enjoy a great weekend and get some fishing in!
Posted by IBASSIN.COM at 10:20 AM 0 comments

COLUMBIA, S.C. - With a complete field of 150 teams, the third annual Berkley B1 Bass Open took place on Lake St-Francis in southwestern Quebec with tremendous success. The team of Jason Gramada and Nicolas Gendron claimed the event with 48.02 pounds of smallmouth. Anchoring the winning teams winning weight was a 6.53-pound giant, which also claimed the Lunker award.

“The B1 experience is the ultimate platform where all anglers, young and old, experienced or newcomer can truly come together to celebrate this great sport.” said Gendron. “We are humbled by the grandeur, respect and support from all our peers.”


Hollow body frog fishing is at a fever pitch these days. Ish Monroe used one to reach glory at the recent BASS Open on Lake Oneida in New York state. Many anglers, including Ontario angler Cory Johnston worked one this past weekend on the Potomac River at the FLW EverStart tournament. A lot of baits are out there making it difficult to pick the right one for you. Here is a list of some great frog baits. It is not a complete list but it does include a few unique and rarer frog style baits. So, if you are a connoisseur or just starting out, check out them out.

Maryland native scores back-to-back EverStart victories on same body of water two years running
01.Oct.2011
FLW PRESS RELEASE
MARBURY, Md. – Heading into the 2011 EverStart Series Potomac River event, Bryan
Schmitt of Deale, Md., didn’t have quite the same vibe he had a year earlier when he scored a relatively easy victory on the Potomac. For starters, he was battling a severe cold all week. Secondly, he had a horrible practice. And finally, the weather conditions that anglers faced all week were as difficult as they come.
However, in the end none of that mattered. When all was said and done, Schmitt once again was able to hoist the first-place trophy as he pulled off one of the greatest victories of his career.

Bryan Schmitt wins on the Potomac River. Cory Johnston come in second and Mike McDonald closes with third. The majority of the bass were taken on chatterbaits, frogs and jigs. Wild northern winds altered the tides causing grief for most. Co-angler Terry Stevens of Sterling, VA was the champion in the armature rankings with 15 bass for 37-10 More details come soon.