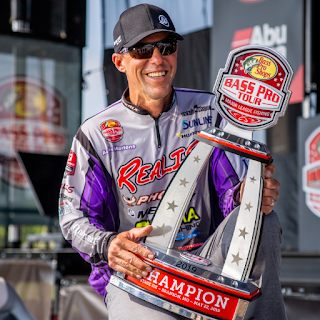 Cancer has gripped two popular MLF pros in recent days. Aaron Martens has undergone 2 brain surgeries after suffering seizures while fishing on Saturday, April 11. Surgery and testing confirmed cancer tumors in his brain. He will under go future radiation and chemo to combat this disease. Aaron's strong physical character has been a blessing as he is up and active as he recovers from surgery. Aaron is very appreciative of his fans and is trying to remain strong as he prepares for his next step towards recovery.

Fellow MLF pro, Shaw Grigsby notified his friends and fan with a Facebook post that he underwent kidney surgery earlier this week. He indicated that doctors discovered his cancer very early and expects the surgery to be a success.

On his Facebook Fan page, Shaw wrote, "It’s sad that so many of my friends and family have had to deal with Cancer during their life time. Now it’s my turn. Kidney surgery scheduled for 7:30 am tomorrow (April 28, 2020). Doctors say that they found it early so everything looks good. Should be back fishing in about 4 weeks."

IBASSIN.com wishes both anglers and their families strength and plenty of prayers for a speedy recovery.
Posted by IBASSIN.COM at 2:00 AM 0 comments

Check out these cool topwater smallmouth hits and all the action taken from a trip I did with Eastern Canadian Outfitters in Quebec. We had a great stay and the bass fishing action was better than I ever expected. Where I fished: https://easterncanadianoutfitters.com/
Posted by IBASSIN.COM at 1:30 AM 0 comments

Now in its fourth year, Shimano continues a key initiative to its ‘Varsity Program’ with a scholarship program to students pursuing careers in fisheries, conservation, and natural resources management. Complete information and the downloadable application form can now be found on the Shimano web site at: Shimano-B.A.S.S. Scholarship Program

Partnering with B.A.S.S. – high school seniors and both undergrad and graduate students must be a member of the organization to apply for the scholarships - the key mission behind the program is to keep the awareness level high in the decline in resource management professionals who fish among high school and college-age anglers, and advise them on the career opportunities available at the state, regional, provincial and federal levels.

Applications for the Varsity Program scholarships are being accepted through June 15, 2020. According the Shimano Youth Fishing Coordinator Frank Hyla, “three of our past scholarship winners are now working with state fishery agencies now that they have graduated, and not only do we look forward to seeing those ranks rise but also the impact these young adults can have on fishing and conservation efforts in their respective states.”

Hyla notes the scholarships are for studies beginning in fall 2020, with up to ten $1,000 scholarships going to U.S. and Canadian high school seniors, college undergraduate and graduate students who are members of B.A.S.S., and majoring in biology, fisheries, wildlife or a natural resource-related fields. Winners will be notified by July 1, with the award being made directly to the student for use as needed for tuition, textbooks or living expenses.

For more information on the Shimano Varsity Program contact Frank Hyla at fhyla@shimano.com.

What is better? Spinnerbaits or Chatterbaits?


Bladed jig or spinnerbait? Which one is the best to fish where? BASS Elite angler Brett Hite is a master at both. Learn as he explains when to fish the bladed jig and when to use a spinnerbait. Brett won his first Elite tournament with a bladed jig. Brett helped create the Evergreen Jackhammer Chatterbait which just got released to the North American market.
Posted by IBASSIN.COM at 2:30 AM 0 comments

Email ThisBlogThis!Share to TwitterShare to FacebookShare to Pinterest
Labels: What is better? Spinnerbaits or Chatterbaits?


Angler's Choice sends IBASSIN.com a care package during this crisis. Check out this UNBOXING and see what great bass baits were sent from Angler's Choice. Let's see if they sent us their famous Kill Shot or Ned Hawg baits.
Check them out at: https://www.anglerschoice.ca/
Posted by IBASSIN.COM at 2:00 AM 0 comments

Corvid 19 has claimed another victim, the 2020 ICAST SHOW scheduled for July in Orlando. Produced by the American Sportfishing Association, the International Convention of Allied Sportfishing Trades (ICAST) is the world’s largest sportfishing trade show. With over 225,000 net square feet of exhibits under one roof, it continues to be the place where the most valuable business relationships are born, strengthened and celebrated.

Here's their official statement:
For more than 80 years, the American Sportfishing Association has created a legacy of working hard to ensure our industry’s future. Nowhere is this more evident than at ICAST, our industry’s trade show, where lasting friendships and business partnerships have been forged and fostered.
However, given the ongoing stay-at-home orders and the desire to keep the health and safety of everyone in our recreational fishing family first in the decision-making process, ASA’s board of directors made the decision to cancel the physical ICAST Show that was scheduled for July 14-17, 2020, at the Orange County Convention Center in Orlando.
Two weeks ago, we asked for your patience as we strived to make the best business decisions we could on behalf of our exhibitors, members, staff and all our show attendees. Cancelling this year’s show was the only decision that could be made when considering everyone’s well-being and the impact the pandemic is having on the sportfishing industry and our economy.

Shin Fukae is one of the very best on the FLW Tour and BASSMASTER Opens. He can credit much of his success to the drop shot rig. Heck, he qualified for the 2016 Bassmaster Classic with a win using a drop shot. Listen to how Shin sets up this gear and his top baits.
Posted by IBASSIN.COM at 2:00 AM 0 comments

Now that we are all practicing proper physical distancing, we want to challenge you to show us how you’re staying motivated for the season ahead while at home. We have received a bunch of inspiring stories of what you are doing to stay motivated, prepared and focused for the fishing season ahead! So, we wanted to give you a place to share your stories. In return, we will be gifting 50 Rapala prize packs at random. We will also feature some of your posts on our Insta page.
Entering is easy! Simply snap a pic or take a video of you staying motivated for the fishing season and post it tagging us @rapalacanada and use the hashtag #FocusOnFishing in the caption. You must also challenge 3 or more fishing buddies by tagging them(eg. “I nominate @buddy1 @buddy2 @buddy3”). Use other posts below for ideas or check out our Insta page for a list. Don’t be afraid to think outside of the box because we aren’t afraid to give away extra prize packages to super creative, inspiring or motivational posts!
Be safe, be patient, but be ready for the end of this storm. Make the most of the fishing season ahead by staying motivated and preparing now. After all, success is where preparation and opportunity meet. And you know the opportunity is coming!
Posted by IBASSIN.COM at 2:00 AM 0 comments


Domo's Custom Tackle is a regional jig company that makes some of the very best tube, football and walleye jigs available. Located in LaSalle, Ontario on the shores of the Detroit River, Domo is a favorite among pros and weekend angles for their top quality jigs. Go check them out at: https://leadheadjigs.com/ or on facebook: https://www.facebook.com/Domos-Custom-Tackle-1434043270181523/ This video is an unboxing as Domo sent IBASSIN.com a care package to help us get ready for the new bass season.
Posted by IBASSIN.COM at 1:30 AM 0 comments

Spring time Advise from the Master!

Spring time in Florida is the kick off to a new year of bass fishing. One of the very best at catching bass, including giant bass, is Shaw Grigsby. This Florida legend and TV host knows how to find and catch bass during the pre-spawn and spawning periods.
Posted by IBASSIN.COM at 1:30 AM 0 comments

Japanese lures are very well known but a lot of secrets have yet to be revealed. Check out this new IBASSIN.com video as we discuss swim jigs. We highlight a few jigs and what sets them apart from jigs found in the American or Canadian markets. Swim jigs are a great year round bait. They're more finesse than a chatterbait. More weedless than a spinnerbait and offer way more bulk and vibration than a worm. 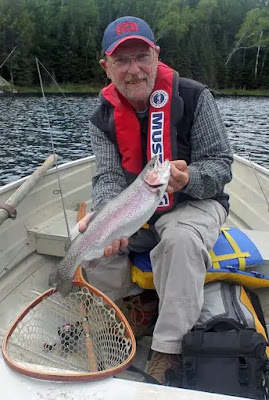 John Kerr was the first Ontario OUT OF DOORS Magazine personnel I ever met when I was asked to come in for a meeting. That was in the mid-1990s in the old Toronto Sun Building. John was a legend then and he still is now. When we first met, he might still have been the Fishing Editor, then my Managing Editor and closed out his career as Editor with Ontario OUT OF DOORS magazine. Over the years, John mentored me on fishing, life and writing.

Best known for his writing, John was even a better angler. Skilled at catching anything from panfish to walleye. For much of the 1970s and 1980s, no one was better at steelhead trout than John. If you have every used a long, whippy trout rod, then you have a connection to Kerr. An early advocate of light line, floats and long rods he was the best. Fellow OOD writer Drew Myers, son of past Editor and Associate Publisher Burton J. Myers, told stories of John catching double the trout in a one bend of the Ganaraska River than all the other anglers combined. He was that good. I never fished with John. I wasn't cool enough. I did spend a few autumns in a goose blind with John. He was a good shot mostly because he was my boss and I always let him shoot first.

To say John knew a lot is a huge understatement. He was on a different caliber than anyone I ever spoke to. John knew what wind was best for casting spoons to brown trout from a pier. He knew when to shift locations just based on the length of grass he fished. John's brain filed the names of every productive bay, creek or hump like they were old friends. I wished I could have tapped into John's volume of fishing knowledge more but he held his cards close; as legend usually do.

John was a character and most have their own stories to share. My wife was always impressed with John's voice. His tone was always deep and serious. She would urgently alert me if he left a phone message. She worried as his voice sounded so serious. Burt Myers always told the story of how John always attempted to loose Burt when they fished in separate boats. Furious, Burt reminded John that he was the boss but this never phased John.

I am sure John's close friends and family have volumes of memories to share. Personally, when I remember John, I also reflect of my late dad who fell ill to cancer almost to the day John was first diagnosed. At least John lasted two extra years than my father.

Thanks John for being a totally cool guy.

Here is Steve Galea's write up on the passing of a John Kerr.

The Godfather of Finesse Fishing, Don Iovino has teamed up with Major Craft to create the Zoner Hunter Crankbait that works just like the original Storm Wiggle Wart. It hunts and deflects off cover perfectly at a fraction of the price.
Posted by IBASSIN.COM at 8:44 AM 0 comments