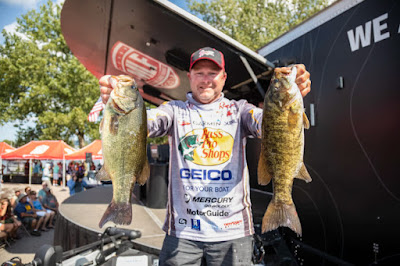 LA CROSSE, Wis. – While there was a level of excitement shared among the 25 pros in Group A that set out on the Mississippi River for the first day of Qualifying Round action in the Tackle Warehouse TITLE Presented by Mercury, uncertainty was another frame of mind they all had in common.

Water level and clarity on the Mighty Miss had changed almost by the hour thorough practice – with that, the smallmouth and largemouth were equally as fickle. With a full day between Sunday’s final round of practice and today’s competition, so much could have changed.

Picking up where he left off in practice, Mike McClelland set the pace on Day 1 with a limit weighing 13 pounds, 12 ounces to take a 2-ounce lead over Alex Davis heading into Thursday’s final round of competition for Group A.

One thing playing into McClelland’s hand this week is the the fact he’s made several trips to the Upper Mississippi River over his career and has witnessed it in low water years to flood stage.

“The fortunate part about my practice is that I’ve actually fished here when the river was down,” McClelland confirmed. “It seemed like every time we showed up for a tournament in the past a massive flood hit, so anything I did in practice didn’t actually work. This week as we got to town there was localized heavy flooding, the river came up a foot and a half, two foot – maybe a little more – and muddied the water up and really messed some areas up.

“It forced me to look at something that many years ago I was fortunate enough to know some guys in this area, back when we could get information, and learned how to run around on these places and had two different guys tell me over the years that an area could be hot. Man, so many times I came up here and caught ‘em, but two nights before the event had a flood and I never got to fish the area. This was the first year I truly got to fish the area during a tournament.”

With his spot producing well on Day 1, McClelland is hopeful that his experience on the Bass Pro Tour may help him in the hybrid-format event.

“My success on the Bass Pro Tour has not been astounding,” McClelland admitted. “I’ve had my ups and downs and the grinders are the ones I do better in. This event, I felt like a lot of guys without the experience of knowing how many fish live in these areas may lay off them a little bit. I’ve seen places on this river where you can literally catch 25 or 30 2 ½- to 3-pounders when it was good. I wanted to get as much out of that area as I could and I’m looking forward to Thursday.”

Pulling into his primary spot, McClelland got the day rolling with a good bite quick.

“I was able to settle in and caught that good largemouth right off the bat,” said the Blue Eye, Missouri, pro. “I caught a couple just solid 1 ¾ smallmouth and it allowed me to learn exactly how these fish were positioned and once I figured that out it really took fire.

“It was pretty incredible the number of bites I got, I just hope I didn’t lean on ‘em too hard today. One thing I was thinking is I’d rather lean on ‘em today than let somebody that might happen on them tomorrow blister ‘em. Hopefully after having a day off they’ll be ready to bite.”

As far as his bait selection goes, McClelland isn’t set in his ways, opting for a bit of variety to give the fish a fresh look.

“The whole thing for me this week has really been open-minded,” he said. “Typically, this place has been so well-known for a swim jig, and not necessarily a big, bulky swim jig, but more of a finessier swim jig. For me this week, the swim jig has caught a few, it caught the better largemouth today, but I’m actually throwing a 3.3-inch Big Bite Baits Pro Swimmer.

Sitting just a few ounces off the top spot and very much in the hunt to qualify for the Championship Round with a Group A victory in the Qualifying Round, Alex Davis says winging it during a tournament finally paid off.

“I was going to go throw a frog, but then I was like, ‘Oh, let me stop on a place I had some bites in practice’ and I caught a double on my second cast,” Davis said. “Then I caught seven or eight shorts and thought I better go somewhere else, but then I caught another. From there I just practiced.

Also weighing a mixed bag, yet never running his primary pattern, Davis is eager to hit the water come Thursday.

“I at least have something to fall back on,” Davis said of his primary pattern. “But I’m going to at least keep trying this because I caught ‘em and had fun. It’s awesome, I can’t wait to go again.”

As is usually the case in MLF format events, the field will be split into groups over the first four days of the event in the Qualifying Round. The winner of each group will advance to the Championship Round and pros who finish in second to 10th place in each group will battle it out with zeroed weights in the Knockout Round. Then, the top eight pros from the Knockout Round, plus the two group winners, will fish with zeroed weights again on the sixth day of the event, which is the Championship Round.

Throughout, there will be standard weigh-ins each day, and the competitors won’t have access to SCORETRACKER® to know how they stand during the day.

Wednesday will mark the start of competition for Group B in the TITLE where the likes of Ron Nelson, Brad Knight, Skeet Reese, Justin Lucas and Matt Stefan will battle it out against the rest of the 20 pros in the group. With the water levels stabilizing, the bite should only get better as the week pushes on.

You can catch all the action from competition Wednesday on the MLF NOW! live stream, starting at 7:30 a.m. CT.