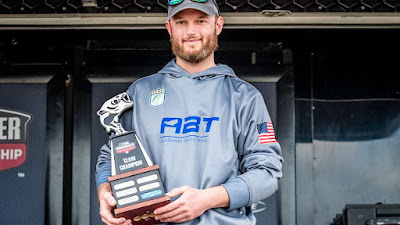 EUFAULA, Ala. — Shane Powell saw the Bassmaster Team Championship and the ensuing Classic Fish-Off as his chance to settle unfinished business.

Now, after watching friends and former Auburn University teammates reach the Bassmaster Classic in previous years, his time has arrived.

Powell won the Bassmaster Classic Fish-Off portion of the Team Championship here on Lake Eufaula Saturday, less than an hour from his lifelong home of Dothan, Ala. His two-day total of 23 pounds, 5 ounces was the best of the six anglers that survived to make the fish-off, and it earned him the final berth in the 2022 Academy Sports + Outdoors Bassmaster Classic presented by Huk when it’s held March 4-6 on South Carolina’s Lake Hartwell.

The victory was no easy feat, with heavy rain, dense fog and significant temperature swings throughout. The conditions confounded anglers, from the 378 who competed in the team portion Wednesday and Thursday, to the final six who competed the past two days in the fish-off.

Powell credited a slight warming trend overnight for Saturday’s better catch. He had five-bass limits both days of the fish-off but improved from 10-2 on Day 1 to 13-3 on Day 2.

“A buddy texted me last night and said if it was meant to be, that everything would fall into place. And it did.”

It was that kind of week for Powell, who teamed with Alabama Bass Trail partner Tim Fox to catch 27-4 and finish second in the two-day Bassmaster Team Championship that concluded Thursday. Fishing alone Friday, Powell stitched together enough weight to give himself a 1 1/2-pound lead heading into the final day.

But with five anglers hot on his heels, Powell knew he had to keep the pressure on the field. His knowledge of the lake, not to mention confidence in its ability to produce winning bags, allowed him to do just that.

Powell said most of his bass were caught in approximately 20 feet of water and off the old Chattahoochee River ledges that remain in the Eufaula impoundment.

“The first day or two, we caught them on a Strike King 6XD crankbait,” Powell said. “I went to a morning dawn (pink) drop shot when things got tougher and tougher ... It was all largemouth coming off the bottom.”

Powell and Fox won an Alabama Bass Trail tournament on Eufaula in March, and the champion said he's been eyeing a return to the storied fishery since.

“This was an extremely tough tournament,” Powell said. “But I knew we had to stick with it. Every cast we made this year was about trying to get back here for the Team Championship and into the finals. And If you think of the percentages of all this panning out, it’s crazy.”

Powell said he knows nothing about Lake Hartwell, but he's heard plenty about fishing in a Bassmaster Classic from former Auburn teammates who’ve participated in pro bass fishing’s biggest event.

Powell relishes the chance to fish in his first Classic, but his even-keeled personality won't let him get too worked up, now or in March.

“I'm excited,” he said. “But it's just like this tournament on Eufaula. You go out and do what you do.”

David Lowery, a Milledgeville, Ga., resident representing Berry's Tournament Trail, also grew up fishing Lake Eufaula. He finished second in the Bassmaster Classic Fish-Off with 18-9 over two days. Randy Tolbert, who paired with Gary Thompson to win the Team Championship on Thursday for the Alabama Bass Trail, placed third in the Fish-Off with 15-8.

Tolbert and Thompson caught a two-day total of 28-14 in the team event and claimed a $20,600 cash prize from Ranger/Mercury. A total of 179 tandems representing more than 60 B.A.S.S. team trails from across North America competed for a cash purse of $91,600.

The Eufaula-Barbour County Chamber of Commerce hosted the event.