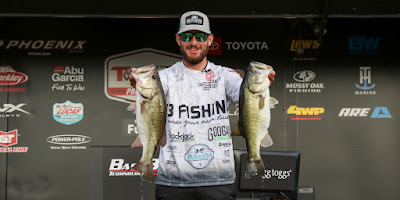 LEESBURG, Fla.– Perfect Florida weather headlined Day 2 of Bass Boat Technologies Stop 2 on the Harris Chain of Lakes Presented by Frogg Toggs and many pros took full advantage. Weighing 22 pounds, 5 ounces today,  Tackle Warehouse Pro Circuit Presented by Fuel Me rookie Christian Greico moved from 28th into the lead with an even 38 pounds. Behind him, Kerry Milner moved from third to second with a 36-3 total and Jason Reyes moved up from ninth to third with a 35-10 total.

Tomorrow, the Top 50 will duke it out for a chance to fish on the final day with zeroed weights for up to a $135,000 payday. With almost every lake in the chain producing now, and only about a 4-pound difference between 10th and 36th, it sure looks like Day 3 on Tuesday is going to be interesting from start to finish.

“It feels really good,” said Greico after taking the lead. “When I saw the schedule and saw the Harris Chain was on there, I knew that was probably going to be my best shot at winning one of these.

“It was a good day out there,” he said. “Yesterday I figured something out in the last two hours and ran that a little bit today. I started off a little bit slow, but as the water heated up it got pretty good. I had about 18 pounds, and then I ran some other stuff and caught a 5-pounder. It just seemed like every decision worked out for me.”

“I’m doing a little bit of a mix, fishing some offshore stuff, fishing some shallow stuff, definitely putting the flipping stick in my hand for a bit,” Greico said. “There are a lot of fish offshore, I can see them on the LiveScope, they just aren’t biting super well right now. I have to really grind out the spots to get them to bite.

“It took a little bit to get my limit, and my original limit was only 8 or 9 pounds,” Greico said. “In the afternoon I hit a bit of a flurry, put a few good fish in the boat. Then it slacked off again and I went shallow and put another good fish in the bag.”

Known for his prowess with a flipping stick, it’s not like Greico is out of his comfort zone offshore.

“I had some fish figured out shallow in pre-practice in Apopka, and that didn’t really pan out for me,” Greico said. “So, I went out offshore in Harris, started scanning around, and figured out there were some fish to be caught.”

Tacking on 13-6 to his Day 1 big bag, Milner edged up a spot and seems to be doing all the right things.

“I went to a spot not far from the ramp, fishing shell beds,” Milner said. “I caught a limit early, way sooner than yesterday.

“I didn’t want to throw it all out there yesterday, but most of that big sack came off one spot,” Milner said. “So, that’s where I started and got a limit this morning. Fishing the exact same way – I’m forcing myself to do that. There was a point where I thought ‘man, I need to do something else,’ and I’m fixing to rig up and I thought it’d work in the same spot, but I’ll be danged if I didn’t leave that tackle box in the truck. So that’ll be in the boat tomorrow and it might produce a big bite.”

Unlike Day 1, Milner never caught a big fish, just plenty of fish with some decent quality mixed in. The killer is that he broke off his one big chance.

“I think I had one big bite, and my fish were biting so finicky,” he said. “I’d feel them tap it and tick it, and then I’d let it sit there or maybe kick my bait a little bit. (The big one) took off in the other direction as I set the hook and there was no turning it. It broke my line.”

Pretty expert when it comes to dragging a Carolina rig offshore, Milner probably has enough cushion on 10th that he can make the final day with another decent bag. On the final day, the Arkansas angler is known to be dangerous – after all, he won the 2013 Phoenix Bass Fishing League All-American with 25-12 plucked from the tailrace of the Chickamauga dam.

Absolutely the steadiest pro in the top three, Reyes is fishing in the incredibly popular Banana Cove area of Harris, which has plenty of offshore grass and seemingly a zillion bass.

“Today I started a little bit down the way from where I started the first day, and caught a limit by 9:30,” Reyes said. “I was throwing a Senko pretty much all morning, and they were biting it pretty good.”

Then, Reyes hit a pretty big lull, and didn’t cull once between 9:30 in the morning and 2:30 in the afternoon.

“Finally, later in the day I switched to a ChatterBait and culled a couple times,” Reyes said. “That truly was a big difference. It gives me a one-two punch going forward. It gives me some more confidence throwing a winding bait.”

Banana Cove is loaded with bass, and there should be fewer anglers there on Day 3, but it certainly won’t be empty. Reyes thinks that surviving until the final day could open it up.

“It’s tight, everybody is working over the same water, and they go in spurts,” Reyes said. “It’s real key that you don’t lose anything, I think I caught six keepers on Day 1 and eight today, if I could ever catch 10 fish, or more, I think I could catch 20 pounds. We’re all catching the quality that could produce that, but we’re chopping them up.”