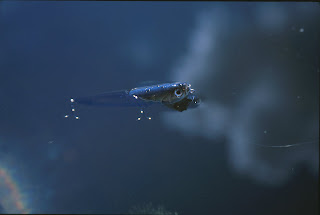 No other bait can excite the heart to levels of arrhythmia quite like a topwater. Strikes are visual, vicious, and exhilarating. Watching the hit then fighting off the desire of slamming the hook home can be total misery. But we wouldn’t want it any other way. Topwater fishing is not only thrilling; it’s a killer technique on giant bass. There are four main families of topwaters. Each one is entirely unique. Learning to use each bait to its potential and success is almost guaranteed.
With a long and colourful history dating back to the origins of bass fishing with artificials topwaters have never lost their luster. Recently, a revolution has occurred. Japanese companies like Lucky Craft, Mega Bass, Jackall and Lake Police, and now some American companies are producing plugs with incredibly ultra-realistic designs. Internal weight chambers, 3D imaging and top-of-the-line hooks have transformed topwaters to near perfection. These baits are easy to work and look incredible but come at a price. Do anglers need such high tech lures? May be not. But many tournament anglers stake their reputation and mortgage payments on them. It’s something to consider and they really do look so pretty.
Topwaters make great search lures. Straining the water for biters can be done quickly. The clearer the water, the further fish will hunt them down. Casts can be more random and still be effective. The real bonus of topwaters, especially big topwaters, is that big bass will snatch it regardless of how lazy their mood. Bigger, heavier baits are idea for working over large areas. They cast very well and can be retrieved quickly without becoming too erratic.
Open water is an untapped horizon for topwaters. Brozebacks routinely roaming open water for smelt, blueback herring or other prey. Pods of bass will cruise underwater landmarks. Shoals, contours around islands, points, and rocky shorelines are all prime locations to intercept them. Roaming bass can be a challenge. Spraying casts across endless water is taxing. Fortunately, once you encounter bass, they’ll usually react. Catching bass, especially smallmouths, on back to back casts can be common. Anglers who focus their attention towards the bank should keep an eye out for open water activity. Keeping a keen eye just off of key cover can pay off. Schools of bass will coral baitfish forcing then towards the surface as they feed. If you’re ready with a topwater plug the action can be fever pitched.
Keeping alert really paid off one July morning while fishing on a Grand River Conservation Authority managed reservoir. Bruno Bambara, a childhood friend, and I were crankbaiting the rocky bottom along a tear drop shaped island. All of a sudden, the surface began boiling. We knew that our luck had changed as we cast into the churning water. One cast, two casts, three casts and still no biters! We frantically cast through the baitfish with crankbaits over and over praying the frenzy wouldn’t disappear. Bruno switch to a popper and after a few jerks of the rod tip, his lure vanished. Forcing the fish to the boat, Bruno lipped a three-pound largemouth. Not a giant, but the lake we were on wasn’t known for producing largemouth. So a three pounder was a worthy prize. Slipping the fish back into the water, Bruno flung his lure back. Bang! Again a scrappy largemouth clamped down on his lure. The action was intense but dissolved as quickly as it appeared. Our final count was nine. The strangest thing was the bass were dining on a huge school of 4” to 5” bullheads. After the surfaced calmed, we discovered several wounded bullheads twitched inches below the surface crippled during the ordeal. 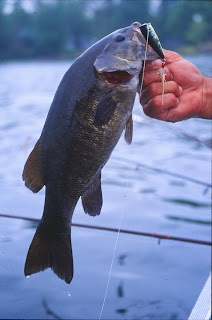 The most popular of all topwater plugs is a popper. Poppers or chuggers are versatile in cover and open water. With a minnow profile and large concaved mouth, poppers spit water and pop distinctly. Traditionally, poppers where meant for still evening with the bait gently worked next to lilies in a gentle plop, plop, plop fashion. This is fine, but poppers are much more versatile. David Chong a seasoned bass tournament angler and topwater nut from Thornhill loves hunting the mid-depths with poppers. He’s always done well with poppers and last year it helped him seal a victory on Stoney Lake. Stoney, a clear lake with thousands of rocky outcrops is nestled along the northern edge of the Kawarthas. Working both a Frenzy and Splash It popper he landed numerous four pound plus smallmouth all in five to eight feet (1.8 to 2.7m) of water.
PART 2 COMING SOON
Posted by IBASSIN.COM at 8:23 AM