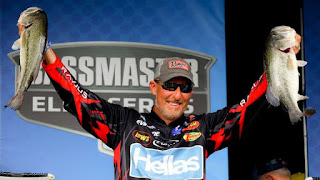 Wesley Strader caught a five-bass limit during Sunday’s semifinal round of the Berkley Bassmaster Elite at Kentucky Lake presented by Abu Garcia that weighed 22 pounds, 6 ounces. It was the biggest limit of the day — and it put the Spring City, Tenn., pro in position for his first-ever Elite Series victory with a three-day total of 59-9. Despite his strong effort on Day 3, Strader said the fishing has been anything but easy. “It’s a struggle to get bit,” Strader said. “But if you hang around, you can catch a few. I’m making it look a lot easier than it is. I only got eight keeper bites today. “It’s really weird. One day you’ll get a lot of bites, and then one day you won’t get many. Every time I caught one today, it’d be on the very back hook, which tells me they’re not eating. They’re just slapping at it, but luckily my Trokar hooks kept them buttoned up.” Strader took advantage of the daybreak shad spawn, but that window was smaller Sunday than it had been earlier in the event. The change was due to cooler, sunnier conditions. “I think the shad spawn was shorter today because it got cold last night,” Strader said. “The water cooled off. The optimum water temperature for the shad to spawn at daybreak is somewhere close to 70, and this morning it was 64 to 65. That knocked it back a little bit, plus the bright skies didn’t help. We got about 30 minutes and it quit.”
Strader caught his first three keepers on a handmade BH Custom Lures balsa crankbait. After that, his day amounted to a junk-fishing exercise that included topwater baits and flipping. Strader had a limit by late morning and made a key cull toward the end of his day. “I’m just putting my trolling motor down and fishing and whatever I come to, I’m picking the right bait for the conditions,” he said. Later in the day, Strader figured out a specific scenario that he feels he can use on Day 4. He wouldn’t divulge many details, but he’s fairly confident he’ll have it to himself. “I’m kind of fishing things that nobody else is fishing,” he said. “I’m doing something that probably nobody else in the tournament is doing. It’s a very limited scenario, but you can run it over and over and over and catch more fish. “There are times that they don’t bite. You might go by a bush and flip it 10 times and not get a bite, but come back an hour later and catch a 4-pounder. It’s just a timing thing.” Looking ahead to Championship Monday, Strader said the morning bite will determine his fortune. “It all depends on what those shad do,” he said. “If those shad come up and spawn really good, it’ll be decent. If not, it will just be a grind.” Just one space below Strader is California superstar Skeet Reese, the Day 2 leader who now trails by less than a pound with 58-12. Reese managed only four keepers for 13-7 Sunday. After plucking only two keepers from the shad spawn with a squarebill crankbait, Reese switched to flipping. On Bassmaster LIVE, Reese commented that he was in survival mode today — concerning himself more with making the Top 12 cut than weighing another big sack like his previous weights of 23-11 and 21-10. “I knew the shad spawn bite would be shorter for me today,” he said “I thought the fish might stay up a little longer in the dirtier water I was fishing, but they didn’t. I tried running my key stuff as fast as I could and as early as I could to try and capitalize on it, but I could only get two good ones. “I couldn’t get bit again, so I just forced myself to get up there and start flipping bushes, which I hadn’t done the last two days. I got two doing it. I thought if I kept doing it, I could get five.” Reese caught his fish on a Berkley tube rigged on a Trokar kahle-style tube hook. Jason Christie of Park Hill, Okla., lost a 6-pounder right at the boat Sunday, but he still caught a limit that weighed 16-9 and moved up form fourth place to third with 56-5. He spent his day pitching shallow cover. “The bite was a lot tougher; I only had seven bites today,” he said. “I lost that big one, then I caught a big one and then I went hours without a bite.” Boyd Duckett of Guntersville, Ala., is in fourth with 56-1, and Kelly Jaye of Dadeville, Ala., is fifth with 54-15. The tournament will conclude Monday with takeoff scheduled for 6 a.m. CT from Paris Landing State Park and the final weigh-in back at the park at 3:15 p.m.
Posted by IBASSIN.COM at 1:30 AM