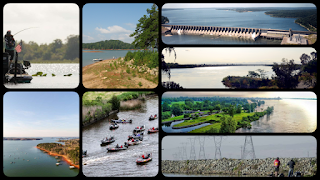 Since the Bassmaster Elite Series made a two-week trip to the West Coast back in 2015, fans of the sport have been clamoring for the world’s premier bass fishing circuit to return to that region.
Now, they’re about to get their wish.
B.A.S.S. officials unveiled an action-packed 2019 Elite Series schedule today that includes a Western swing in mid-June with back-to-back trips to Sacramento, Calif., for an event on the California Delta and to Tri-Cities, Wash., for a tournament on the Columbia River.
The Columbia River will be one of three first-time destinations for the Elite Series, along with Lake Lanier in Georgia and Lake Hartwell in South Carolina.
“We couldn’t be happier with the schedule we’ve put together for 2019,” said B.A.S.S. CEO Bruce Akin. “This lineup of events will be exciting and challenging for our anglers — and for fans of the sport, it literally has something to offer from coast to coast.”
The slate will have a familiar kickoff venue, as the Elite Series returns Feb. 7-10 to the St. Johns River in Palatka, Fla. — the site of the 2016 season opener where Missouri superstar Rick Clunn recorded one of the more memorable victories in B.A.S.S. history. Just four months shy of his 70th birthday, Clunn brought 31 pounds, 7 ounces of bass to the scales during the semifinal round and eventually became the oldest angler to win an Elite Series event with a four-day total of 81-15.
The St. Johns River has been a regular destination for B.A.S.S., with the organization visiting 20 times for major events since 1973.
“The Bassmaster Elite Series tournament coming back to Palatka and Putnam County is a tremendous win!” said Dana Cameron Jones, president of the Putnam County Chamber of Commerce, which will host the event. “Putnam County’s natural beauty provides a great venue for bass fishing, and B.A.S.S. provides business for our local community! It was an easy decision to host B.A.S.S. — the economic impact into our local economy by an Elite Series event easily equates to over $3 million dollars, and the media value well over $500,000 is a huge value-add.”
From Florida, the schedule will shift to Lake Lanier in Gwinnett, Ga., Feb. 14-17 — a venue that has hosted eight major B.A.S.S. tournaments since 1983, but never an Elite Series event. The 37,000-acre fishery on the Chattahoochee River has long been known for producing giant spotted bass.
“We are extremely excited to host the Bassmaster Elite Series in 2019,” said Stan Hall, executive director of the Gwinnett Sports Commission. “This is a wonderful opportunity, partnering with Bassmaster, as well as our friends at the Gainesville Convention & Visitors Bureau, and Coolray Field, to present a premier freshwater fishing competition. An event of this caliber is always a powerful economic driver in the community, but first and foremost, we're thrilled to have a platform to share the best in fishing and all our area has to offer to folks both locally and beyond who truly love this sport.”