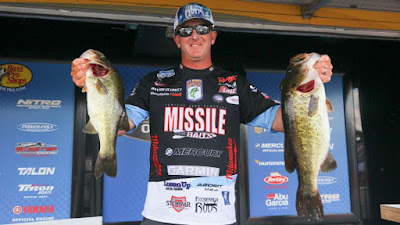 Bryan Schmitt knows his way around tidal fisheries, but he welcomed a stroke of good fortune that delivered a five-bass limit of 20 pounds, 4 ounces giving him the Day 1 lead of the Basspro.com Bassmaster Eastern Open on the James River.
Schmitt’s catch included a 6-10 largemouth that leads the Phoenix Boats Big Bass competition.
“I got one of those crazy, like pure-luck bites today,” the Maryland pro said. “This place has giants, but they’re not biting. I got one of those today and that made all the difference.”
With much of the field running to the Chickahominy River (a fertile James River tributary), Schmitt spent his day in the James. He fished a lot of water but targeted the same habitat scenario.
“I’m fishing both grass and wood,” Schmitt said. “Clean water was the key. I knew this scenario could happen; I’ve seen it here, but when does it ever really work out? I got that big bite early and I thought, ‘This might be a good day.’”

Understandably tight on details, Schmitt said he caught his fish on a selection of Missile Baits. Notably, most anglers found their better action during the latter half of the day, which brought outgoing water.
Schmitt, however, did most of his damage early.
“The morning was better by far,” he said. “I prefer low tide on this river, but I got fortunate on the higher water today.
“I fished clean today and caught 10 fish.”
Tim Ward of Sylacauga, Ala., is in second place with 17-15. He started his day by sacking up a solid limit in the Chickahominy, upgraded in a smaller creek and then secured his final culls in the James.
Ward’s biggest fish — a 4 1/2-pounder — surprised him in the Chickahominy.
“I was hoping there were some big fish there, but I had no clue that caliber of fish was there,” he said. “I had been catching a lot of 2-pound fish in practice and I caught one 5-pounder in another area and that keyed me in on what I needed to do.
“I started implementing that everywhere I went. I kept one rod in my hand all day and that produced all my weight.”
Denny Fiedler of Minnetonka, Minn., is in third place with 16-10. Relying on a mix of reaction and slow baits, he caught his better fish in the afternoon.
“It was low tide for us when they really started to bite,” Fiedler said. “It was the bottom of that outgoing tide and the very start of the incoming. There were two basic patterns: During high water, we were fishing pads —soft cover. When the tide was going out, it was all hard cover.”
Scott Stephenson III leads the co-angler division with 12-0. Fishing a mix of grass and wood, he caught his fish on what he termed “slower” presentations.
Stephenson holds the Phoenix Boats Big Bass lead among co-anglers with a 7-8 — the largest fish of Day 1. His kicker bit midday and Stephenson surmised that the deeper spot he was fishing likely contributed to his big opportunity.
Friday’s takeoff is scheduled for 6 a.m. ET at Osborne Park & Boat Landing. The weigh-in will be held at the park at 2 p.m.