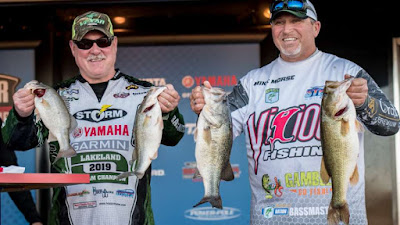 Kris Lockard and Michael Morse said they knew next to nothing about Lake Hartwell heading into the Bassmaster Team Championship, but they made it look like their local favorite spot on Wednesday.
Lockard and Morse, who compete on the Lakeland (Fla.) Bassmaster Team Trail, caught a five-bass limit that weighed 17 pounds, 15 ounces to take the lead on Day 1 of the final event of the 2019 season.
The Florida anglers said they weren’t sure which strategy to employ on Hartwell, so they went “junk fishing” on Wednesday. Their limit (four largemouth and one spotted bass) was heavy enough for a 15-ounce lead over Adam Smith and Jayme Rampey, who live only minutes from Lake Hartwell and know it as well as any tandem in the tournament.
In all, 165 duos from 30 different states and two foreign countries are competing for a total cash purse of $87,200 in the two-day Team Championship portion of this event. The duo with the heaviest two-day total will earn a $20,000 Nitro/Mercury cash prize.
Lockard and Morse put themselves in good position to claim that cash. Their catches were spread throughout the day and covered ample water to entice their bites. That was the case for many teams, who scooted across Hartwell Wednesday, when skies were sunny and temperatures hovered near 50 degrees all day.
“We got lucky fishing this cold and deep water,” Morse said. “We’re from Florida, and there are no buggy whips or lily pads for us to flip here like we have back home. But we found some backwater spots that looked decent and were holding a little bait. We were able to get five good bites.”
The biggest of those was a 5-9 largemouth Morse caught while he was trying to help Lockard free his jig from a Hartwell rockpile.

“(Lockard) was hung up on some rocks, and I was spinning the boat around so he could get loose,” Morse said. “I threw a crankbait down a rock line. There was no reason for that fish to be there. I thought it was a striper. He was digging and shaking hard.”
Lockard, 53, is an operations manager for a fabrication machine shop, and Morse, 45, is a saltwater fishing guide. They’ve competed together in team-trail events for three years, and they qualified for last year’s championship on Florida’s Harris Chain of Lakes. They know that fishery very well, but they finished 101st of 196 tandems in the tournament.
The irony, faring much better so far on the unfamiliar water of Lake Hartwell, is not lost on either angler.
“Too much history,” Lockard said. “We know (the Harris Chain) too well.”
“We’re just going fishing here,” Morse said. “Not knowing much was OK today.”
Smith and Rampey, who compete on the Palmetto Boat Center Team Trail, caught a 17-0 limit and had the heaviest bass of the day (a 5-14 Rampey hooked early Wednesday morning.) They won a $500 cash prize for that catch, and another $500 big bass award will be presented to the team with the heaviest bass on Thursday.
Rampey said he’s not sure how Hartwell will fish on Day 2 of the Championship, but he’s hoping for more quality bites like Wednesday’s big bass.
“That deep bite (for the 5-14) was really good, but (overall) it wasn’t very good today,” he said. “Hopefully that changes up tomorrow. That’s what we’re hoping for.”
Chris Noffsinger and Micheal Ebach of the West Michigan Bassmasters are in third place with 15-4.
The Top 3 teams after Thursday’s weigh-in will have their weights zeroed and those six anglers will fish individually in the Classic Fish-Off on Friday and Saturday. The angler with the heaviest two-day total in the fish-off will claim the 53rd and final spot in the 2020 Academy Sports + Outdoors Bassmaster Classic presented by Huk.
The historic 50th staging of the Bassmaster Classic will be held March 6-8 on Lake Guntersville in Alabama. Weigh-ins will take place daily at the Birmingham-Jefferson Convention Complex in downtown Birmingham.
Daily take-offs for the Bassmaster Team Championship and ensuing Classic Fish-Off are scheduled for 7:15 a.m. ET from Green Pond Landing in Anderson. Weigh-ins will take place beginning at 3:15 p.m. at the same location.
Posted by IBASSIN.COM at 3:00 AM