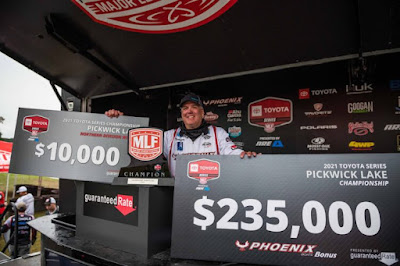 COUNCE, Tenn. – Fishing below the Wilson Dam, Brent Crow of Hartselle, Alabama, came out swinging on the final day of the Toyota Series Championship Presented by Guaranteed Rate at Pickwick Lake. Tallying 23 pounds, 1 ounce before 9 a.m., Crow moved from 10th to first with a 52-2 total. For the win, Crow earned $247,500 with the MLF Phoenix Bonus and other contingency money for a total payout of nearly a quarter-million dollars.

But the win isn’t something he just magically stumbled upon, it’s almost as if it was destiny. Crow is a guide on Pickwick, so he had this event circled on his calendar since it was announced. The only issue for him, however, was the stars couldn’t align if he wasn’t qualified for the event.

“I’m not trying to make a living as a professional,” Crow says. “I make a living fishing and I like to fish and if the schedule suits me I fish. When the championship was announced it was going to be here in the fall I thought, ‘Oh, I got to make that.’ I had some conflicts, so I couldn’t fish some of the divisions and I didn’t like the Southern Division schedule. But I’ve been to Champlain before and I love St. Clair, so I love the north. Then I saw 1000 Islands and heard how good it was so I thought I’d go up there.

“It worked out perfect because it’s our slow time down here. July, August there’s not much guiding, or the fishing’s not that good here, so I went up north and was able to make it. I put more effort into making this championship than I have any of them. It worked out.”

While the Champlain event didn’t go as planned, Crow made a Top 10 at the St. Lawrence and survived the Potomac with an 18th-place showing to easily qualify for the Championship. With his ticket punched, all Crow had to do was sit back and wait for practice to start.

So, Crow checked some grass and a few spotted bass holes he’s found from his years of guiding and met with some success. Knowing he had a plan B, Crow was set for the tournament, still with his hopes of the tailrace bite carrying him through.

“I ran up there the first two days and they weren’t biting at all,” Crow says. “They were running a little too much water for me to do what I wanted to do, so I basically struggled and squeaked in catching spotted bass.”

Weighing seven spots and three smallmouths over the first two days, Crow ran little current breaks between the Wilson Dam and the Natchez Trace Bridge. A ¼-ounce shaky head with a Berkley PowerBait MaxScent Hit Worm Magnum thrown on 15-pound Berkley X5 braid with a 15-pound Berkley Trilene 100% Fluorocarbon leader enticed quality spotted bass over the first two days. An Abu Garcia Fantasista Premier rod matched with a Abu Garcia Zenon reel helped haul them to the boat. He also weighed a few fish on ¾- or 1-ounce homemade jig, which his buddy, Rex Chambers made. A Berkley PowerBait MaxScent Chigger Craw was the deal for a trailer.

Fate came back into focus on Day 2 when Crow threw a wakebait to catch a 4-pound smallmouth to bring his Friday total up to 15-10. That bag would help him win the tiebreaker with Randy Blaukat by having the heavier single-day catch and send Crow into Championship Saturday for one more day on his home lake.

“On Day 2 I figured I’d start at the dam since it’s usually an early bite,” says Crow. “I got there and I caught like a 15-incher and jumped off a 3 ½. Then I went down and caught several spotted bass and then stopped on a rock row and caught a big smallmouth. That’s the one that saved me. I actually caught a 4-pounder in the grass on my way back on the first day too. Any of those things don’t happen then I’m not here. I had to get fortunate to get here.”

Another day on Pickwick meant another chance at the tailrace finally firing. With too much current being run all week, Crow thought he might get enough of a window on the final morning to make things interesting.

“It hasn’t rained here in three weeks and they’ve been running so much water,” Crow says of the TVA. “I remember last night I was thinking that if I could get an hour of no current, I know what I can catch. I’ve never looked at that app and been so happy as I was this morning when I looked and saw 35,000 (cubic feet per second).”

Crow got up the tailrace as fast as he could and quickly realized that it was finally on.

“Then I heard the horn and they started running more water. Thank goodness even after they turned it up it took a while for it to affect our baits.”

Though more current was running, the damage was already done for Crow. What might be the best hour of fishing he’s ever had on Pickwick came solely at the hand of a wakebait thrown on 15-pound Berkley Trilene Big Game monofilament.

The reason the fish finally “turned on” was because the conditions were finally right.

“The less current they run, the lower the water is,” Crow explains. “You’re not going to catch them on a topwater in 70,000 CFS in 8 feet of water. But at 20,000 to 30,000 it’s 2 or 3 foot deep and you can’t really throw much more than a topwater. A topwater is the most efficient way to fish it. I couldn’t throw a topwater the first two days because they were running too much water. But the fall bite in the tailrace is erratic and sporadic.

“This was the second tournament I ever got to fish up there with a topwater. I’ve had guide trips where we do it, but I don’t know that it’s ever been this good and getting that many bites that quickly.”

Winning a tournament of this magnitude on your home lake with a phenomenal day of fishing like he did is certainly something to remember. And maybe a bit of fate. But the win means more to Crow than just a big check.

“My tournament partner, Rex, died on the way home from a tournament like three years ago from a heart attack,” says Crow. “We had a great time fishing and traveling around. I know he’s up there smiling big time. He’s happy.

“A quarter-million dollars is nothing to sneeze at. But it’s not all about money. All fishermen have pride, or I don’t know what it is, but everybody likes to be recognized from your buddies more than anything. I’ve had texts all day and most of them are from fishermen that are better than I am. It’s cool that everybody is happy for me and I’m happy for the support. I’m not worried about where it puts me at any level, I’m just thankful to win. It’s just awesome for it to work out the way it did. It’s just unreal.”