Glioblastoma claims one of the best in professional angling 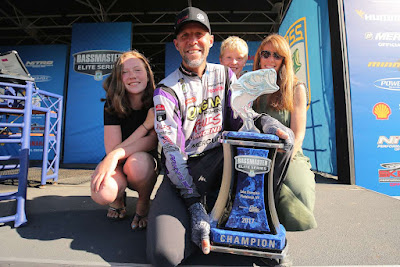 Aaron Martens, a fun loving, innovative angler who embraced all aspects of being a professional angler passes surrounded by family.

After blacking out while fishing in Alabama in 2020, tests relieved brain tumors. Aaron, one of the physically strongest athletes on tour, focused on recovery and kept on fishing. His tenacity was fierce as he continued to compete even after surgeries and treatments. During his last MLF event, Aaron’s vision wasn’t strong, so he had a friend pilot his boat so he could still complete.  Cancer became too overpowering and Aaron passed after a 19-month battle with Glioblastoma.

Lesley, his wife wrote in a Facebook post, “We are heartbroken beyond words. I can’t imagine life without him but we take solace in knowing that he’s walked into glory - the only glory that truly matters. Thank you to everyone that supported us during the past 19 months through texts, posts, phone calls, visits, and fundraisers. Your kindness, prayers, and love encouraged us every day and Aaron and I wholeheartedly felt your love.”

Groomed at a young age, Aaron spent years along side his mother competing in California and neighbouring western States. During the 1990s, he was part of the second wave of western anglers who descended upon BASS and dominated.

Considered one of the most successful professional bass anglers of all time, Aaron Martens captured three Bassmaster Elite Series Angler of the Year awards (2005, 2013, 2015), 11 wins, more than 80 Top 10s and over $3.6 million in career earnings. Martens last win was at the 2019 Bass Pro Tour Stage Six on Table Rock Lake in Branson, Missouri. Aaron has also won the US WON Open a record three times and scores of regional and state tournaments.

Aaron popularized obscure techniques like Scrounger jigs, underspins, shaky heads but he’s best known for drop shotting. Bassmaster Magazine once wrote an article titled, Aaron Martens Drop Shots Better Than You! They were correct. He was the best.

He is survived by his wife Lesley, his two chiildren and his mother Carol.

Email ThisBlogThis!Share to TwitterShare to FacebookShare to Pinterest
Labels: Aaron Martens Passes at 49