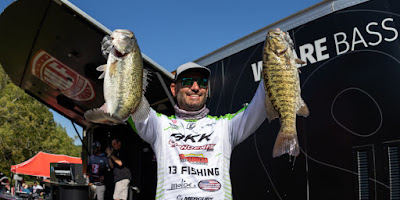 COUNCE, Tenn. – When you’re in a good groove, you can seemingly do nothing wrong. Well, Jacopo Gallelli is definitely in a groove at Lithium Pros Stop 3 on Pickwick Lake Presented by Covercraft.

The Day 1 leader of the Tackle Warehouse Pro Circuit Presented by Fuel Me event admitted today that he felt he had burned up his best spots and had almost resigned himself to just trying to coast to a check.

Turns out, he was wrong on both fronts.

While a number of top pros from Day 1 struggled mightily on Day 2, the Italian pro continued to follow his gut and brought in the sixth-largest bag of the day, 16 pounds, 15 ounces, to extend his lead with 39-15 total for two days.

“Honestly, I was hoping to stay top 20 today,” Gallelli said. “So, to still be leading is as awesome as can be. And I feel I deserve to be because I had very sharp intuition today. Three of my fish were just intuition. Things that make you feel like you know what you’re doing.”

Part of the reason for that feeling is that he feels he finally is doing something he does best – finesse.

In all his events he’s fished since coming to the United States, including the Pro Circuit event he won last year on the Potomac River, Gallelli says he’s never been able to find a way to fish like he does back in Italy. Yet, this event, he finally found a pattern that’s just like what he does back home.

Now it’s just a matter of if that pattern will hold up, or even if he wants it to for Saturday, at least.

Fortunately, with him holding an 8-pound-plus lead over 10th place and the weights zeroing on the final day, Gallelli says he will actually try and lose the lead tomorrow in order to spend more time practicing for another solid pattern.

“Tomorrow when I get the limit, I’ll decide to lose the lead,” Gallelli said. “It’s not worth anything. So, I probably decide to lose some position for Day 4, but I will invest time practicing. Because I practiced a little bit today but didn’t find anything that felt right.

“You’ll need 20 pounds to win this thing on Day 4, and tomorrow I’m going to try and find it to at least give myself a chance.”

Looking at the color of John Hunter’s bags the first two days, which have been worth 38-7 total, one might assume he’s making a long run to the Wilson Dam. That’s where you go to catch big bags of mostly smallmouth.

That’s not the case for Hunter, though.

No, instead, he’s got a sneaky shallow bar that has a shad spawn going on it until about 9:30 a.m. Yesterday, he was able to get on it first thing and crack the majority of his big bag. Today, though, another competitor was on it.

“It happens,” Hunter said. “I pulled up and asked if I could come up in there. He said yeah, but it’s kind of a one-cast deal to get them to bite, and he was sitting right on top of the cast. So it had them in a weird mood.”

That mood meant he only caught two before abandoning it to try and run similar places. Amongst the running, though, he looked back over a bit later to see that special spot empty.

“I figured I needed to give it one more try even though it was later in the morning, and I got them fired up,” Hunter said. “I guess it’d given them a chance to set back up. It was on for about 30 minutes, and I left it with close to 15 pounds.”

Solid bag in hand, Hunter then was able to run his secondary pattern the rest of the day, which culled him up those last few crucial pounds, especially since tomorrow might make getting on his spot tough again thanks to a massive high school tournament taking place.

“It is what it is,” Hunter said. “Hopefully, I can get on it, and if not, I have my other pattern.

“I’ll look at the weights and see what I need to try to catch to just make it to Sunday. So I’m not too concerned.”

Nelson Adapts on the Fly

He may hail from the north, but Ron Nelson is very at home fishing around the spawn in the south, which he proved again with two bags in the mid-teens for a 34-11 total after Day 2. Part of that is because he’s one heck of a sight fisherman, but the other is his knack for being so adaptable during a time of transition.

Today, he showed that off.

While he started his morning with a quick limit cranking offshore, it wasn’t much to write home about size-wise. Fortunately, after bouncing around for a bit, he came back to his main area and caught a 5-pounder that settled him down and helped him know he was fishing tomorrow.

“After that big one, all the pressure was off,” Nelson said. “So, from there I wasted a lot of time today looking at other stuff.”

What he saw, though, was quite interesting, as he admits he started seeing some fish moving up on beds that he’s saving for tomorrow and hopefully Sunday.

“There were some ones that would help me, but I didn’t want to waste them in case something happens tomorrow,” Nelson said. “I have caught some off beds yesterday and today, but the majority are not.

“I’ll admit, though, this week has really puzzled me. The water is in the low 60s with stable weather. The fish had to have spawned months ago because the banks should just be crawling with fish. So, we’ll see what happens tomorrow, because I’d like to see more on beds.”