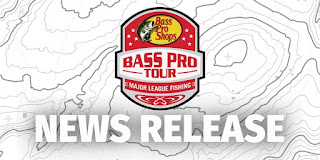 TULSA, Okla. – Major League Fishing, the world’s largest tournament-fishing organization, announced today a scoring change for the 2023 Bass Pro Tour. The extremely popular catch, weigh, immediate-release format will remain, however scoring will change from every scorable fish counts to scoring each angler’s five heaviest bass per day. The “every fish counts” format will remain for both the General Tire Heavy Hitters all-star event and the General Tire Team Series.

“Major League Fishing and the Bass Pro Tour was built to deliver a new level of excitement, to grow the sport and expand our fanbase,” said Kathy Fennel, Executive Vice President & General Manager of MLF. “Our fans love the drama and excitement that the Bass Pro Tour every fish counts format provides, but they also want to see the best anglers in the world fish for their best five, like those fans do every weekend. Major League Fishing is so fortunate to have the logistical capabilities, and the flexibility of our anglers, to be able offer both scoring formats in our tournaments – the best of both worlds.

“This scoring change on the Bass Pro Tour next year is not a departure from our brand,” Fennel continued. “We are simply looking to make improvements requested by our fans and pros alike while remaining true to the two most important tenets of the Bass Pro Tour – our SCORETRACKER® live-scoring leaderboard, and our conservation-focused catch, weigh, immediately-release format.”

After connecting with and hearing the same feedback from numerous different fans throughout the year, a group of Bass Pro Tour anglers approached the league with the suggestion to change the scoring format from every fish counts to the five heaviest bass. After discussions with multiple stakeholders, BPT anglers were polled on the possible scoring change. By an overwhelming majority, the anglers voted with their fans for the change.

“I’m really excited about this change, and I think it will really resonate with our hardcore tournament audience,” said Berkley pro Jordan Lee, the 2020 Bally Bet Angler of the Year. “As exciting as ‘every fish counts’ is, the five-fish scoring just really hits home with our fans. The sport of tournament bass fishing is used to competing in that scoring format, and I believe some of the hardcore tournament anglers that may not have followed us as much as they used to will like this scoring change. I think Major League Fishing did a great job in handling this – this is a piece of the puzzle that will make it the best viewership experience for the fans as well.”

“The majority of tournament anglers fish under the five-fish scoring format, so this shift will make it more relatable to them,” added Kevin VanDam, who has more than $7.1 million in career earnings. “This also forces us to totally focus on big fish. It’ll vary from body of water to body of water, but this (five-fish) format requires a different mentality. It’s what I’ve done my whole career up until we started the Bass Pro Tour, so I don’t think this will be a big transition for me, at all.”

The fifth season of the Bass Pro Tour, professional bass fishing’s most prestigious circuit, will showcase the top 80 bass anglers in the world competing in seven regular-season tournaments for millions of dollars – including $100,000 winner payouts at each event, valuable points in the Bally Bet Angler of the Year race, and to qualify for REDCREST V, the Bass Pro Tour championship, and the General Tire Heavy Hitters all-star event. The 2023 season kicks off with Stage One on the Kissimmee Chain, in Kissimmee, Florida, Feb. 13-18.