By Ken Duke
Bass Press Release
GREEN BAY, Wis. — The Bassmaster Elite Series event that was billed for months as the "Mystery Lake" tournament is still something of a mystery to many of the best bass anglers in the world. The 2006 Toyota Tundra Bassmaster Angler of the Year, Aaron Martens, leads the way at the Green Bay Challenge with a five-bass limit of smallmouth that weighed 20 pounds. His closest competition, Dean Rojas, is just two ounces back, but a third of the field is knotted between 11 and 14 pounds.
“Everyone’s basically fishing in the same area,” Martens said, describing a 3 or 4 mile stretch of Lake Michigan on the west side of the lake, not far from Sand Bay. “I’m concerned that all the fishing pressure might affect the bite and make things tough tomorrow.”
David Walker, currently sixth with 17-13, estimated that there were as many 80 boats in a 3-mile section of the lake. “In places, the boats are just 50 feet apart.”
Though the anglers are customarily closed-mouthed in the early stages of a tournament, several commented that many of the bass being caught are bedding smallmouth between 5 and 10-feet deep. Soft plastic baits fished on jigheads and drop


shots are doing most of the work, though jerkbaits and spinnerbaits are also accounting for some bass. 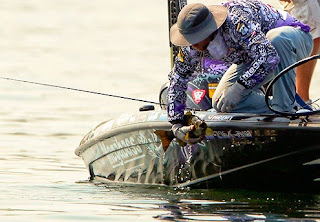 Apart from concerns about the action holding up under such intense fishing pressure, there are concerns about the weather. A change in wind direction on a massive water body like Lake Michigan can turn a pleasant boat ride into an unpleasant journey and a challenging ride into one you just can’t risk. With conflicting and frequently changing weather reports, it’ll be a game-time decision for each angler as to whether or not he can get back to his fish on Friday.
Japan’s Morizo Shimizu had the Carhartt big bass of the day, a 5-pound smallmouth. Unfortunately for the pro, it was one of just three keeper bass he scored today. His total catch weighed 12-12 and put him in 47th place.
In the Angler of the Year race, pre-tournament leader Brent Chapman weighed in 13-14 and ended the day in 33rd place. Todd Faircloth sacked a big limit weighing 18-3 and passed Chapman in the AOY race. He now leads with 572 points to Chapman’s 560.
First prize in the Green Bay Challenge is $100,000 and a berth in the 2013 Bassmaster Classic. The pros also are fighting for points to earn a qualification for the 2013 Classic. Those near the top of the points standings are in contention for a postseason entry and the 2012 Toyota Tundra Bassmaster Angler of the Year title.
The Challenge will continue through Sunday at Metro Boat Launch in Green Bay. Takeoff is set for 6:15 a.m., and weigh-ins will begin at 3:15 p.m. The Bassmaster Elite Series Family Festival will open at noon on Saturday and Sunday.
All Bassmaster fan activities are free and open to the public.
Bassmaster.com will provide extensive daily coverage, including daily streaming of the weigh-ins as they happen, real-time leaderboards, photo galleries, results and standings. Saturday and Sunday, the Bassmaster Elite Series War Room will present updates from BASSTrakk, a catch reporting system relayed from the water, plus in-depth interviews and analysis.Hooked Up! segments will be presented Saturday and Sunday. Access is free to all Bassmaster.com pages and features.
Posted by IBASSIN.COM at 9:38 PM