29.Jun.2012 by By David A. Brown
FLW Press Release
PLATTSBURGH, N.Y. – The calm, cooperative Lake Champlain that treated anglers to downright fun fishing on day one morphed into angry, wind-whipped waters on day two. Nevertheless, day-one leader David Dudley hunkered down, made some key decisions and retained his top spot at the FLW Tour Major event.
The Castrol GTX pro from Lynchburg, Va. returned to the same general area that, a day earlier, produced the event's heaviest sack – 24 pounds – and found the fish a little less aggressive. Today, he caught a limit that went 18-15, pushed his total to 42-15 and expanded his lead to 3-13. When it came to location and specific baits, Dudley held his cards low, but he was forthcoming about how his day required careful attention to stealth and a strong mental effort.
"Wind always makes things tougher just because of boat control and casting ability, but does the wind make them stop biting? I don't know," he said. "With (windy conditions) you make a lot of noise like the trolling motor (coming out of the water in the waves). Those bass can hear you from a long distance away.
"With the water so clear, it doesn't help things, but wind helps a lot of things in fishing. There are a lot of different factors and I can't weigh one heavier than the other."
On the mental game, Dudley noted that changes in weather like today's addition of 20-mph winds will test an angler's ability to interpret the cause-and-effect riddle and take the appropriate action.
"You have to do the best you can do and manage the best you can manage," he said. "That's what separates a lot of anglers from other anglers – how you handle wind, how you handle rain, how you handle decisions on the water. You have to be able to do that."


With his catches spread throughout the day, Dudley said he had to maintain his focus and pick up a keeper whenever he could. "I fished the same spot, but they weren't there as good and I had to move to another area and caught them pretty well there. It was a little different style of fishing when I had to go to a different area.
"The key today was moving to that new area. If I had stayed where I was, I wouldn't have had the bag I had. That's the key – having a backup. You have to have something as a backup. Typically, it's hard to win a 4-day tournament on one hole."
Dudley was clearly guarded in his explanations, but he said that some of the same baits that produced on day one, also delivered today, along with a couple of new additions.
"I'm throwing moving baits and slower baits," he said. "There's not one dominant bait. My whole deck has a ton of baits on it and I'm just going with whatever I think will produce."
Thompson breaks 20 for second 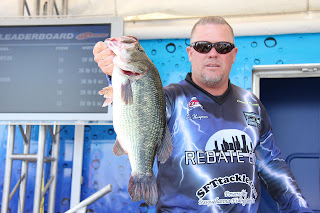 Making a big move up from 15th place on day one, Joseph Thompson, of Landenberg, Penn. improved to second place (39-2) on the strength of a 20-pound, 9-ounce limit – the second-heaviest bag of day two (behind ninth-place pro Roland Martin's 20-10). Returning to Ticonderoga, Thompson fished the same basic grassy habitat as the many others fishing around him.
"I think the only thing I'm doing differently than everybody else is that I'm sitting way off the edge of the grass and catching them a little out in front of the grass and a little deeper," he said. "Also, I'm presenting them with what I think is a sizeable bait."
Thompson said he positioned his boat in about six feet of water and cast into about three and a half. He caught his fish on a white swim jig with a large swimming trailer. Fishing Ti, he said, was a decision that he dialed in during practice.
"I actually only practiced down there one day because it's such a long run," he said. "I tried for two days to find a reason to not go down there, but I'm glad I didn't find one. I caught a lot of fish. I was culling 15 pounds at a time."
Third-place Powroznik gets smallie surprise
After tying for second on day one, Jacob Powroznik, of Prince George, Va. returned to Ticonderoga today, but the windy conditions left him with less productivity than his day-one bag of 20-12. Today, he caught a limit that weighed 18-1 and slipped a notch to third with a 38-13 total. 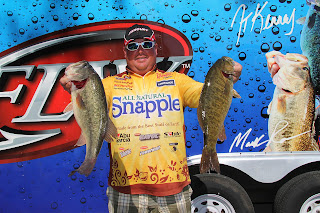 "This morning was really good and then this afternoon it got windy and it muddied things up a little bit," Powroznik said. "I don't think the muddy water hurts it; I just think it's the wind blowing so hard you can't fish properly. But tomorrow's supposed to lay down a little bit and it should be a good time."
Powroznik's catch included four largemouth and one plump smallie. The latter, he caught quite serendipitously.
"Yesterday, I pulled into a pocket and I saw four or five big smallmouth swimming around so I pulled back in there today and there was like 25," he said. "I threw in there and ended up catching a 4-pounder and when I reeled that one in, 20 big ones were with him."
Powroznik caught his green fish on a Berkley Iaconelli Flipping Tube and a homemade chatterbait. The lone brown bass ate a wacky-rigged Berkley Heavyweight Worm.
Nick rises to fourth
Blake Nick, of Adger, Ala., added 17-3 to his day-one score of 19-10 and improved from sixth place to fourth with 36-13. He, too, fished down in Ti. Today, Nick caught his fish on a mix of moving baits and soft plastics.
Today's wind, he said, seemed to bother fishermen more than fish. "The problem is that I'm fishing offshore grass and with that wind blowing, it's so hard to (target your casts). Your casts have to be so precise. The fish are still biting, it's just harder to present the bait and get it in there to get the bite."
Topwaters lift Shuffield to fifth
Spencer Shuffield, of Bismarck, Ark., started day two tied for 10th place with 19-0, but after sacking up 17-13 today, he gained five spots to place fifth with 36-13. Fishing a shallow bay in the lake's upper end, Shuffield targeted milfoil beds in about two feet of water. He caught all of his fish on a shad colored Zara Spook.
"It was great all day," he said. "It might have been a little slower first thing this morning, but it got better as the day went on. I caught probably 75-80 keepers today. I could have caught a whole lot more – I actually shook off a bunch of 2 ½- to 3-pounders that I knew wouldn't help me.
"I could have had a bigger sack yesterday and a bigger sack today, but I'm trying to pace myself. I just wanted to be in the top (field) the last two days and then really go at it. I won't have any problem catching this same weight the next two days."
Best of the rest
Rounding out the top-10 pro leaders at the FLW Tour Major event on Lake Champlain:

6th: George Cochran, of Hot Springs, Ark., 36-9
7th: Koby Kreiger, of Okeechobee, Fla., 36-8
8th: Cody Bird, of Granbury, Texas, 36-5
9th: Roland Martin, of Naples, Fla., 35-15
10th: Christopher Brasher, of Spring, Texas, 35-13
Jim Tutt, of Longview, Texas and Kyle Mabrey of McCalla, Ala. both caught 5-pound, 11-ounce largemouth and shared Snickers Big Bass honors.
Marsh goes slow for co-angler lead
Marc Marsh, of Prosperity, S.C., gained eight spots today to take over the co-angler lead. He caught 15-10 on day one and followed with a day-two limit of 15-2 for a two-day total of 30-12. Marsh caught his fish on a Carolina rig, jig, chatterbait and Senko.
"This morning, we started out fishing kind of slow and I caught some fish on a Carolina rig on the outside edges," Marsh said. "Then the fish kind of shut off and I we made some adjustments and changed baits and caught a few more. We made a move and started fishing some different structure and we got around some big fish. Overall, it was a good day."
Larry Kempler, of Bluemont, Va. took second place with 30-3, while Doug Caldwell, of Kane, Penn. placed third with 29-9. Christopher Hall, of Clarks Summit, Penn. was fourth with 29-7 and Mark Myers, of Cedar Falls, Iowa finished fifth at 29-5.
Best of the rest
Rounding out the top-10 co-angler leaders at the FLW Tour Major event on Lake Champlain:

6th: Shane Winchester, of Glasgow, Ky., 28-14
7th: Glenn Babineau, of Mechanicville, N.Y., 28-4
8th: Nick Hensley, of Cumming, Ga., 28-2
8th: Jason Johnson, of Gainesville, Ga., 27-13
10th: James Schneider, of Watervliet, NY, 27-12
Hensley wins Co-angler of the Year
Making the top-20 cut for day-three competition wasn't the only good news for Hensley today – his performance enabled him to slip past fellow co-angler Leo Reiter in the Co-angler of the Year race and claim the title in only his second FLW season.
Hensley's road to the COY title included a third place finish at Table Rock Lake, fourth at Beaver Lake and eighth at Kentucky Lake. Hensley's achievement qualifies him for the Forrest Wood Cup, set for Aug. 9-12 on Lake Lanier in Duluth/Gainesville, Ga.
"That's my backyard, so qualifying for (the Cup) was my main goal coming into this season," Hensley said. "I'm very confident that I can catch them. I'd like to do well on my home lake."
Noting that fishing from the back of the boat has been a huge learning experience, Hensley said that his most valuable lesson has been one of perspective: "I learned that you shouldn't fish against your pro, you have to fish water that they're not fishing. Last year, I tried to fish against my pros and I was just messing up. I learned that I needed to be doing my own thing."
Day three of the FLW Tour Major event on Lake Champlain continues at Saturday’s takeoff, scheduled to take place at 6:30 a.m. (Eastern) at Dock Street Landing located at 5 Dock St. in Plattsburgh, N.Y.
Posted by IBASSIN.COM at 9:24 AM