BASS PRESS RELEASE
MANY, La. — On Saturday Brent Chapman returned to the school of bass that produced 25 1/2 pounds for him early Friday.
He milked it again for 16 pounds, 5 ounces, and the lead for another day in the Bassmaster Elite Series Toledo Bend Battle.

He’s hungry to nail down his first Elite Series win.
But his 59-pound, 14-ounce total over three days left him anything but certain it would come Sunday. Even if Marty Robinson was not just 1-5 behind him in second place with 58-9, and even if he had a bigger cushion than the 10 pounds he does have on the angler sitting in 12th place, Chapman was not feeling easy.
He knew what Tim Horton’s 27-9 sack of Saturday meant.
“This tournament is going to come down to the guy who catches a big bag of fish tomorrow, and I just hope that’s me,” said the pro from Lake Quivira, Kan. “Anybody in the top 10, maybe the top 12, is going to have a shot at winning this thing.” 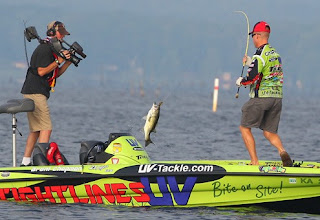 Horton was third with 58-1; Day 1 leader Cliff Pace was fourth with 57-12; and Matt Herren was fifth with 56-11.
The field was cut to the Top 12 for Sunday’s competition. The prize is $100,000 and a Bassmaster Classic entry in 2013.
Chapman had hoped for another 25-plus pounds like he had on Friday, but conditions changed. He wasn’t sure exactly why more of the big bass in the deep school he’s been working didn’t bite Saturday.
“My theory is that maybe they’re generating electricity on a weekday, and that allows those fish to bite a little better, and on a weekend it doesn’t,” he said.


“I don’t know what to expect for tomorrow. I am going to stay there until about 8:30, then I’m going to make a move. I’m not going to sit there and hope. This is too good of a lake, and there’s not reason not to go to another spot where they’ll bite later in the day.”
He said he may have stayed on his spot too long Saturday — he left about 11 a.m. — because he got no additional bites after the first-light flurry.
He had his 16 pounds in his livewell by about 8 a.m.
He said he has four other places to go to if his sweet school shuts down. He caught a few good-sized fish on them in practice, and thinks they have potential.
“As much as I’m hearing that these fish are moving around for everybody, there’s nothing to say I couldn’t pull up on one of those and find a giant school of big ones be there,” he said. “I’ve got an opportunity here to win.”
Second-place holder Robinson sacked 21-5 Saturday. That pulled him up from sixth. Like Chapman, he’s got a shot at his first Elite win.
Robinson of Lyman, S.C., has about six spots he’s been working all week. One, which had yielded a 5-pounder, he swore off Friday as depleted.
But Saturday morning, when the wind shifted to come from out the south, he decided his 5-pound spot might be worth one more stop. He was right.
“I don’t know for sure if that’s what triggered them today, but the big ones were biting there. I caught a 4 and two 5 1/2’s,” he said. “Obviously there’s some good ones there, but they’re picky.”
Robinson said the key for him Sunday will be making the right decisions: “When to leave, where to go, how long to stay — those are the three biggest.
From Muscle Shoals, Ala., Horton rocketed into third place from 21st with his 27-9 sack. It included an 8-15, but wasn’t the Carhartt Big Bass of the day. That honor went to Florida’s Terry Scroggins for a 9-3.
Horton said the genesis of Saturday’s big catch actually happened late Friday afternoon. He had only about 10 pounds with an hour to go. He checked a place he’d fished at last year’s Elite event on Toledo Bend. What he saw was a nice surprise.
“The bass were stacked on it,” he said. “I only had 15 minutes to fish it. I couldn’t wait to get there this morning. It was a bass on every cast for an hour.”
When the bite stopped, he had about 22 pounds. Then he made a 40-mile run to a spot he’d been on earlier in the competition.
That’s where he caught his 8-15. He said it was a single fish holding on a rough, gravely spot on the bottom. It bit a 10-inch Carolina-rigged Yum worm.
“Maybe that magic spot will put something special out again tomorrow,” said Horton, the Toyota Tundra Bassmaster Angler of the Year in 2000 — his rookie year.
He has wins on his Bassmaster record. The most recent was an Elite title taken on Lake Champlain. That was in 2007.
Besides the Toledo Bend title, Elite pros are competing on Toledo Bend for Toyota Tundra Bassmaster Angler of the Year points. Those count toward post-season and Bassmaster Classic qualifications as well as the AOY title.
Randy Howell of Springville, Ala., lost his lead in the points race this week when he missed the Top 50 cut on Friday.
That opened the door for Chapman to regain the points lead he had lost to Howell after the Douglas Lake event in May.
An event’s points aren’t awarded until the tournament is over, so interim results aren’t official, but after three days Chapman led, followed most closely by David Walker, Herren, and Ott DeFoe.
The Sunday finale of the Toledo Bend Battle will begin at 6:30 a.m. CT when the Top 12 take off from Cypress Bend Park, 3462 Cypress Bend Drive, Many, LA 71449.
The Bassmaster Elite Series Fan Festival will open at noon. At 2 p.m., before the Elite weigh-in, the Carhartt Bassmaster College Series will present the Louisiana-Texas Shootout, a bragging-rights weigh-in of college anglers from both states.
The Elite’s final 12 will weigh their catches beginning at 3:15 p.m.
There’s no admission fee for any Bassmaster event.
Bassmaster.com will continue its all-day coverage with Bassmaster War Room interviews and updates based on BASSTrakk catch reports, from-the-water blogs, video, and more.
Live, streaming video of the weigh-in and real-time leaderboards will start at 3:15 p.m. CT. Final results and extensive photo galleries will be posted after weigh-in.
Posted by IBASSIN.COM at 11:06 PM