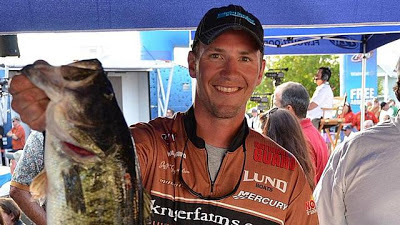 (photo: FLW)
Canadian bass fisherman Jeff Gustafson announced Thursday he has committed to fishing the entire 2013 Walmart FLW Tour season. Gustafson competed in the four FLW Tour Opens in 2012 and cashed checks at each, despite being a rookie with little or no previous lake knowledge. He finished the season 14th in the points race.
Known in the industry as “Gussy,” the Keewatin, Ontario, angler has quite a reputation in the North Country as a guide and tournament angler – having both the Kenora Bass International and the International Falls Bass Championship. In addition, the 30-year-old hosts his own TV show called “Fishing with Gussy” as well as writes a weekly outdoors column called the “Livewell” for the Fort Frances Times. Gustafson is also active on social media and quickly became a fan favorite this season on FLW’s On-The-Water coverage page.
“Having a solid rookie season in the Opens makes me even more excited for next year,” said Gustafson. “Fishing the tour down south was an eye-opening experience. Now that I’ve got my feet wet I’m ready for a full season.”
Gustafson will once again run a Kruger Farms/International Comfort Products-wrapped Lund Predator with a 225-horsepower Mercury Optimax.
The 2013 FLW Tour season opener kicks off Feb. 7 on Lake Okeechobee, the same fishery where Gustafson notched a top-20 finish this February.
Posted by IBASSIN.COM at 7:35 AM