Shaw Grigsby Lets Everyone Know Who is King of the Spring.
by Deb Johnson
BAINBRIDGE, Ga. — If bed fishing’s the game, Shaw Grigsby’s the name.
And that’s just how it went Thursday, the first day of the Dick Cepek Tires Bassmaster Elite at Lake Seminole presented by Hardee’s. Out of Bainbridge, Ga., the event is the 2014 Elite Series season opener.
Well-known for his talent of enticing big bass on or near beds to take his bait, Grigsby led the 108-pro field by 3 pounds, 7 ounces, with a 30-pound, 5-ounce day’s total.
“It was a perfect day,” said Grigsby, who caught the entire 30-plus pounds by 10 a.m., and then sat back and ate cold chicken. “One of those great days — amazing.”
Grigsby took the first step toward duplicating his 2011 season-opener victory in Florida, the ninth and most recent win of his storied Bassmaster career. Two of those titles were taken at Lake Seminole.
Grigsby’s 3-7 lead was over Bernie Schultz, who weighed 26-14. A largemouth of 10-10 was the jewel of Schultz’s bag — and the largest single bass brought to the scales Thursday.
Coincidentally, the two leaders both hail from Gainesville, Fla. 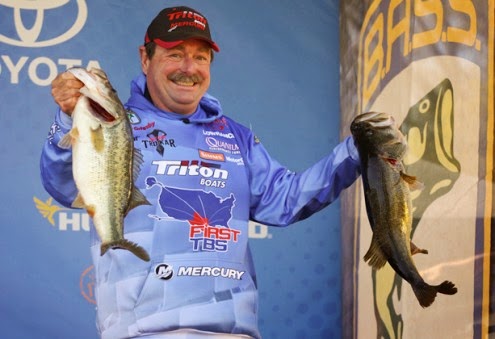 Kevin Short of Mayflower, Ark., was in third place with 25-9, trailing the leader by 4-12. Fourth place was pegged at 24-11 by Bret Hite, a 2014 Elite rookie from Phoenix, Ariz. In fifth was Tommy Biffle of Wagoner, Okla., with 23-13.
Local favorite J Todd Tucker of Moultrie, Ga., who calls Lake Seminole home water, ended his first day in 18th place. His Day 1 weight of 18-14 was for four bass, one short of the five-fish limit.
The first-place prize of the event is $100,000 and an automatic berth in the 2015 Bassmaster Classic. Pros also earn points that count toward the Toyota Bassmaster Angler of the Year award and a Classic qualification.
Grigsby said his largest bass of the day were two over 7 pounds. They came from one of his several bed-fishing spots, he said, as did most of the bass he hooked into Thursday.
For the second round on Friday, Grigsby said he’s go back to his magical spot.
“I don’t know whether I’ll get a bite in that same area, but I’ve got a couple more areas to hit, and then I can always go sight-fishing to get decent little sacks,” he said.
Grigsby said he’s targeting pre-spawners moving up to beds as well as fish actually on beds.
The cold front that came through Wednesday night did not effect his bite Thursday, unusual behavior for spawning fish, he said.
Schultz’ behemoth largemouth of 10-10 set the bar high for the event’s Carhartt Big Bass bonus of up to $1,500. He said he caught the bass sight fishing at about noon.
“She was on a bed with a male that weighed about 4 pounds; I caught him next,” Schultz said.
Fish came in pairs for Schultz. He caught a second couple (male and female) soon after the first two. A fifth bass soon finished his limit.
Short, unlike many in the field, was not bed fishing or sight fishing. He established a pattern during practice and stuck to it.
“You gotta love it when the plan comes together,” Short said.
Neither did Biffle try to “look at ’em.”
“I haven’t seen one of the bed. If I did happen to, I’d try for it. But I don’t like to hunt them,” said Biffle, who would describe his pattern only as “just fishing.”
The full field of 108 will return to the water at 7:30 a.m. Friday. Takeoff will be at Earle May Boat Basin, 100 Boat Basin Circle, Bainbridge. The weigh-in will begin at 4 p.m. at the same location.
Opening at noon Saturday and Sunday, Bassmaster Elite Series Expo presents the products of Elite Series sponsors. People ages 14 and up can sign up for free demo rides in Nitro, Skeeter and Triton boats powered by Mercury ProXS and Yamaha SHO engines.
There’s no admission charge to any Bassmaster event, and parking is free.
Friday through Sunday, the 11th annual Bainbridge River Town Days will offer many kids activities, plus vendors and Flames on the Flint, a barbecue cook-off. Town Days also will include many free concerts, including Chris Cagle, Saturday’s headliner.
The local host of the Elite event is the Bainbridge-Decatur County Chamber of Commerce (http://www.bainbridgegachamber.com).
2014 Bassmaster Elite Series Official Sponsors: Toyota, Bass Pro Shops, Berkley, Evan Williams Bourbon, Humminbird, Mercury, Minn Kota, Nitro Boats, Skeeter Boats, Triton Boats, Yamaha
2014 Bassmaster Elite Series Supporting Sponsors: Booyah, Carhartt, Diet Mountain Dew, Livingston Lures, Lowrance, Plano, Power-Pole, Rigid Industries, Shimano
About B.A.S.S.
B.A.S.S. is the worldwide authority on bass fishing and keeper of the culture of the sport. Headquartered in Birmingham, Ala., the 500,000-member organization’s fully integrated media platforms include the industry’s leading magazines (Bassmaster and B.A.S.S. Times), website (Bassmaster.com), television show (The Bassmasters on ESPN2), social media programs and events. For more than 45 years, B.A.S.S. has been dedicated to access, conservation and youth fishing.
The Bassmaster Tournament Trail includes the most prestigious events at each level of competition, including the Bassmaster Elite Series, Bass Pro Shops Bassmaster Open Series presented by Allstate, B.A.S.S. Nation events, Carhartt Bassmaster College Series, Bassmaster High School Series, Toyota Bonus Bucks Bassmaster Team Championship and the ultimate celebration of competitive fishing, the GEICO Bassmaster Classic presented by Diet Mountain Dew and GoPro.
Posted by IBASSIN.COM at 1:30 AM