By Deb Johnson
“That got things rolling, and gave me a lot of confidence in what I’m doing,” said Hite, the Bassmaster Elite Series rookie who moved up from fourth place into Friday’s catbird seat in the Dick Cepek Tires Bassmaster Elite at Lake Seminole presented by Hardee’s.
The Phoenix, Ariz., pro ended his day with 20 pounds, 11 ounces. Added to his 24-11 already on the board, Hite had the lead in his first Elite appearance. His 45-6 total gave him a 14-ounce jump on Bernie Schultz of Gainesville, Fla.
Schultz held fast to his second-place standing achieved the first day, when a 10-pound, 10-ounce behemoth made his weigh-in bag sag. His 17-10 of Friday brought his weight to 44-8.

Kevin Short of Mayflower, Ark., owned third place — for the second consecutive day — with his 43-3 total. 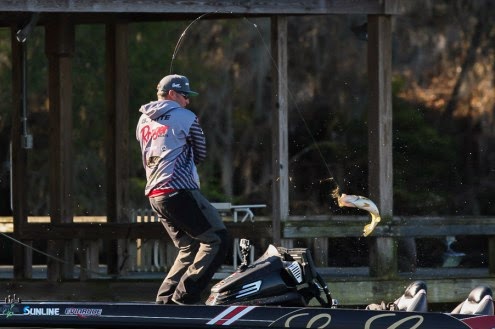 A rookie like the leader, Justin Lucas of Guntersville, Ala. catapulted from 27th place into fourth place with the day’s largest bag, 25-9. In fifth was yet another rookie, Chad Morgenthaler of Coulterville, Ill., with 43-0.
Day 1 leader Shaw Grigsby of Gainesville, Fla., slipped to sixth place after bringing in 12-5.
Hite, unlike some pros in the field, is not banking on the bank. In this case, “the bank” means focusing on bedding bass.
“I’m targeting prespawn fish,” said Hite. “Water temperature is not really at the point where enough fish are going to the bank. I wanted to key in on the fish that are replenishing, that are going to be there day after day.”
After the two 4-pounders that set him in the right direction, Hite’s day got better.
“I ran to a secondary spot, and there were a lot more fish there than I realized. I had quite a few bites — then got out of there,” he said.
That was at about 1 o’clock. Hite backed off his fish and hunted for new water in hopes he could develop alternate plans for the two remaining competition days.
“In a four-day event, fish management is huge,” Hite said.
For Schultz, the obvious difference between his two competition days was a 10-10 lunker taken from a spawning bed on the first, but nothing near that weight on the second. His two largest bass were in the 4-pound range, he said.
Schultz said the fog delay of an hour and 20 minutes Friday morning changed his game plan. He decided to not make one of his spawning hotspots the first stop of the morning.
“Because of the delay, I went to my open-water pattern first. Then I went to sight fish, but never really saw any big fish at all,” he said.
Short also was affected by the delay.
“I think it made a lot more difference than I thought it would,” he said.
On Friday, Short said, he had caught 17 to 18 pounds by the time he made his first cast on Saturday.
He turned his slow day around when he boated a 6-3 and a 5-plus-pounder. That happened only a few minutes before he had to head back to shore and check in.
Hite won the Livingston Lures Leader Award of $500 for his second-day domination of the field.
The big fish of the day, a 7-12, was by James Niggemeyer of Van, Texas. But the 10-10 of Thursday by Schultz remains the largest so far. The big bass over four days is worth the Carhartt Big Bass bonus of up to $1,500.
Lucas won a $250 bonus from Rigid Industries for being the participating angler who achieved a 25-pound or heavier bag. The same award went to Short on Thursday.
The field was cut to the Top 50 for Saturday’s round. The pros will begin Day 3 at 7:30 a.m. from Earle May Boat Basin, 100 Boat Basin Circle, Bainbridge. The weigh-in will begin at 4 p.m. at the same location.
By Sunday, only the Top 12 will remain in the competition for a first-place prize of $100,000 and an automatic berth in the 2015 Bassmaster Classic. Pros also earn points that count toward the Toyota Bassmaster Angler of the Year award and a Classic qualification.
Continuing through Sunday, the 11th annual Bainbridge River Town Days will offer many kids activities, plus vendors and Flames on the Flint, a barbecue cook-off. Town Days also will include many free concerts, including Chris Cagle, Saturday’s headliner.
Opening at noon Saturday and Sunday, Bassmaster Elite Series Expo presents the products of Elite Series sponsors. The Expo includes free demo rides in Nitro, Skeeter and Triton boats powered by Mercury ProXS and Yamaha SHO engines. Saturday’s Expo also will feature the premier of GEOBASS, a new video adventure series from Costa. More GEOBASS episodes will be shown in conjunction with subsequent 2014 Elite Series events.
There’s no admission charge to any Bassmaster event, and parking is free.
The local host of the Elite event is the Bainbridge-Decatur County Chamber of Commerce (http://www.bainbridgegachamber.com).
On ESPN2 on Sunday, March 20, 8 to 9 a.m. ET, The Bassmasters will present a show covering the Lake Seminole event. The episode will reair on ESPN2 on Sunday, April 13, 8 to 9 a.m. ET, and again on The Outdoor Channel on May 12.
Posted by IBASSIN.COM at 2:00 AM