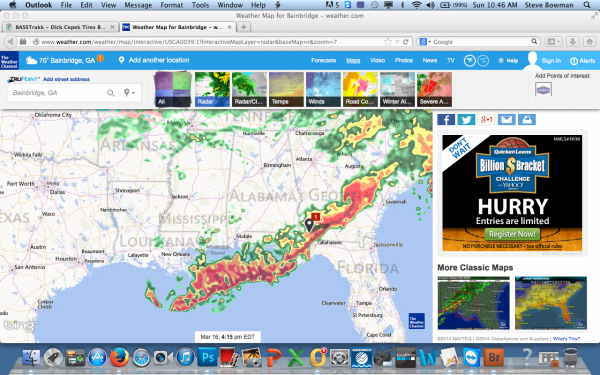 BASS Report
B.A.S.S. personnel are preparing for the worst, and it looks like the worst will be hitting here in Bainbridge at weigh-in time - 1 p.m. ET. According to the timeline on weather radar, we'll be in the thick of the storm as the weigh-in begins.

The main weigh-in stage has already been disassembled and stowed away. The smaller sound  stage will be used for the weigh-in, just as it was at Falcon Lake on Day 4 last year, when a wind storm hit.

Every bassmaster.com feature, like First Look and Hooked Up, will probably occur in abbreviated form this afternoon.
Posted by IBASSIN.COM at 12:02 PM