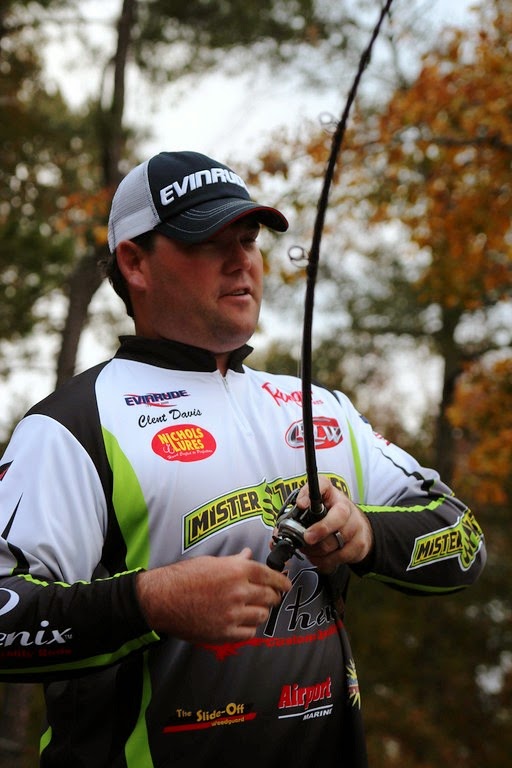 FLW Tour Pro Clent Davis, announces the addition of Bass Bomb fish attractant as a new sponsor for the 2015 season.  After two top five finishes in 2014 on the Walmart FLW Tour, Davis is looking to add accolades to his 2012 Walmart FLW Tour Rookie of the Year title.

In March, he will begin his fourth season on the Walmart FLW Tour at Florida's Lake Toho.  Starting off the year early in January, Davis will be fishing two events, including the Bass Pro Shops Bassmaster Southern Open stop at Lake Toho and a Rayovac Series Tournament at Lake Okeechobee.

In 2015,Davis will be using Bass Bomb, a new product from the makers of Buck Bomb. The Bomb products feature a revolutionary scent dispersal system that helps both novice and expert hunters and anglers achieve their outdoor goals. They also have a product line called Fish Bomb for fishermen.

It is common practice for fishermen to use scent to attract fish. Fish Bomb is a unique way of using scent to attract gamefish. In the past, with other scent attractants, fishermen have had to worry about mixing, storing, toting buckets and bottles of their favorite recipe. With these new products, anglers can be armed with a five ounce, shelf-stable, fit-in-your-pocket can of pure baitish oil fish attractant; including the new Bass Bomb, which is available in a combination shad / garlic flavor. Anglers can spray it on lures, soak their plastics and other baits in it or use it to make a slick in a cove; the options are endless when it comes to the uses for Bass Bomb.

Davis is proud to represent the company. "I'm really looking forward to this partnership with the people at Fish Bomb, and I'm humbled that they came to me when looking for someone to help promote their new Bass Bomb attractant," said Davis. "I've been using it for a few weeks now with great results and I'm looking forward to a successful 2015 season using the Bass Bomb on all my baits."

Jason Coleman from Fish Bomb said the company was equally as pleased with the addition of Davis. "The entire team here at Fish Bomb couldn't be more excited about the partnership with Clent as we launch our Bass Bomb line in 2015,"said Coleman.  "We know that Bass Bomb is the future of bass attractants so it only makes sense to partner with the future of bass fishing, Clent Davis."
Posted by IBASSIN.COM at 7:00 AM