Monroe and Poche Get More Than Slap on the Wrist from BASS.

At the recent Southern BASS Open on Lake Toho, Ish Monroe and Keith Poche got into a verbal and minor physical scrap. After their investigation, BASS has announced their disciplinary penalties. Public response to this incident has been huge and options vary greatly depending on who is writing or speaking. Many claim that when viewed under a sporting context like hockey or football, this is a very minor event. Others are discussed with both anglers and demand their heads on pikes. Yesterday, BASS made their announcement.
Here is their statement: 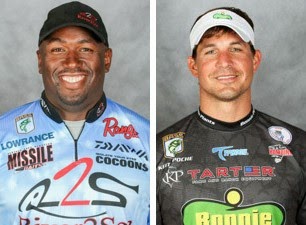 Akin also noted that B.A.S.S. has refunded the entry fees of the co-anglers paired with Monroe and Poche on January 16 in consideration for the effect the incident may have had on their fishing success.
Posted by IBASSIN.COM at 7:00 AM