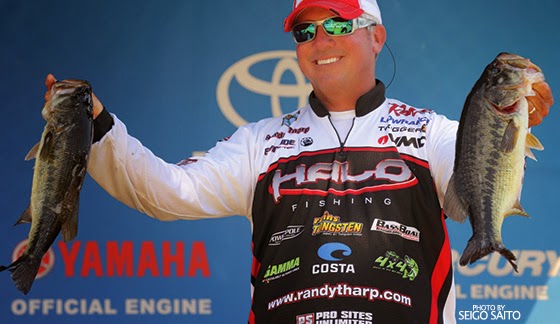 For years, Randall Tharp has used a Rapala® knife and cleaning table to prepare dinners of fish caught fresh from the sea. Now he’ll rely on the iconic brand to put food on the table in another way — throwing Rapala baits to win prize money in Bassmaster tournaments. The 2013 Forrest Wood Cup champion has joined Rapala’s pro-staff.
“Previously some of my favorite Rapala products were not even baits,” says Tharp, an Alabama native now living in Florida. “Down where I live, I clean fish with a Rapala fillet knife on a Rapala cleaning table almost every day. That’s how I prepare my dinner!”
Still, Tharp adds, he’s used Rapala baits “long before the last couple of years to put fish in my boat.” His favorites are “the whole DT® Series” of crankbaits and the Original Floating Rapala. The floater is one of his “all-time favorite” lures. “I’ve caught more bass on that little original Rapala balsa floating minnow lure than probably any other lure in my tackle box,” he says.
Tharp is the second Forrest Wood Cup champion on Rapala’s pro-staff. 2012 Cup Champion (and 2013 runner-up to Tharp) Jacob Wheeler signed with Rapala in 2012. Wheeler fishes on the FLW Tour. In 2014, Tharp fished both the FLW Tour and the Bassmaster Elite Series. As a B.A.S.S. rookie, he finished 13th in the Angler of the Year race and qualified to fish in the 2015 Bassmaster Classic Feb. 22-24 on South Carolina’s Lake Hartwell.


“Randall is one of the most talented anglers in the game right now, both on and off the water,” says Rapala Field Promotions Manager Dan Quinn. “He understands the promotional side of fishing as much as he knows how to catch ‘em, which makes him an excellent member of the Pro Staff.”
Tharp says “it’s an honor,” to represent such a well-respected company as Rapala, with such a huge catalog of baits and terminal tackle, which includes VMC, which he signed on last year to represent.
“It was really cool over the last season to learn more about an already great company in the fishing industry and I’m honored to part of the team,” he says. “It’s a big deal for me.”
The Rapala team is equally complimentary of Tharp.
“Randall showed what he could do this past year for VMC,” Quinn says. “and with Rapala lures being his confidence baits throughout his career, it was a natural progression to make him a part of the Rapala family. I look forward to a bright future with Randall and couldn’t be happier to be working with him!”
All the Rapala baits Tharp has long treasured — Original Floating Rapalas and DT-series crankbaits — are made from Rapala’s signature material, balsa. It’s what makes them so much better at catching fish than copycat baits made to look similar, he says.
“That’s one thing that separates Rapala baits from all other competitors on the market,” Tharp says. “Even as the company’s evolved, they’ve kept that balsa body as a key part of the arsenal. It definitely sets the baits apart. The buoyancy that balsa has, the things you can make a bait do when it deflects off of cover and stuff, it’s second to none.”
Posted by IBASSIN.COM at 7:00 AM