The “numbers game.”
It’s a term that Bryan Thrift used to describe his fishing on Lake Eufaula back in 2013 when he finished runner-up to Randy Haynes in a Walmart FLW Tour event.
The method to his numbers madness was to hit as many solitary objects – stumps, brush piles, rocks, logs – on the bottom of Lake Eufaula as humanly possible in an eight-hour tournament day.
When Thrift saw that Lake Eufaula was back on the 2015 Walmart FLW Tour schedule for May of this year, he grinned that patented Bryan Thrift grin because he already knew how to crunch the numbers at Eufaula.
And Thrift is still grinning. After sacking up a final-day catch of 15 pounds, 5 ounces to top off 69-14 for the week, Thrift made the numbers work for his fourth FLW Tour win. He added another $125,000 to his bank account. 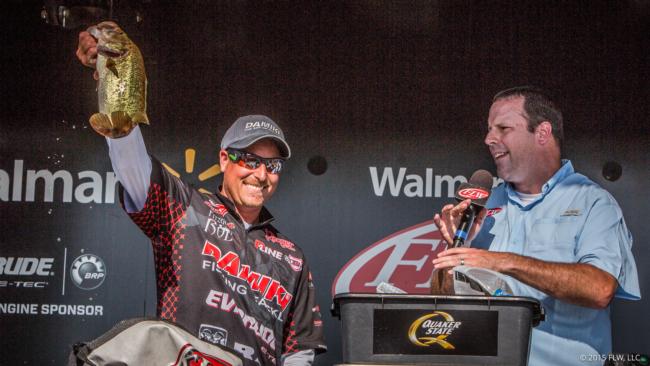 “This is my favorite lake in the country. I absolutely love it,” Thrift says. “I’ve wanted to win here so bad for so long. I’ve finished second here in two other FLW events [the 2013 Tour Major and 2010 FLW Series], so to finally get over the hump feels pretty good.”
Thrift’s numbers game is a model of absolute maximum efficiency on offshore objects sitting in water that’s anywhere from 5 to 15 feet deep. He works with mechanical precision to hit as many as 70 targets per day. For each target, Thrift uses his electronics to idle to within 50 feet of the target. He then breaks his forward momentum with reverse throttle, hops to the deck and fires a swimbait beyond the target. The object of his game is to waddle the swimbait right into the target in hopes that any unsuspecting bass holed up there will blast the lure.

His perfection in this process is measured in the number of times he can hit the target with the very first cast. If he doesn’t get a bite the first time, Thrift might sling the swimbait out there a time or two more, but then he is gone to the next.
As for the objects he is fishing, Thrift says he really doesn’t care what it is. It’s the size of the object that matters to him.
“I don’t really care about the big stuff,” he says. “I like for it to be small and compact; something that others won’t fool with and that I can cover in about two to three casts. It might only hold a single fish, but that’s why I want to have so many of those places to throw at. If I throw at enough of them I’m going to get five bites. It’s a numbers game, simple as that.” 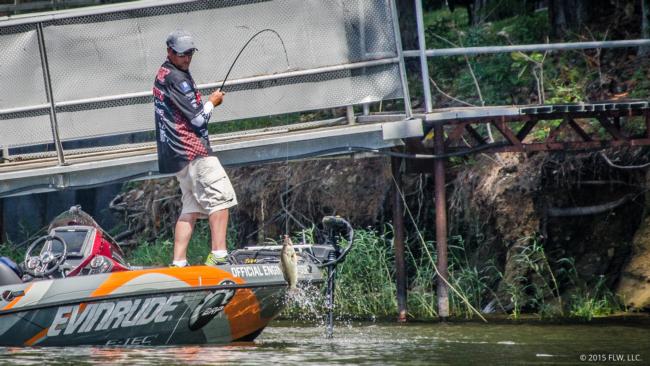 Thrift says he spent his entire practice idling flats looking for his targets. He put in 30 hours on his motor in three days of practice. In all, he found nearly 200 pieces of cover that made his waypoint list.
Thrift’s primary weapons in the numbers game were a couple of swimbaits, one rigged with a 1/4-ounce jighead for the shallower or thicker stuff and one with a 1/2-ounce jighead for deeper objects.
Thrift’s weights got stronger each of the first three days – 15-15, 18-12 and 19-14, respectively – making it look as if his program was easy. But the numbers game is not an easy way of fishing by any means.
Sometimes he endured dozens and dozens of fishless stops before striking pay dirt.
While most of Thrift’s fish were derived from the offshore numbers game, Thrift did rely on a hollow-bodied frog fished shallow for a couple of his key keepers on days two and four.
“When I’d go a long time without getting a bite and I started to get frustrated, I’d go to the bank and throw a frog to get a bite and get my head back in the game,” he says. “That happened today. I was starting to spin out a little bit, went to the bank and on about my fourth cast with a frog, I caught a nice 3-pounder. That got me back on track. I headed back out to run my offshore stuff again, and things started clicking then.”
Refocused, Thrift proceeded to put together the second-largest limit of the final day, surpassed only by Randy Haynes’ 15-06, to jump ahead of day-three leader Troy Morrow by almost 3 pounds for the FLW Tour victory. 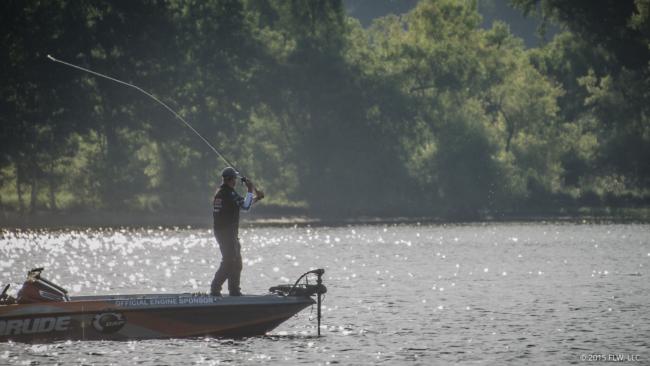