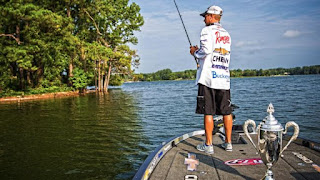 COLUMBIA, S.C. – FLW and Capital City/Lake Murray Country Regional Tourism Board announced Saturday that Columbia, South Carolina, would once again be hosting the Forrest Wood Cup presented by Walmart, the world championship of bass fishing, Aug. 11-13, 2017, on Lake Murray. The last time the Forrest Wood Cup was held in Columbia was 2014 and hometown hero Anthony Gagliardi of Prosperity, South Carolina, made professional bass-fishing history, becoming the 18th Forrest Wood Cup champion.
“We couldn’t be happier to be bringing the 2017 Forrest Wood Cup to Lake Murray,” said Kathy Fennel, FLW president of operations. “We’ve had great success hosting our FLW events in Columbia in the past and the fan attendance and enthusiasm at our previous tournaments has made bringing the Cup back an obvious choice. We are proud to bring our championship event back to our fans in South Carolina.”

Lake Murray and the Columbia area are a very familiar destination for FLW. The city has played host to both the 2008 and 2014 Forrest Wood Cups and numerous FLW-sanctioned tournaments. The 2017 Forrest Wood Cup will mark the 22nd anniversary of the championship event. The event will be held at the Colonial Life Arena with the Expo held at the neighboring Columbia Metropolitan Convention Center.
“We are so proud to once again welcome the Forrest Wood Cup to the ‘Jewel of South Carolina’. The economic impact felt when we hosted this event in 2014 is award winning,” said Miriam Atria, president and CEO of the Capital City/Lake Murray Country Regional Tourism Board. “The fans in South Carolina are extremely passionate about bass fishing and we are excited to bring another world-class event that Lake Murray Country can enjoy.”
Posted by IBASSIN.COM at 4:30 AM