For Canadian anglers this will be under the Storm label. 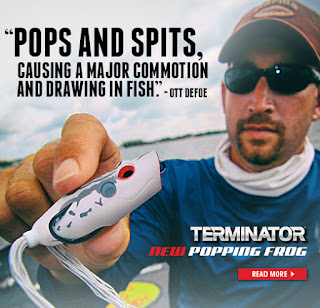 “With its cupped face, the new Terminator® Popping Frog pops and spits, causing a major commotion and drawing in fish,” says Ott DeFoe, a four-time Bassmaster Classic qualifier and 2011 Bassmaster Rookie of the Year. “But it also walks very well, too. Other frogs can maybe do one or the other well but not both. I think Terminator really hit a home run with this one.”
DeFoe has already caught a lot of fish on the Popping Frog, which he helped design. “It’s already proven its merits to me in a few tournaments this year,” DeFoe says. “I’ve thrown it a lot and caught a lot of fish on it. It’s been pretty awesome.”
When the conditions call for frog fishing, DeFoe will tie on a Popping Frog about 80 percent of the time. “In most cases, especially around scattered grass — stuff with a lot of holes in it — I’m going with that one,” he says. “I like the added action and sound it offers.” When bass are holding under really thick mats of vegetation, however, he’ll turn to the Terminator Walking Frog, which he helped design as well.
By varying retrieve cadence and how much slack you give it on the stop, you can make a Popping Frog attract fish in different ways. “If you keep it tight-lined, it doesn’t want to walk as much and you can make it chug really hard,” DeFoe says. “If you twitch it on a slack line — a lot like you would walking a topwater hardbait — then it’s going to have a lot more walk and side-to-side action.”
Both the Popping Frog and Walking Frog feature a custom VMC® frog hook, round-rubber legs, a heavy-duty welded line tie and lifelike detail from nose to rear. Both are tail-weighted to increase casting distance and stability on the retrieve. The bodies of both are extra soft, easily compressing when bass bite them to increase your hook-up ratio.

“A good frog needs more than just a fancy paint job,” DeFoe says. “It needs to walk right on every cast and its hooks and weight need to stay out of each others’ way. Most other frogs fall short in that regard.”
An ability to shed water between casts is another feature that sets apart Terminator frogs. A water-logged frog is hobbled by added weight and unbalanced action, throwing off its cadence and causing big bass to take a pass.
“Having as little water in your frog as possible on every cast is a big deal to keep the action right,” DeFoe says. “So we added a drain hole to clear out any collected water before every cast.”
The Terminator Popping Frog measures 2 1/2 inches, weighs 9/16 ounces and comes in 16 color patterns: Hot Shad, Bluegill, White Camo, Black Camo, Cocoa Camo, Hot Mud Camo, Brown Camo, Yellow Leopard, Lime Leopard, Green Leopard, Hot Chartreuse Shad, Smoke Silver Shad, Bull Frog, Ghost Pearl, Ghost and Black Chartreuse Leopard.
Posted by IBASSIN.COM at 4:30 AM