By Steve Bowman
BASS PRESS RELEASE
Rick Mason is one of the most viewed, yet unseen men in Bassmaster history. 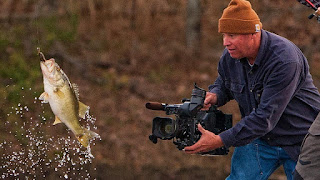 Mason, a Bassmaster cameraman for the past 17 years, passed away Monday of a heart attack. The 54-year-old man best described as a “quiet giant” behind the scenes of Bassmaster has left a gaping hole in more ways than one among the Bassmaster family.
“I’m still in shock,’’ said Kevin VanDam, who had spent many competition days with Mason as his cameraman. “He’s like a brother to me. He’s always been that positive influence, quiet, strong: The guy you want to have a beer with at the end of the day.”
To most of the Bassmaster faithful, Mason is the sandy-haired block of man toting a camera in the back of a leader’s boat during an Elite Series event, bringing exciting catches and heart-breaking moments to life with his video camera. Lately, with Bassmaster LIVE and the raw nature of the event, he’s the unseen voice asking questions, to flesh out the story on a featured angler. His presence, though, is woven throughout virtually every part of a Bassmaster event.
He, along with his brother Brian Mason, were the Mason Boys, both nephews of Bassmaster co-owner Jerry McKinnis, but together recognized as the de facto backbone of the road crew for any and all JM Associates television projects, including Bassmaster.