THE MUST HAVE REEL FOR EVERY DAY, EVERY WEEKEND 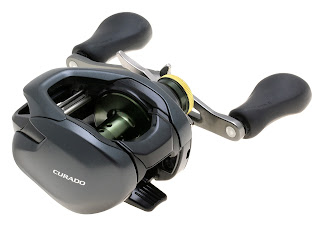 With a new look and technology focused on reliability and durability, Shimano’s all-new Curado 200 K series baitcasting reels are ready for anything from hardcore tournament use, to day-after-day, weekend-after-weekend performance. The new Curado series was just introduced at the tackle industry’s annual trade – ICAST – where it took ‘best new freshwater reel’ honors in the event’s ‘New Product Showcase’ awards. Starting the week of July 17, select tackle retailers will already have these award-winning reels available for anglers.
A long-time favorite among bass anglers and also for coastal saltwater use, the six new Curado 200K reels – both left- and right-hand retrieve models offered - include the 200K and 201K with 6.2:1 gear ratios, the 200KHG and 201KHG with 7.4:1 gear ratios, and the 200KXG an 201KXG with 8.5:1 gear ratios. Each now features a host of new innovative Shimano baitcasting reel technology, most notably MicroModule gears, SVS Infinity braking system, and a smaller platform ergonomic shape.
For smoother and sensitive rotation, Shimano’s MicroModule gearing provides more gear engagement between the drive gear and pinion gear. Shimano’s upgraded SVS Infinity centrifugal brake system – introduced on the Aldebaran reels - offers both adjustable internal brakes and a wider adjustment range with the external dial. It allows the new Curado reels to cast everything from light to heavy lures without opening the sideplate. The new compact Hagane Body – 10-percent smaller than past versions - is easier to palm and yet has a wider spool opening.
“Not only will anglers notice a definitively smoother operating Curado than previous models, the smaller platform without any line capacity reduction will be the other instantly noticeable feature,” said Shimano regional sales rep Drew Sadler, who when not assisting tackle shop owners and anglers finds time to fish B.A.S.S. and FLW weekend tournaments. “I had the pleasure of field-testing these new reels on Kentucky Lake, Guntersville and Table Rock during tournaments, and very reluctantly returned them to Shimano’s product development crew. But thankfully as a sales rep, I already have some of the first production reels to show dealers and fellow bass anglers in my home state of Kentucky, and a few will find their way into my boat waiting for the weekend.”

Along with the new Shimano technology on the new Curado K reels, anglers will notice the overall lightweight feel from the aluminum frame, the CI4 material ‘A’ side sideplate, and a graphite ‘B’ side sideplate. Even the appearance of the new reels will appeal to anglers who have been using Curado reels for nearly an entire generation – the sideplates have a matte black finish, with ‘Curado green’ color on the spool and cast control knob.


With longer 45mm length handles for both comfort, leverage and power, all six Curado K sizes – when filled with PowerPro Maxcuatro braid - can hold from 230 yards of 30-pound test, and up to 120 yards of 65-pound. With mono, the reels hold from 180 yards of eight-pound, and up to 110 yards of 14-pound. The 200/200K and 200/201KHG reels weigh 7.6-ounces, while the high-speed 200/201KXG reels tip the scale at 7.8-ounces. All sizes have six shielded anti-rust ball bearings – an added plus for saltwater use, along with a one-way roller bearing for zero handle back-play.
Posted by IBASSIN.COM at 12:30 AM