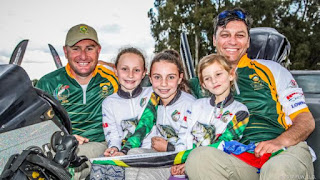 South Africa raced to the top on the third and final day of the XIII Black Bass World Championships to earn the gold medal of world bass fishing while the United States surged to silver.
The South African team, dressed in green and gold country colors for the final tourney day, might have been twice a bridesmaid the last two years, earning silver in both Italy and Portugal, but it now owns the title of world champion.
The elite American team ended day one in sixth position, and by day three scratched its way to a second-place finish. The anglers on Team USA gained strength from the first day to the last. One can only be reminded of the Vince Lombardi quote, “I’ve never lost a game, but have upon occasion run out of time.”
“Our approach for the tournament was to stay consistent and be in the hunt. We wanted each of our boats to bring in 8 to 10 pounds a day,” says the U.S. team manager Lionel Botha. “I think we did a pretty good job.”
Italy, a strong competitor who held top spot on day one, lagged on the final day and remained unable to outmaneuver the powerhouse American team, finishing third and earning bronze. It became a game of ounces on a South African day of mixed clouds, thunderstorms and heavy rain.
The European country of Spain made a surprise appearance on the leaderboard and unseated Germany for fourth place. Germany held a top-five position throughout the tournament before being toppled on Saturday and falling to eighth. Fifth place was awarded to Zambia, an African country much closer to the equator without bass.
Here are the final top-10 rankings for the XIII Black Bass World Championships:
1. South Africa
2. USA
3. Italy
4. Spain
5. Zambia
6. Zimbabwe
7. Namibia
8. Germany
9. Swaziland
10. Mexico

The South Africans have put together a crackerjack bass team over the last few years, consisting of top anglers capable of competing anywhere in the world. Team captain Justy Varkevisser is widely considered to be the best bass angler in the nation. Varkevisser has won virtually every bass title in the southern Africa region and competes often in the U.S.
“I leave in four days for the B.A.S.S. Nation event on Lake Hartwell, and then to the Costa FLW Series [Championship] event at Kentucky Lake in early November,” says Varkevisser, who credits his team with much of the heavy lifting on the road to gold.

He says his team’s knowledge of Vaal River spawning habits was at the core of its game plan. The Vaal River exhibits a few unique characteristics the South Africans used to their advantage. One important technique is to fish slowly for spawning fish, and the other important factor relates to river silt.
“The river has become silted over the last 10 years, and it causes bass to spawn in defined areas,” Varkevisser explains.
The silt covers the gravel where bass like to build nests, so the South African anglers targeted areas with heavy boat traffic, where boat wakes washed the silt off the gravel. They also targeted jetties and break walls that were built upon gravel. River current exposes the old gravel beds on the upstream side, while the downstream side remains silty. The South African team not only targeted spawning fish in those specific areas, but focused on postspawn fish far upstream when competitor boats stacked up in the more obvious bedding spots.
The champions employed soft plastics on active spawners and a combination of spinnerbaits and jerkbaits on the postspawn bass. A few other international teams picked up on the patterns, and those that realized the importance of a slow presentation fared best.
Eddy Perruzo, Italy team captain, disclosed early in the tournament that his anglers used practice days to “look more and fish less.” They found good concentrations of spawning bass near the jetties and break walls in an area known as Millionaires Bend. The river location is about 9 miles downstream from the launching point and exhibits the clearest water.
The Italian anglers, three-time world champions, noted that many of the boat docks and slips in the region were too muddy to hold spawning fish, and they found harder bottom structure in other places. Initially, the European anglers found the bass reluctant to strike and began a regiment of finesse fishing with 5-pound-test line and a Texas rigged 4-inch soft-plastic bait, predominately a Yamamoto Stretch 40.
“We had to fish very slow,” says Italian vice-captain Simone Bruccoleri.
He says most of the time the bites were very subtle, but for very short periods of time the bass would become active and strike viciously.
The U.S. team came to Africa armed with a wealth of Vaal River knowledge thanks to Lionel Botha, a South African-born professional angler. Botha spent many days on the Vaal River honing skills that would later carry him to America.
“Our approach was to target spawning areas by sight-fishing,” Botha says.
The Americans found fish by sighting them on warm and sunny practice days, but stormy skies greeted them during the tournament and limited their ability to see the fish. The frontal system pushed many of the same fish off the beds.
The U.S. team caught fish on jerkbaits, a few on jigs but mostly on light line and soft plastics. The fish wanted a slow fall and subtle presentation. Botha says the use of light line contributed to several heartbreaking losses, including several 4-pound fish.
Although the American team hoped to return with a gold medal in hand, a second-place finish and a shiny silver medal amidst a field of top-rated anglers from around the world represents a major victory. The Americans adapted to a unique team concept scoring system and a tough challenge from the home team.
“The entire American team enjoyed this tremendously. The comradery was great,” says Botha. “We fish against each other in America, and this type of tournament brings us closer together.”