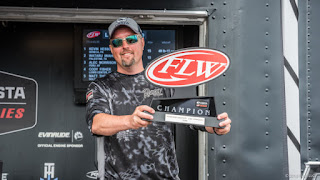 In 2017, Ron Nelson of Berrien Springs, Mich., won the Costa FLW Series Northern Division opener on Lake Champlain with 54 pounds, 9 ounces and a mix of largemouths and smallmouths. Today, Nelson won the 2018 season opener, which was presented by Power-Pole, this time with 15 healthy bedding smallmouths for a total of 60 pounds even.
After weighing five smallies on the final day for 19-8, Nelson edged out Brett Carnright for the title by 8 ounces. Nelson’s third Costa FLW Series win earns him $51,700 and a Ranger Z518 with a 200-hp outboard.

Winning with all smallmouths on Champlain is pretty unheard of in a multi-day tournament. It happens, but seemingly only once a decade or so. This week, Nelson sincerely tried to catch largemouths, and almost weighed in a couple, but in the end he went all brown.
“I had the same strategy as last time,” says Nelson. “These fish are so easy to catch. They gave me a lot of window to take my co-angler fishing and try to find a big largemouth. I just did not see the largemouths I saw last time. The water quality was not the same. It seemed dirtier this year; it just seemed off. I knew that a 4-pounder was a great fish no matter what it was, but I also knew I couldn’t catch a 5-plus smallmouth. I could have a real shot at catching a 5-plus largemouth.”
Nelson lost a big largemouth on day one that would have probably given him the lead right then. As it was, he triumphed over a pile of locals with slightly heftier bedding smallies.
“I learned pretty quick that you’d find quality fish in any section you went to. It was just a matter of learning a given section and putting time in,” says Nelson, who mostly fished the main lake around the Gut (the passage between Grand Isle and South Hero).