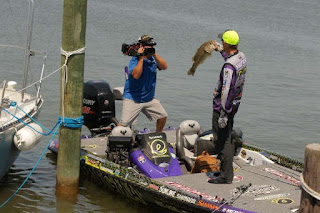 For the second time in the 2018 Bassmaster Elite Series season, B.A.S.S. was forced to postpone an Elite event because of massive flooding and unsafe boating conditions. And for the first time in Elite Series history, one of those events has been canceled altogether, the organization announced today.
The Huk Bassmaster Elite at Upper Chesapeake Bay presented by Mossy Oak Fishing will not be rescheduled, said Bruce Akin, CEO.
“By the time conditions on the upper Chesapeake Bay improved enough for competition, our great hosts at Harford County, Md., were unable to accommodate our event,” he said. “We could have switched the event to another fishery, but in consideration of Elite anglers who had important obligations during the times we had available, we elected to end the season with eight qualifying events, instead of the nine we had planned.
“We are really disappointed that we could not conduct the Maryland event as planned. We were anticipating huge crowds of spectators and excellent fish catches — as we always have on the upper Chesapeake.”

The regular season will end with the Bassmaster Elite at St. Lawrence River presented by Black Velvet, to be held Aug. 23-26 at Waddington, N.Y. Elite anglers ranked in the Top 50 of the Toyota Bassmaster Angler of the Year points list after that event will compete in the Toyota Bassmaster Angler of the Year Championship at Chatuge Lake at Young Harris, Ga., Sept. 20-23.
That championship will pay $1 million to the qualifiers based on cumulative AOY points, and it will determine the 2018 Bassmaster Angler of the Year as well as pro qualifiers for the Bassmaster Classic presented by DICK’S Sporting Goods at Knoxville, Tenn., next March.
The decision to cancel was reached after discussions with B.A.S.S. sponsors, as well as consultations with the Elite Advisory Board — an 11-member panel of pros elected by their peers — and polling of the Elite Series field.
The Chesapeake Bay tournament was postponed on July 25, the eve of competition, after dam operators upstream announced plans to release massive quantities of water that were expected to create flooding downstream and fill the waterways with debris.
In addition, Maryland Natural Resources Secretary Mark Belton issued a statement saying, “It is vitally important that anglers and boaters avoid the area downstream of the dam,” including the upper Chesapeake Bay. According to reports this week, flooding problems and hazardous boating conditions are ongoing.
“We regret the effect this decision has on our anglers who were hoping to improve their AOY standings in Elite No. 8, as well as on our sponsors, the host community of Harford County and our B.A.S.S. fans,” said B.A.S.S. Tournament Director Trip Weldon. “However, we had to consider the interests of all concerned when deciding to cancel.”