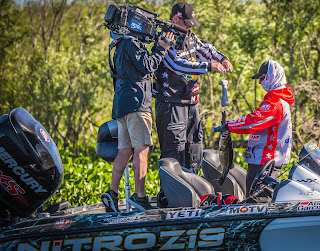 Major League Fishing (MLF) officials today announced a significant expansion beginning in 2019 with the goal of dramatically growing visibility and participation for the sport of fishing. The plans will help realize the founding partners' original vision for MLF to elevate competitive bass fishing and its top-tier pros to a national exposure level and grow a fan base on par with other top major league sports.

The expanded MLF program includes the addition of the Bass Pro Tour, a premier 80-angler, eight-event tour with a championship and heightened payouts, made possible through enthusiastic support from Bass Pro Shops and Outdoor Sportsman Group (OSG). Both partners are supporting MLF as part of their commitments to the future of the sport through participation and conservation efforts.

Under the visionary leadership of noted conservationist and founder Johnny Morris, Bass Pro Shops has been committed to connecting new audiences to the outdoors and advocating for conservation for more than 40 years. These foundational values directly align with MLF's innovative approach to competitive fishing.

"Bass Pro Shops has proudly supported MLF from its inception because we believed in its mission to elevate the sport of fishing. Today we're very excited to take the next step and help showcase this great sport to every household in America," Morris said. "We truly believe this partnership will create many positive and significant new opportunities for kids and families, professional anglers and the sport itself. Equally important to us is leveraging this popular platform to showcase the importance of conservation and promote responsible fishing practices."

"MLF has delivered on its promised vision every step of the way since Day One," Outdoor Sportsman Group Executive Vice President and Chief Operating Officer, Matt Hutchings said. "MLF has made fishing an even more popular spectator sport through televised events on Outdoor Channel and other networks, as well as Outdoor Sportsman Group's diverse media platforms in publishing and online. The MLF model is a proven success and we are excited to continue the journey with all of our partners towards future prosperity."

Today MLF tournaments reach a bigger audience than any other tournament of their kind, and television ratings and independent surveys consistently indicate the fast-paced, action-packed format resonates with anglers of all ages, and is especially effective at reaching the youth audiences essential for achieving long-term interest and growth.

While MLF will continue its popular Cup events and World Championship, airing on Outdoor Channel and CBS, respectively, it will now also have its own new Bass Pro Tour competitions and championship, and eventually tour qualifiers, all of which will use the same entertaining MLF format in which numbers caught can often contribute more to anglers' scores than do big fish.

"Seven years ago, Gary Klein and I settled on a mission to expand the sport of professional bass fishing through competitive tournaments with an all new and exciting made-for-television format," said MLF and Pro Bass Tour Anglers' Association (PBT) co-founder Boyd Duckett. "After assembling 13 more of the sport's top-level professionals, the PBT partnership was formed. We always believed if we elevated the visibility of our sport everyone in our industry would be a beneficiary.

"The preparation leading to this moment has been slow, methodical and well thought-out to ensure the outcome would be positive for everyone connected to the sport. As a result, we have a fully developed plan ready to go. Everyone in the fishing industry should appreciate the new path that Outdoor Sportsman Group and Mr. Morris have helped pave for the sport's future because of their own personal beliefs toward conservation and the responsible use of our fish and water resources."

MLF was formed in 2011 when Boyd Duckett and Gary Klein convinced television executives at Outdoor Channel to share their vision and invest in the concept for a live-action style broadcast during which all anglers could keep track of how other competitors were doing via on-board scoreboards.

"We're especially proud to be supporting anglers themselves, who make up an important part of MLF's ownership team," added Morris. "Our support for this expansion does not diminish our enthusiasm or support for other popular tournament series including B.A.S.S., FLW and hundreds of grassroots events across the country."

According to Nielsen ratings, MLF has been Outdoor Channel's top-rated show in first quarters for three years in a row.