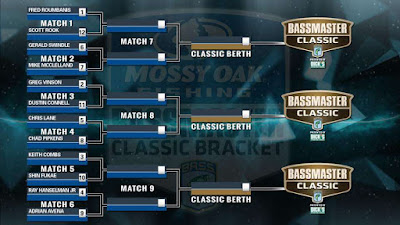 Twelve anglers took part in six head-to-head matchups during Wednesday’s semifinal round of the Mossy Oak Fishing Bassmaster Classic Bracket on Carters Lake.
The lake was stingy — and that’s putting it mildly.
After a bright full moon that likely caused the bass to feed heavily throughout the previous night, Arkansas angler Fred Roumbanis turned in the biggest weight of the morning session, landing five bass that totaled a modest 6 pounds, 13 ounces.
That was more than enough to give the top-seeded Roumbanis the lead in his bracket-style matchup with 12th-seeded Scott Rook who zeroed for the morning. The seeding order was determined Tuesday during a one-day fish-off.
“With this full moon, the fish are feeding all night long and that makes them really finicky,” Roumbanis said. “Using Garmin LiveScope, I can see the bass down there and I can see exactly what they’re doing. But you still have to trick a fish that’s full into biting.”
The morning session featured six anglers in three head-to-head matchups that lasted from 8-11 a.m. ET. Roumbanis started early with a 13-ounce keeper and then finished his limit with a 1-11 spotted bass at 10:43 a.m.
“I’m just following big schools of bait in about 20 feet of water and catching suspended bass,” Roumbanis said. “It’s not easy to force a bite.”
Rook, who has already announced his intentions to retire after this season, focused primarily on topwater fishing and failed to put a keeper in the boat.

During the other morning matches, Texas pro Keith Combs, the third-seeded angler in the event, caught just one spot that weighed 15 ounces and fell behind 10th-seeded Japanese pro Shin Fukae, who caught two bass for a total of 3-7.
No. 2 seed Greg Vinson of Alabama, was one of only two anglers to catch a five-bass limit Wednesday, and his total of 4-7 gave him the lead over 11th-seeded Dustin Connell who managed just two fish for 1-9.
“I just wanted to try to keep going up by a pound at a time, and that’s about what I did,” Vinson said. “With only three hours to fish, I was proud to get five.”
During the afternoon session, which lasted from 12:30-3:30 p.m., Alabama pro Gerald Swindle tied Roumbanis for the day’s heaviest weight with three fish that totaled 6-13. That gave Swindle, the sixth seed, a lead over seventh-seeded Arkansas angler Mike McClelland who caught only one fish that weighed 2-7.
“Knowing that we’re only fishing three hours — and that our weights carry over to tomorrow — my goal was just to get on the scoreboard,” Swindle said. “Getting five would have been nice, but I’m glad just to be above zero starting tomorrow.”
Swindle’s biggest hit came just 10 minutes before the session ended when he landed a 3-5 spot that ranked as the biggest fish of the day.
“I saw that big joker sitting there on my screen,” Swindle said, referring to the depthfinder he uses at the bow of his boat. “It was sitting there the whole time, and I just kept drifting and drifting and drifting. He finally bit.”
Elsewhere during the afternoon matches, ninth-seeded New Jersey pro Adrian Avena came close to securing a limit with four bass that weighed 4-15. He had a harrowing day, fighting hard to land one bass that stayed hung up in a brushpile for several minutes and then putting his fourth fish in the boat with just seconds remaining in the session.
Fourth-seeded Ray Hanselman Jr., who caught two bass that weighed 2-3, now trails Avena by nearly 3 pounds.
Eighth-seeded Michigan angler Chad Pipkens caught three bass that weighed 3-0 and barely leads fifth-seeded Alabama pro Chris Lane who caught just one fish that weighed 2-3.
The weights will carry over to Thursday, as the six pros who fished the afternoon session Wednesday will swap to the mornings and vice versa. The six matches will be decided based on the total weight from both days.
The six advancing anglers will fish in three head-to-head matches from 8 a.m.-2 p.m. Friday, with the three winners earning berths to the 2019 Bassmaster Classic presented by DICK’S Sporting Goods.
Posted by IBASSIN.COM at 6:44 AM