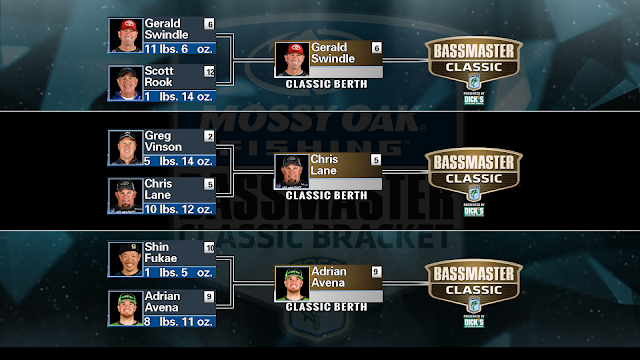 Adrian Avena told his followers on social media Thursday night that Friday’s final round of the Mossy Oak Fishing Bassmaster Classic Bracket on Carters Lake would be the most important six hours of his career. Then he went out and made the most of the opportunity. The New Jersey pro was one of three anglers — along with Gerald Swindle and Chris Lane of Alabama — who won their head-to-head matches during the Bracket finals to earn berths into the 2019 Bassmaster Classic presented by DICK’S Sporting Goods. Avena, who will be making his first trip to the Super Bowl of Professional Bass Fishing, caught a five-bass limit that weighed 8 pounds, 11 ounces, to easily win his match with Japanese pro Shin Fukae, who boated only one keeper that weighed 1-5. “Today was all about making a dream come true,” Avena said. “I’ve never had a day of fishing that meant more, and I’m so glad it happened the way it did for me.”
The pressure of the moment was so immense that Avena had trouble sleeping Thursday night, and he used that insomnia to his advantage to make some adjustments to a bait that would be the key to his success Friday.
Avena hand-painted a 1 1/2-ounce spoon pink and white at midnight Thursday and rigged it with a size No. 2 Berkley Fusion treble hook. He then used the bait to catch a good limit of spotted bass by 10:30 a.m. Friday. With Fukae struggling, the match was essentially over at that point. “I used basically three techniques this week, and they were all important,” Avena said. “I used a drop shot with a 4-inch hand-poured worm, and I used a longer 2-foot leader because I was fishing for suspended fish. I also used a jerkbait, which served as a great search tool, and then I caught most of my fish today on the spoon.” Swindle also threw several baits to catch his Friday limit of five bass that weighed 11 pounds, 6 ounces — the largest of the day. He caught a 12-ounce keeper just five minutes into the competition on a Rapala DT10 crankbait and then added 1-6 keeper less than an hour later on a buzzbait. For the rest of the day, in cloudy conditions that were ideal for a surface or near-surface bite, he used a jerkbait to fill out his limit. His match was also a bit anticlimactic because his opponent, Arkansas pro Scott Rook, struggled for most of the day. Rook caught just one bass that weighed 1-14. “I used a little bit of everything this week,” Swindle said. “I used a River2Sea spoon, a DT10 crankbait, a jerkbait, a buzzbait and then a shaky head. “The shaky head with a Zoom green pumpkin/blue flake trick worm was probably the biggest bait for me — and most of the fish I caught on it came from 35 to 45 feet of water.” Lane fished all week with larger topwater presentations that produced only a few bites, but larger fish on average. He stuck with that approach Friday and caught a five-bass limit that weighed 10-12. His first keeper was a 2-3 spot that bit a Luck-E-Strike jerkbait at 8:09 a.m. He added a 2-9 on the same lure at 8:58 and a 3-11 at 9:01 during a furious stretch that put his match with fellow Alabama pro Greg Vinson out of reach. Vinson finished with five bass that weighed 5-14. “It all happened on top for me this week,” Lane said. “I switched from a wakebait to a Whopper Plopper and then I really just switched up today to that Luck-E-Strike jerkbait. The name of the game was cover, cover, cover — just cover a lot of water.” One of the key moments for Lane came when he tied into a big fish that actually came unhooked. “That big fish came off and then another one grabbed it,” Lane said. “If I had gotten that fish up next to the boat and then it came off, I might not have had that shot.”
Posted by IBASSIN.COM at 7:30 AM