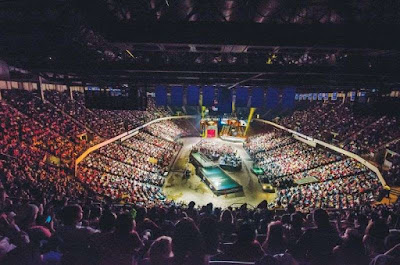 The 50th Bassmaster Classic presented by DICK’S Sporting Goods will come home to its Alabama roots in 2020. The world championship bass tournament will be held in Birmingham, Ala., with fishing competition taking place on Lake Guntersville at Guntersville, Ala., B.A.S.S. announced today.
The iconic fishing tournament will be held March 6-8, with daily weigh-ins and the Classic Outdoors Expo taking place in the Birmingham-Jefferson Convention Complex (BJCC) in downtown Birmingham, B.A.S.S. CEO Bruce Akin said during a press conference Monday afternoon at the BJCC.
“It’s fitting that the golden anniversary Classic be held in Alabama, where B.A.S.S. was founded more than 50 years ago,” Akin said. “Our plans are to make this the most spectacular celebration of bass fishing in history.
“Throughout the current Bassmaster Elite Series tournament season, we are celebrating ‘The Year of the Fan’ — our way of saying ‘thank you’ to the millions of bass fishing fans who make this sport so great. The celebration will culminate in the Classic here in Birmingham.”
The Classic was first held at Lake Mead, Nevada, in October 1971. The tournament was the brainchild of B.A.S.S. founder Ray Scott, who wanted a way to determine an ultimate champion at the end of every tournament season. It has since been held in Alabama 12 times, eight of those in Birmingham.

“We are so proud to once again host the Bassmaster Classic, the Super Bowl of bass fishing,” said Birmingham Mayor Randall L. Woodfin. “We look forward to the great competition the Classic attracts and the dedicated fans who will gather in Birmingham for this incredible event. While in the region, we invite everyone to experience the inspirational history, legendary food and world class entertainment which make us the Magic City.”
“We are thrilled that the Bassmaster Classic will be returning to the Birmingham region once again,” said John Oros, president and CEO of the Greater Birmingham Convention & Visitors Bureau. “This event is the pinnacle of professional bass fishing and it attracts the greatest anglers in the world. The tournament reinforces the fact that the Birmingham area is a great professional and amateur sports destination. We expect that the economic impact of the event will equal or exceed the $32 million spent in hotels, restaurants, attractions and retailers this past year in Knoxville, Tenn.”
Twice previously — in 1976 and 2014 — fishing has taken place on Lake Guntersville, which has become synonymous with bass fishing greatness over the past half-century.
“We are excited that Lake Guntersville has been chosen to be the fishery for this anniversary Classic,” said Katy Norton, president of Marshall County Convention and Visitors Bureau. “The interest the Classic generates has positive impact for months, even years following the tournament, and we expect Lake Guntersville will be at the top of the list for anglers and B.A.S.S. fans to visit following next spring’s competition. We look forward to the tournament and to continuing our partnership with B.A.S.S.”
The inaugural event in Nevada, which was won by Arkansas angler Bobby Murray, featured a 24-angler field and a winner-take-all format with a $10,000 prize. None of the anglers knew the location ahead of time, and they all fished with identical boats and motors.
Much has changed since then — especially the payout, which is now a whopping $1 million for a 53-angler field with $300,000 going to the winner. The winner also adds his name to the most prestigious list in bass fishing.
“The Classic is literally a life-changing event for the angler who wins,” said B.A.S.S. Director Chase Anderson. “It exemplifies what Bassmaster competition stands for: ‘Big Bass. Big Stage. Big Dreams.’ It honors the angler who can catch the biggest bass of the week, and weigh them on the biggest stage in bass fishing, and fulfill the biggest dream any angler can have. No title in professional fishing holds the same clout as ‘Classic champion.’”
It’s hard to imagine a more fitting spot for the 50th renewal of the event than Lake Guntersville, which has hosted 22 major B.A.S.S. events.
The 68,000-acre Tennessee River fishery, which is a popular destination for bass fishing enthusiasts from across the country, will also play host to a regular-season Bassmaster Elite Series tournament June 21-24. That 23rd major B.A.S.S. event will make Guntersville the second-most visited lake in B.A.S.S. history, behind only Sam Rayburn Reservoir in Texas.
Weigh-ins and the Classic Expo will be held 75 miles away at the BJCC — and recent history says they’ll be plenty busy.The 2018 Classic attracted 143,323 fans to all activities, including the Get Hooked on Fishing activity center, morning takeoffs, weigh-ins and the Expo. That was an all-time record until this year’s event on the Tennessee River in Knoxville drew 153,809.
The Classic will be covered live and streamed on Bassmaster.com, ESPN3 and the ESPN App, and five hours of original programming will be aired on ESPN2 and the Pursuit Channel following the event. In addition, the Classic annually draws more than 250 credentialed media. The 2019 Classic was covered by journalists from 28 states as well as Japan, China, Australia, Italy, Germany and Canada.
Posted by IBASSIN.COM at 2:00 AM