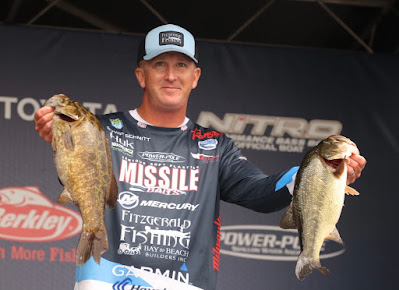 Bryan Schmitt, of Deale, Md., is leading after Day 2 of the 2021 Guaranteed Rate Bassmaster Elite at Lake Champlain with a two-day total of 43 pounds. (Photo: BASS)

Bryan Schmitt has insisted two days in a row that big smallmouth will be the key this week if he wins the Guaranteed Rate Bassmaster Elite at Lake Champlain.

The second-year Elite Series pro from Deale, Md., caught a five-bass limit Friday that weighed 21 pounds, 5 ounces and moved from second place into the lead with a two-day total of 43-0.

Once again, his bag was anchored by a big largemouth — this time a 4-15.

“I’ve burnt my largies down,” Schmitt said. “I got some lucky bites today. They happened on some places that I like fishing, but I know they were lucky bites.”

One of those lucky bites came late in the day and helped him upgrade into the lead.

“I pulled up on a spot this afternoon and made a cast with a spybait,” he said. “As I was reeling it in, something boiled out beside me and a baitfish jumped out of the water. I cast over there and caught a 4-pound smallmouth.

“That, to me, is very lucky. Little things like that have been happening for me this week.”

The Virginia pro and founder of Missile Baits gave Schmitt a “goody bag” that was filled with Quiver Worms in the green pumpkin flash color. Schmitt said both species have been eating the worms when conditions will allow.

The smallmouth he expected to rely on Friday let him down, partly because of wind that blew much harder than it did on Thursday.

“My spot that I caught three big smallmouth off of yesterday, it was very rough and I couldn’t fish it the way I wanted to,” he said. “I still saw them on my (Garmin) LiveScope, but I just couldn’t do it right.

“Tomorrow, if it’s calm, I’m really going to have to make that happen.”

Like every angler in the field, Schmitt is also hoping for more sunshine during Saturday’s semifinal round. He said it would play a big role in making both species of bass more predictable.

“Sunlight and shade position my largemouth,” he said. “These big isolated clumps that I’m fishing, they’re going to be on them instead of roaming all around. It can maybe be better, but we don’t know.

“I've really got to catch some smallmouth tomorrow to keep it going.”

Schmitt can’t afford to slip with Pennsylvania pro Destin DeMarion just behind him in second with 40-8 and Texas pro Chris Zaldain in third with 40-6. Another Texas pro, Lee Livesay, is fourth with 40-5, while Canadian Jeff Gustafson is fifth with 40-0.

DeMarion, who caught 19-6 despite technical difficulties Thursday, got things straightened out and added 21-2 to his total Friday.

“I started where I caught my biggest largemouth yesterday and didn’t really do anything,” DeMarion said. “I started running some other stuff and ended up catching my biggest fish of the day right after I left that spot. I was pretty pumped.”

Though it was his second choice, the spot produced a solid limit of 17 pounds. Then as DeMarion was running new water, he caught enough big largemouth to cull up to his final mark of 21-2.

His bag included three smallmouth in the 4-pound range, one near 3 1/4 and a 5-pound largemouth.

“It was a blast,” he said. “A lot of people are starting with smallmouth and moving in when they see a good spot for largemouth. But I’m kind of bucking the trend and fishing for largemouth first. Then I’m using smallmouth to cull out the smaller largemouth.”

After noticing smallmouth were feeding on giant alewives, Zaldain has been using two of the baits he’s always most dangerous with — a big swimbait and a flutter spoon. They helped him 20-11 Thursday and 19-11 Friday.

“On the third day of practice, I realized they were keyed in on some really big baitfish — and that perked me up,” Zaldain said. “It’s kind of the same thing as Southern swimbait fishing when they’re keyed in on big gizzard shad. It’s the same thing up here with them eating 6- and 7-inch alewives.”

Zaldain said the bass he’s catching aren’t relating to structure. Instead, they’re roaming around chasing baitfish, and he’s using his electronics — plus the tell-tale signs of nature — to stay near them.

“I’ve got waypoints dropped on them, but they’re dropped more for the area than they are for a specific rock or a boulder,” he said. “I see birds working. I see signs of baitfish busting.

“That’s where my waypoints are, but the fish are never in the same area twice.”

The Phoenix Boats Big Bass of the day, a 5-11 largemouth, was caught by Minnesota pro Seth Feider. With a Friday bag of 19-7 Friday, Feider is now in sixth place with a two-day total of 39-2.

With 697 points, Feider now holds a solid lead in the race for Bassmaster Angler of the Year over South Carolina pro Patrick Walters (640) and Oklahoma pro Jason Christie (628). Christie suffered a 2-pound penalty Friday for making a cast with six bass in his livewell.

Feider said he believes he might be one good day away from locking up the title.

“I think if I can catch 19 or 20 pounds tomorrow, it’ll just about be done,” he said. “If I can do that, I think it would take a breakdown or a disqualification or something like that the rest of the way to keep it from happening.

The Top 45 remaining anglers will resume competition Saturday with takeoff scheduled for 7 a.m. ET from Plattsburgh City Marina. Weigh-in will be held back at the marina at 3 p.m.

After Saturday’s round, only the Top 10 pros will advance to Championship Sunday with a chance at the $100,000 first-place prize.