Classic Returns to Knoxville Tennessee in 2023!

Bassmaster Classic Heads Back To Knoxville And Tennessee River In 2023 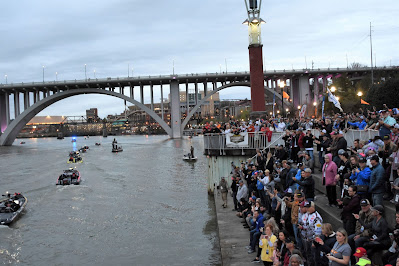 BIRMINGHAM, Ala. — The venue that was home to one of the most successful and well-received Classics of all-time will once again be the host for professional bass fishing’s biggest celebration in 2023.

B.A.S.S. officials announced today that the 2023 Academy Sports + Outdoors Bassmaster Classic presented by Huk will be held in Knoxville, Tenn., March 24-26 with competition on the Tennessee River lakes of Fort Loudoun and Tellico. Daily weigh-ins will be held at Thompson-Boling Arena — the palatial 20,000-seat venue on the University of Tennessee campus — and the annual Bassmaster Classic Outdoors Expo will take place at the Knoxville Convention Center and the adjacent World’s Fair Exhibition Hall.

The Visit Knoxville Sports Commission will once again serve as host.

“Our first Bassmaster Classic in Knoxville produced record-breaking fan attendance and was one of the best Classics we’ve ever had,” said B.A.S.S. CEO Chase Anderson. “The Bassmaster Classic is the Super Bowl of Professional Bass Fishing. It’s not just a great competition; it is a true celebration of the competitors, the fans and the sport as a whole.

“We couldn’t be more thrilled to be headed back to Knoxville.”

With daily takeoffs from Volunteer Landing, located downtown at the head of the beautiful Tennessee River, the 2019 Classic drew a record crowd of 153,809 spectators and generated an economic impact of $32.2 million for Knoxville and East Tennessee, according to a report released by the Visit Knoxville Sports Commission.

“We are thrilled to welcome B.A.S.S. back to Knoxville and East Tennessee,” said Chad Culver, Senior Director of the Visit Knoxville Sports Commission. “This will be their fourth major event hosted in Knoxville, (with Elite Series events in 2017 and 2021, and the Classic in 2019). With Knoxville having the distinction of their highest-attended Classic to date, we look forward to an exciting, record-breaking 2023 Classic.”

According to the same study, the Classic provided a direct economic impact of $17.7 million and an indirect boost in business sales of $14.5 million. The event generated $2.75 million in state and local tax revenue, including taxes on sales, restaurant purchases and lodging. Classic attendees, who traveled to Knoxville from almost every state and foreign countries as far away as Australia, Japan and Italy, paid for 29,232 room nights in local hotels.

The event was recognized as a 2019 Champion of Economic Impact in Sports Tourism (Mid-Market Division) by Sports Destination Management. Won by Tennessee native Ott DeFoe, the tournament was the first major B.A.S.S. event held on Fort Loudoun and Tellico lakes, but it spawned a relationship that is still flourishing today.

While a previous event visited Cherokee Lake, the Bassmaster Elite Series — the top circuit in professional bass fishing — made its first trip to Fort Loudoun and Tellico in Knoxville in 2021. Canadian pro Jeff Gustafson won that event with a four-day weight of 63 pounds.

Now, Knoxville will join the prestigious list of cities that have hosted multiple Classics.

“We’re honored to host B.A.S.S. for the fourth time in seven years,” said Kim Bumpas, President of Visit Knoxville. “We are proud of the continued successful partnership between B.A.S.S., our own Visit Knoxville Sports Commission, the Tennessee Department of Tourist Development, and Knox County and the City of Knoxville.”

In just two events, Fort Loudoun and Tellico have shown what a full buffet they offer to bass anglers.

DeFoe won his 2019 Classic title in mid-March with largemouth bass. Then in late February 2021, Gustafson relied largely on one magic spot for daily bags of smallmouth. During that same event, anglers like Steve Kennedy, John Cox and Brandon Card pushed Gustafson hard with largemouth.

Though the 2023 Classic will be later in the year than either of those events, both species are still likely to come into play.

“That’s one of the things that makes this venue so interesting — just the variety of species and patterns that anglers have available to them,” said Chris Bowes, B.A.S.S. Vice President of Tournaments. “You could see someone win it with all largemouth, all smallmouth or a mixed bag of the two. That always makes for a great event.”

Fort Loudoun and Tellico lakes are twin reservoirs that cover about 30,000 acres. With the lakes connected by a canal, Classic competitors will be allowed to fish both. They’ll also find good fishing along the Tennessee River upstream from Fort Loudoun Dam to the Interstate 40 bridge on the Holston River and the Highway 168 bridge on the French Broad River.

The field will include 55 anglers who will qualify through the Bassmaster Elite Series, the St. Croix Bassmaster Opens, the TNT Fireworks B.A.S.S. Nation Championship, the Strike King College Series presented by Bass Pro Shops and the Bassmaster Team Championship. They’ll all be vying for a $300,000 first-place prize and a total purse of over $1 million.

“Knoxville has every element necessary for an incredible Classic,” Anderson said. “It is a great sports town, in general, and bass fishing is incredibly popular in East Tennessee. There will be a lot of local interest in the event, and people who are visiting Knoxville for the first time are likely to keep coming back because the city and East Tennessee have so much to offer.”

Email ThisBlogThis!Share to TwitterShare to FacebookShare to Pinterest
Labels: Classic Returns to Knoxville Tennessee in 2023!