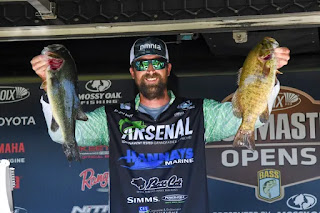 Anchoring his bag with a 4-13 smallmouth, Mittelstaedt leads Kyoya Fujita of Minamitsuru, Yamanashi, Japan, by 4 ounces. After a slow start yielded a few small bass, Mittelstaedt dialed in the pattern that produced all of his weight.

“The conditions today played into my favor, and it all just came together,” Mittelstaedt said of the day’s sunny skies and light to moderate wind. “I have to give a shoutout to my co-angler (Mickey Soler). He figured out the bait and I had the spots, and the combination of the two really came together nicely.

“It was standard finesse fishing, but it was playing the conditions. I fish shallow a lot in Minnesota, so I was just doing what the day indicated. This is my third time on Oneida, and I think this is the first time I’ve fished in less than 8 feet.”

As Mittelstaedt explained, he has found that Northern smallmouth will often push onto the shallow shoals when conditions become calm and clear. Likely related to the spawn, but also a feeding convenience move, this relocation makes them easier to find.

“I had a completely different game plan going into practice, but when I saw the weather forecast for this week, I ended up looking shallow and finding some fish,” he said. “These sunny, calm days really make it good for shallow smallmouth fishing, so I stuck with that.”

Even with the bright sun and clear, shallow water, Mittelstaedt said he only saw about half of his fish.

“It was a combination of (sight fishing and blind casting),” he said. “I caught a couple of my better ones visually fishing for them. My co-angler caught a really nice one too and he was just blind casting.”

Mittelstaedt said he had his limit by about noon and then made some significant upgrades later in the day. His bag also included a chunky largemouth that he never saw coming.

“That largemouth was a total fluke,” he said. “I had seen three smallmouth on the spot where I caught it, and when it bit, I thought I had a smallmouth at first. But then it started running with it and I was like, ‘This isn’t acting like a smallmouth.’

“The smallmouth were gone (from that spot) and the largemouth was there. It was definitely a lucky bite.”

Looking ahead, Mittelstaedt said he’d be content with another shallow day, but he’s keeping his options open.

“I’m not sure if I’m going to be able to do it again tomorrow, but I have plenty of offshore stuff to go to,” he said.

Fujita, who finished tenth earlier this year in the St. Croix Bassmaster Northern Open on the James River presented by Mossy Oak Fishing — his Opens debut — is in second place with 20-3. Reporting a very busy day, Fujita said he caught approximately 30 fish.

Working offshore humps in 9 to 12 feet of water, Fujita caught all of his bass on a drop shot with a 3 1/2-inch green pumpkin straight-tail worm.

“I was using my Garmin LiveScope to see the fish and make precise casts to the spots,” Fujita said. “I fished (multiple spots) and I was fishing around each one.”

Italy’s Jacopo Gallelli is in third place with 19-14. The first pro to weigh in, Gallelli’s fish care concern brought him back to Oneida Shores Park prior to the official 2 p.m. check-in time.

“I caught fish throughout the day,” Gallelli said. “I didn’t catch many fish; I just caught the right ones.”