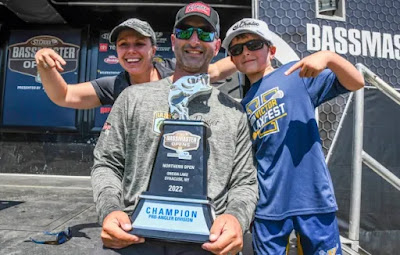 SYRACUSE, N.Y. — Returning to a favorite family spot, Casey Smith of Victor, N.Y., found the quality bites he needed to win the St. Croix Bassmaster Northern Open at Oneida Lake presented by Mossy Oak Fishing with a three-day total of 55-13.

A solid start gave Smith a Day 1 limit of 18-7 that put him in sixth place. He took over the lead with a second-round bag that went 18-12 and after sacking up a Day 3 limit of 18-10, he closed the door with a 2-pound winning margin over his fishing pal Liam Blake of Syracuse, N.Y.

Smith won the first-place prize of $52,300 and qualified for the 2023 Academy Sports + Outdoors Bassmaster Classic presented by Huk to be held in Knoxville, Tenn., March 24-26. Bassmaster Opens anglers are Classic eligible if they commit to fishing all three events of the division in which they win.

“I kinda forgot about the Classic; it hit me last night while I was rigging tackle,” Smith admitted. “The priority was winning at home in front of my people. I won a major event on another tour about six years ago, but I wanted to win that trophy at home.”

Smith recalled struggling with a slow morning and midday until moving to a spot that made sense from a fishing perspective but also held deep sentimental value. The Billington Bay shoal with about 3 feet on top and 12 on the sides was the spot where Smith and his wife Tiffany fished seven years ago when they were expecting their son Travis.

Last year, the family spent their Independence Day week in the area and fished the same spot. Today, that bar delivered epic serendipity.

“My son had a lacrosse game in Sackets Harbor (about an hour north) and when they came out and started watching me around 11:30, I had four fish,” Smith said. “I caught everything I weighed in on that high spot with them right in front of me.

“I culled out everything I had on that same bar where we fished when my wife was pregnant with my son. That was a special moment catching giants.”

On this high spot, Smith targeted a variety of irregularities including transitions of rock to sand, rock to grass, rock spines, depressions and rock drops.

“Every cast I made was to the highest-percentage zone I could see on my screen,” Smith said. “I couldn’t have done it without Humminbird 360. I was constantly casting at some type of irregularity. I just stayed far away from them and targeted where they sit and live.”

Throughout the tournament, Smith mentioned using standard smallmouth bass finesse techniques. That included 1/5- and 1/4-ounce Ned heads with a ZMan Finessed TRD in green goby, a 4-inch green pumpkin tube on a 1/2-ounce jighead and a drop shot with Berkley PowerBait MaxScent Flatworm in brown back.

“(Local knowledge) really helped me this week; I was able to run a bunch of different areas and make a bunch of specific casts,” the hometown angler said. “Today was a lot tougher — I only had six bites all day, but they were bigger ones.”

Blake caught his fish on a 1/8-ounce black hair jig, a drop shot with a 4-inch green pumpkin Yamamoto Senko and a 1/2-ounce football jig with a Strike King Rage Craw.

“I rotated through 12 to 15 spots a day and I would keep coming back to the (better) ones and hope that the fish would filter back in there,” Blake said.

Gallant, who won the St. Croix Bassmaster Southern Open on Cherokee Lake presented by Mossy Oak Fishing on April 2, did most of his work on a main-lake flat with clumps of grass in 12 feet. He amassed his weight by pitching a drop shot with an XZone Lures Hotshot Minnow to bass he spotted on his Garmin LiveScope.

“Practice was super up and down, so to come in here and get a Top 10, that was my goal,” Gallant said. “I caught them on the same bait I used on Cherokee. I was LiveScoping and dropping it on their heads.”

Kimura of Hirakata Osaka, Japan, leads the Northern Open standings with 394 points. Alex Wetherell of Middletown, Conn., is second with 388, followed by Kyoya Fujita of Minamitsuru, Yamanashi, Japan, with 376, Cody Meyer of Eagle, Idaho, with 371 and Elite pro Michael Iaconelli of Pittsgrove, N.J., with 365.

The tournament was hosted by Visit Syracuse and Onondaga County Parks.