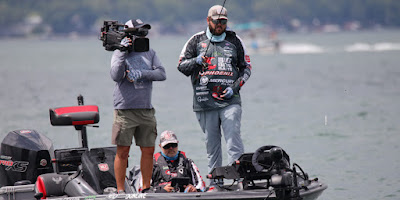 UNION SPRINGS, N.Y. – Following a spectacular kickoff Saturday to the Fox Rent A Car Stage Six Presented by Googan Baits on Cayuga Lake yesterday, Day 2’s results – while still excellent – almost seemed like a breather. That’s how good Cayuga Lake is, where five anglers over the 70-pound mark on the second day means slightly slower action than the day prior.

No matter how you analyze it, the numbers say that Cayuga is showing out.

The action was consistent on Day 2, with plump largemouth and smallmouth steadily ringing up SCORETRACKER® throughout all three periods and red hot Michael Neal taking the lead after catching 21 bass for 83-3.

Fresh off his second consecutive Angler of the Year title on the Tackle Warehouse Pro Circuit, Neal is back in contention for another win. Beside Wheeler, nobody has been able to consistently shine and find themselves at the top of the standings across varied fisheries as much as Neal has in the past few years. Sunday was just another example of that and Neal will carry a nearly 8-pound lead over second place angler Mark Daniels, Jr. going into their group’s next fishing day on Tuesday.

Neal finds himself at the top doing something right in his wheelhouse – fishing offshore and utilizing his electronics. His success Sunday came after an early morning adjustment.

“I started fishing some shallow grass with some holes in it, but never got a bite,” Neal said. “When that didn’t pan out, I went to my deeper stuff and immediately caught fish. I saw as many or more as I did in practice on my electronics, but the area is getting a lot of pressure, so I don’t know how it’ll hold up.”

Even with the lead, Neal is unsure of how strong his areas are, and that he has no additional tricks up his sleeves.

“I hit everything I had today, absolutely everything I found in practice,” Neal admitted. “It’s hard to say if they’re coming or leaving my areas and it’s all about timing. There are big groups out there; if you only see one or two on your graph, you might catch one, but when you see groups of eight or 10 bass, they’ll bite immediately. Then you’ll catch multiple fish in a row. It’s all about running into the bigger groups when they are feeding.”

Daniels and Ehrler Surprised By Results

Everyone thought Cayuga Lake had the potential for some monster stringers, but just about everyone was surprised by how good it would be. Daniels and Brent Ehrler were among that group, as both were in disbelief about their days after how their individual practices went.

“I feel great about today and it was much better than I anticipated based on the practice I had,” Daniels said. “I have one really good area, and I camped there and milked it for all it’s worth. I left for an hour and didn’t catch any and when I returned, I caught some more. Looking back, I probably should have stuck it out for the whole day.”

Ehrler had a similar sentiment based on his practice versus his results.

“It was a lot better than I thought,” he said. “The first day of practice, I caught five and the next day was 10 bass, so I was pleasantly surprised with how the day went. I was not expecting that.”

Daniels and Ehrler are chasing Neal for the automatic qualifying spot in the Championship Round and will give him a run when they return to the water.

“I like the area I have, but I don’t know how many fish are there,” Ehrler said. “I’ll start there and if I get too far behind the lead, I’m going to stop catching them and just do enough to make the Knockout Round.”

Daniels believes his area has the potential to help him with the group, but he’s wary of the fishing pressure that it’s receiving.

“I’ll start there and see how the morning goes,” he said. “But, I need to find more groups of fish like I have there because it’s getting so much pressure.”

The Fox Rent A Car Stage Six Presented by Googan Baits continues on Monday as Group A returns to the lake, with half of the anglers advancing on to the Knockout Round and the rest heading home. The group is headlined by Lucas, who holds a 19-2 lead over Wheeler after their first qualifying day on Saturday.

Wheeler is the current leader in the Bally Bet Angler of the Year race and looks to continue his streak of making the Top 10 at every regular-season event this year. Fans can watch Group A battle it out on MLF NOW! beginning at 7:45 a.m. ET.