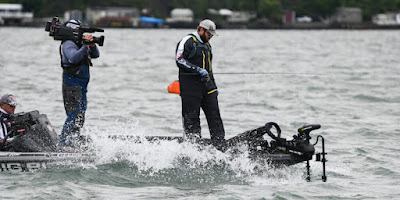 UNION SPRINGS, N.Y. – We’re running out of superlatives to describe the excellent fishing at the Fox Rent A Car Stage Six Presented by Googan Baits. The sheer number of quality bass that Cayuga Lake is kicking out is staggering, and Wednesday’s Knockout Round has the potential to be one of the best ever as anglers from both competition groups appear to have the bite dialed in.

The top eight anglers in Wednesday’s Knockout Round will join Group A winner Justin Lucas and today’s victor Michael Neal, who won Tuesday’s Qualifying Round after tacking on 56 pounds, 8 ounces, bringing his two-day total to 139-11.

Neal and Lucas just finished another battle on the Tackle Warehouse Pro Circuit, with Neal taking home the Angler of the Year title and Lucas finishing second in the race when the season finished up on Lake Champlain. Now, they’ll go another round a few hours away from Champlain.

This will be one of many intriguing storylines to watch as the event concludes on Thursday. But, there’s still plenty of fun left with the Knockout Round tomorrow set to host the top anglers from each group.

Neal Cruises into Championship Round

As he’s done with regularity lately, Neal will be fishing on the final day. While the results show that he comfortably beat the rest of the group, that wasn’t the whole story. Mark Davis and Alton Jones made big runs and made it close for Neal. But, in the end, Neal won the group by 11-12 over Davis in second.

Neal stepped on the gas midday and never looked back. He led coming into Tuesday and again caught the most weight on the day, earning the automatic bid to the Championship Round after catching 14 bass for 56-8. Neal felt the pressure and caught them until the waning moments of the day, even though he would’ve preferred to take it easy on his fish.

“I feel like I was probably catching too many that would help me when I come back out there,” he said. “It was just too close for me to let up the way they were catching them. I hoped to get a big lead and start to look for more areas, but it may be a good thing I didn’t. There’s not much more to find in this area and if I found more stuff, I might get spread too thin with too many options.”

With a day off tomorrow, Neal has time to formulate a plan, but he knows exactly where he’ll be to start the day.

“There’s a ton of pressure in my areas, but when you find them, they’re schooled up and bite right away,” he said. “I’ll take tomorrow to regroup and get a better game plan for the Championship Round.”

Montgomery, Elias Rally to Knockout Round

Elias has had a tough go on the Bass Pro Tour, but scored another Knockout Round appearance this week with a great day today. He caught 16 bass for 42-10 to jump 10 spots and into safety. Elias built a large cushion in the afternoon, but it got a little too close for comfort late in the day as the cut weight got closer and closer.

“I had a 12-pound cushion and somehow managed to make it close,” Elias said. “Praise the Lord that I made it. I can’t wait to get back out here tomorrow, and I hope the fish are on my areas again like they were today. The first day got to me with how few I was able to catch.”

The Fox Rent A Car Stage Six Presented by Googan Baits moves on to tomorrow’s Knockout Round. The 38 remaining anglers will fight it out for the eight more spots that will join Justin Lucas and Michael Neal in the Championship Round. Fans can watch all the action on MLF NOW! beginning at 7:45 a.m. ET.