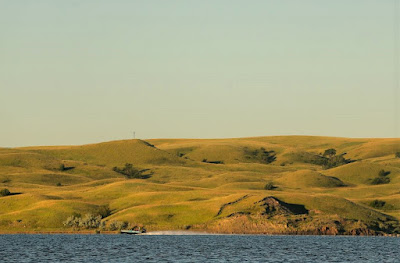 Now, as 91 professional anglers prepare for the 2022 Guaranteed Rate Bassmaster Elite at Lake Oahe on Aug. 18-21, Diede said he wouldn’t be surprised if his record is given a run for its money.

“It is definitely possible. It wouldn’t surprise me one bit,” said Diede, a B.A.S.S. Nation regular who qualified for the 2015 Bassmaster Classic. “I’m honestly surprised no one has caught one bigger yet. Oahe has giant fish in it and both Lake Sharpe and Lake Francis Case (two other premier South Dakota fisheries) have giant smallies in them too.

“It is only a matter of time before someone catches an 8-pound-plus fish. It is going to happen. The fisheries are all pretty healthy right now.”

Anglers will take off from Indian Creek Recreation Area at 7 a.m. CT each day while weigh-ins will be held on Park Blvd., near the Walleye Up Statue in Mobridge starting at 3 p.m. The field will be cut to the Top 47 anglers after the Day 2 weigh-in, and the Top 10 will compete on Championship Sunday for a first-place prize of $100,000.

This will be the second trip to the massive 231-mile-long impoundment for the Elite Series. During the first visit to Lake Oahe in June 2018, Mark Daniels Jr. won with 69 pounds, 9 ounces.

This time around, the Elites will face off against smallmouth bass that are in a full summer pattern on a venue that is lower than normal. Even still, Diede expects quality smallmouth to be caught throughout and bags to exceed the 20-pound mark. Largemouth may also be caught, but they are hard to pattern and he doesn’t expect them to factor into a winning bag.

“We are down about 10 to 12 feet right now,” Diede said. “The river is coming back up. This is the first drawdown we’ve had in a while. It is mainly due to the Montana snowmelt. There hasn’t been a lot of snowmelt and water coming into the basin. So, there are a lot of spots that are high and dry right now.

“It has challenged everyone to dig for some new stuff this year. Where you would normally be fishing, you might be another 50 yards farther (toward the main river).”

Lake Oahe has a slow-moving current and largely features rocks, boulders and hard structures, but the most productive areas for smallmouth tend to be long, tapering points. While much of it is out of the water, there are also willow bushes, and standing timber is featured in isolated sections of the river.

“They will hunker down on the ends of points and they will bunch up and sit there in 18 to 30 feet of water. That is kind of the sweet spot,” Diede said. “That’s where a lot of the fish summer. They will hold to those areas and they will wander from there. Guys are going to have to find four or five of those spots and try to milk them.”

While structure will be an important aspect, the presence of bait will also play an important role. The lake features large cisco (or lake herring), shad and rainbow smelt. Diede said the bass will eat all three types of bait — and with an abundance of bait, topwater lures like Spooks and poppers will come into play.

“Right now, we have a lot of roamers,” Diede said. “It is kind of like chasing ghosts out there. A lot of those fish that are chasing can be quality fish. You might only get six bites, but five of those bites might be the right ones.”

While this year's tournament is taking off farther north than in the 2018 season, Diede predicts many of the same areas that produced big bags in 2018 will again play. Expect some anglers to stay near the bridges around Mobridge and the Moreau River while others will run south to places like the Whitlock Bay area, the Highway 212 bridge, Sutton Bay and even the Cheyenne River.

Typical smallmouth catchers like drop shots and Ned rigs will produce, and Diede added things like magnum tubes, crankbaits, spybaits, tail spinners and some larger baits will come into play.

The X factor will be the wind. If relatively calm conditions are present, Diede estimates the VMC Monster Bag of the tournament could exceed 22 pounds. If the wind blows hard from the south, and with no trees to block the onslaught, the lake can get rough in a hurry and fishing could become extremely difficult.

Even areas that seem protected could end up being affected.

“The wind just has so much room to build,” he said. “It’s not like another lake where you have a shoreline within a couple miles of you. The way the terrain is around the river, it directs and guides the wind in different directions.”

Wisconsin pro Jay Przekurat sits atop the Falcon Rods Bassmaster Rookie of the Year race with 455 points. He is followed closely by Tennessee pro Jacob Foutz who sits in second with 444 points, while Missouri pro Cody Huff is third with 388 points.

Full coverage from all four days at Lake Oahe will be available on Bassmaster.com and the FOX Sports digital platforms. FS1 will also broadcast live with the tournament leaders on Saturday and Sunday, August 20-21 beginning at 7 a.m. CT.

Omnia Fishing and B.A.S.S. have also partnered to simulcast Bassmaster LIVE as a shoppable stream on Omnia’s website and mobile app for Days 1 and 2 of the event.

The Mobridge Chamber of Commerce is hosting the tournament.