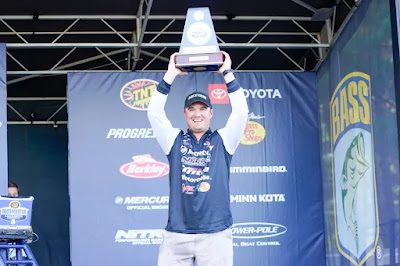 FLORENCE, Ala. — Will Davis, Jr. said earlier this week that despite difficult fishing on

Pickwick Lake, the TNT Fireworks B.A.S.S. Nation Championship was setting up well for him.

Boy, was he right.

Davis, a 30-year-old from Sylacauga, Ala., caught a tournament-best limit of 16-12 during Friday’s final round, including the Big Bass of the tournament – a 5-4 whopper of a smallmouth that anchored his haul — to finish with a three-day total of 43 pounds, 8 ounces and seize a come-from-behind victory at McFarland Park.

“I’m very tired,” Davis said, minutes after hoisting the Bryan J. Kerchal Memorial Trophy and being joined on the Bassmaster stage by family and friends for a joyful, and tearful, celebration.

“I knew this was going to be an absolute grind — and it absolutely was.”

Davis was in second place after both Days 1 and 2, with limits of 13-13 and 12-15 — and on paper, it appeared those catches were effortless. But Pickwick was stingy throughout the week. So tough, that Davis caught only 16 keepers in three days.

He weighed 15 of them, though, making him the only angler in the field of 114 to catch a limit each day.

The work was well worth it. Davis collected a $20,000 cash prize, as well as an invitation to the 2023 Bassmaster Elite Series, including the use of a fully-rigged Nation’s Best boat for the year.

The true prize, however, is a berth in the 2023 Academy Sports + Outdoors Bassmaster Classic, which will be held March 24-26 on the Tennessee River in Knoxville, Tenn.

Wil Dieffenbauch of Morgantown, W. Va., and Jonathan Dietz of Corry, Penn., also won Classic berths after finishing second and third, respectively, at Pickwick. Dieffenbauch weighed a three-day total of 13 bass for 37-5 and Dietz weighed 14 for 33-7.

Worthy efforts, for sure, but Day 3 belonged to Davis.

Overnight rain meant the U.S. Army Corps of Engineers was pulling more current at the Wilson Dam, where he fished the tailrace all week. That’s exactly how Davis grew up fishing on the nearby Coosa River, and that experience paid major dividends.

Four of Davis’ five bass on Friday came on a Davis Bait Company 1/2-ounce Shaky Fish jig with an XSwim Slim Minnow (albino with chartreuse tail). It’s his go-to lure, one his dad (and best friend) Will Davis, Sr. created and markets online and through retail outlets.

“Without my dad, I wouldn’t be in this position, and I wouldn’t have this trophy,” Davis Jr. said, cradling the hardware named for Kerchal — the only angler to ever qualify for the Classic through the B.A.S.S. Nation and then win the sport’s biggest tournament.

“(My dad) has put me in a boat since I was in high school. I can’t tell you how much money I’ve won on his baits. He spent all last week in his shop making these for me.”

Still, the younger Davis had to do the heavy lifting on Pickwick. He fished in 3 to 5 feet of water throughout the event, casting repeatedly — “washing my lures in the current,” he said. One of Friday’s bass came on a 3/8-ounce XWire spinnerbait (Gold Colorado/Willow combo) with a Zoom Bait Company Twin Tail trailer.

Dieffenbauch led after the first two weigh-ins but dropped to second Friday after catching three bass for 7-15. He lost two hours of fishing time after experiencing boat troubles, but he already was scrambling by that time.

“The first spot I pulled up on, there was a local boat on it,” the 33-year-old angler said. “I made a gamble and ran down to Second Creek knowing there were a lot of fish down there. I was hoping to catch them on a topwater in the rainy conditions … but I spun my prop.”

It was a disappointing finish, but making the Classic helped Dieffenbauch realize a lifelong dream.

“It hasn’t sunk in yet,” he said. “Knoxville hasn’t been too kind to me in the past, but hopefully we can change that in a few months.”

As part of the Yamaha Power Pay program, Dieffenbauch took home an additional $5,000.