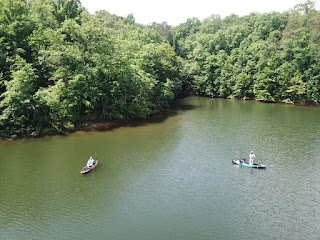 BIRMINGHAM, Ala. — After crowning its first Angler of the Year in 2022, the Yamaha Rightwaters Bassmaster Kayak Series powered by TourneyX now has its much-anticipated five-tournament regular-season schedule in place. New for 2023, every tournament will feature two days of competition.

“It’s been really fun to watch anglers enjoy this trail as the sport — and our trail — continues to evolve and grow,” said B.A.S.S. Vice President of Tournaments Chris Bowes. “We value the feedback of anglers who are traveling from across the country to fish with B.A.S.S., and the two-day events we experimented with last season were extremely well-received.

“We’re excited to offer expanded competition on some iconic lakes. The 2023 season will showcase fisheries where the Kayak Series has already made history as well as some exciting new waters.”

The 2023 schedule begins on one of the sport’s most iconic fisheries when the field takes on Lake Guntersville in Scottsboro, Ala., March 4-5. While Lake Guntersville has hosted three Bassmaster Classics and numerous major B.A.S.S. tournaments, this will be the first time that a Kayak Series event has been held on the “Big G.”

The country’s best kayak anglers — including 2022 Bassmaster Kayak Series Angler of the Year Drew Gregory — will compete for a National Championship on legendary Chickamauga Lake in Dayton, Tenn., March 22-23 as part of festivities surrounding the 2023 Academy Sports + Outdoors Bassmaster Classic in Knoxville. Chickamauga last hosted the Bassmaster Kayak Series in 2020. The winner of the season-ending tournament was Iowa’s Tyler Cole, with five bass measuring 89.5 inches. The big bass of that event was a largemouth coming in at a whopping 23 inches.

After the Championship in Tennessee, the Kayak Series heads to Anderson, S.C., to do battle on Lake Hartwell April 15-16.

“We’re very excited to add the Bassmaster Kayak Series to the myriad of Bassmaster events that we have hosted in Anderson County and Lake Hartwell,” said Neil Paul, executive director of Visit Anderson. “The kayak community is growing and very important to our area, and we look forward to showing our hospitality to the kayak community. B.A.S.S. has long served as the leader in competitive bass fishing and I have no doubts that the Kayak Series will be conducted in a first-class manner.”