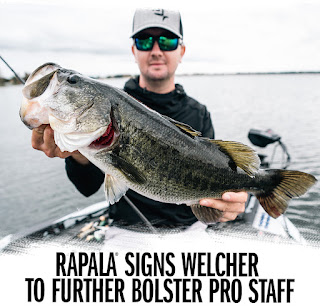 Rapala, a legendary company already in possession of the industry’s most accomplished and diverse set of pro-staffers, announces the addition of Bassmaster Elite Series pro Kyle Welcher.

Welcher joins a team that includes past Bassmaster Anglers of the Year such as Gerald Swindle, Davy Hite, Mike Iaconelli and Seth Feider, as well as Bassmaster Classic winner Ott DeFoe, and Jacob Wheeler, generally considered to be the hottest bass angler on the planet right now.

Welcher is particularly excited to offer his R&D ideas and to swap information with his fellow pros. “We’re going to talk through things and it’ll be a team effort,” he explained. “Most of us are on the same page about the value of Rapala’s high quality, even if we have our own styles on the water.

About Kyle Welcher
As he enters his fifth season in the Elite Series, Kyle Welcher has quickly established himself as one of the top up-and-coming pros anywhere, with two Bassmaster Classic appearances under his belt. The Alabama pro, who will turn 30 this February, was the runner-up in the “Super Bowl of Bass Fishing” in 2022. Perhaps more impressively, he’s finished in the money in 27 of 34 B.A.S.S. events, just under 80 percent. A lot of those checks have been earned on the back of Rapala products.