Springfield, Mo. resident Gerald Fleming is the current owner of the first Bass Cat boat ever produced, and it still sits on its original trailer and carries its original motor (you can click on the photos to see larger versions). Therefore, the 50-year-old Fleming will be allowed to trade it all in for a new Bass Cat Margay, a new Mercury 115 Pro XS motor and a new Margay 4-inch frame trailer, as per the Cat Hunt promotion that launched in mid-December. 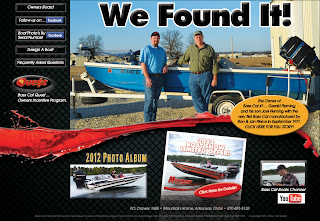 Fleming said he purchased the boat, stamped with serial number 00801, from a private party several years ago. It'll now be restored and eventually put on display at Bass Cat headquarters in Mountain Home, Ark.

"We have two original carpet rolls of the old felt-style indoor/outdoor carpeting that I've kept tucked away almost 40 years for this occasion," said Bass Cat owner Rick Pierce. "Around 1972, everything went to the AstroTurf style and this was before that."


The company had lost track of the boat – which Bass Cat founder Ron Pierce (Rick's father) had run himself for a couple of years after it came off the line – more than a decade ago.

"We thought it was gone," Ron Pierce said. "The last we heard, we were told it was burned in a barn fire in Indiana. I can't believe it has the original engine. We are very glad to get it back."

Fleming learned about the promotion from his 23-year-old son, Joel, who'd recently taken possession of the boat and had gone to the Bass Cat website in search of tips for winterizing it. The Flemings were actually thinking about selling it this spring, so now they're extremely glad the promotion took place this year instead of next.

The younger Fleming will receive the fully transferable "finder's fee" of $5,000 toward the purchase of a new Bass Cat.

"This was certainly something that was completely unexpected," said Gerald Fleming, an employee of Kraft Foods for the past 17 years. "I told my son not to hold his breath until we'd found out for sure (that they'd won), because it all seemed pretty unlikely."

Fleming and his two sons had used the boat for crappie fishing at Table Rock and he said his wife also enjoyed having it around for recreational forays to the big lake that's about an hour from their home.

"It runs okay for a 40-year-old boat and it'll still get up and move pretty good," he said. "The only thing is it's a little dicey sometimes getting it started again after you shut off the engine. It's a good idea to keep it running.

"With a new boat, we'll probably get out and fish a little more, and it'll be nice to see that old one make its way home."
Posted by IBASSIN.COM at 4:29 PM