2012 Aaron Marens is the All-Star Champ!

By Ken Duke
BASS Press Release
This one had it all — long runs, risky strategies, run-and-gun fishing and a dramatic save of a stranded competitor. In the end, Alabama’s Aaron Martens edged out Oklahoma’s Edwin Evers to win the 2012 Toyota Trucks All-Star Week championship. Martens’ strategy of staying close to the launch area to increase his fishing time bested Evers’ choice of making a long, difficult run up the Sangamon River. Martens’ win was the culmination of four days of fishing featuring 12 of the best anglers in the sport on two lakes that presented some of the most challenging fishing in B.A.S.S. tournament history. In the end, Martens’ final day catch of 13 pounds, 8 ounces on Lake Decatur was enough to outpace Evers by 1-4. Martens total was the heaviest catch of the week.

Though there were only two competitors on the water for the final round of the Evan Williams Bourbon All-Star Championship, the day had a little of everything. Evers made a long run up the lake, pushing through silt and mud for more than an hour to reach his best fishing area while Martens stayed closer to the launch area. Evers pitched and flipped stumps and laydowns or threw a crankbait to catch his bass; Martens did the same. Both missed bass that might have been game changers.
“I caught most of my fish on a Bagley Balsa B — chartreuse-and-blue — and a black-and-blue jig with a blue sapphire Paca Chunk trailer,” Martens said. “I covered a lot of water and focused on riprap and shallow cover with good access to deeper water.” He fished the crankbait on a prototype Megabass cranking rod, a Shimano Metanium reel (7:1 gear ratio) and 14- and 16-pound-test Sunline Sniper fluorocarbon line. 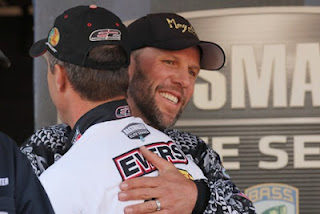 At the end of the semifinal round, Evers was worried about accessing his best water, a tributary on the upper end of the lake that was barred by a long stretch of extremely shallow, silted-in water that took him more than an hour to plow through each way. “I don’t think I can get back to my fish,” Evers said. “That north wind dropped the water level so low that I’m sure I can’t get through.”
Ultimately, he decided the tributary offered him the best chance for victory and decided to risk it. Things went well going in, but there were challenges coming back out.
At 3:10 p.m. CT, Evers called B.A.S.S. Tournament Director Trip Weldon to say he had “fuel problems” and would need a back-up boat to finish the tournament. Evers started the day with relatively little fuel in order that his boat would be lighter and get through the shallows better. Coming out, he ran out of gas.
Eventually, a Nitro back-up boat arrived and Evers was able to finish the day and get to the weigh-in. His decision to risk it all on a daring, mud-slinging, gas burning run almost paid off, but ended up costing him a lot of fishing time and some peace of mind.
“Once I got back there,” Evers explained, “I worried about whether or not I could get back. It took me a while to settle down and fish slowly enough to get bites.”
Evers, who was also the All-Star runner-up in 2011, caught all of his bass on a Bagley Balsa B (chartreuse-and-blue with a black back) and a Booyah Pro Boo finesse jig in green pumpkin. He focused on outside channel bends up the Sangamon River.
While Evers gained his berth to All-Star Week through his 8th place finish in Toyota Tundra Bassmaster Angler of the Year points, Martens was voted in by the fans and was appreciative of the nod.
“I really want to thank everyone who voted for me,” Martens said. “It’s an honor, and I’m glad I was able to vindicate that support.”
Both anglers enjoyed the match fishing format in which they had access to information about the other’s catch. Evers said he “checked every minute of the day.” Martens used the information to make decisions about his methods throughout the course of the day. It was a see-saw battle with several lead changes.
The local sponsor of Toyota Trucks All-Star Week was the Decatur Area Convention and Visitors Bureau.
Posted by IBASSIN.COM at 8:06 PM